SOLVED End of Firefox might be coming for some of us

Yes. sometimes a manual update is necessary. I've had that happen on multiple machines over the years.
They just released 55.0.2: https://www.mozilla.org/en-US/firefox/all/?q=English (US)

It seems it just pushed for me today
The only ones I care about were:

adblock plus (pretty sure they will update this?)
classic theme restorer (dev said he can't update/port this)
download status bar (since the bottom task bar is being removed I dont think it can be updated)
forcastfox (already updated for new ff)
s3 google translator (built in translator, just highlight text and it will autodetect, I can live without it but like download helper, it just makes things easier)
video download helper (there are sites that can grab video and such but having it built in is alot faster) 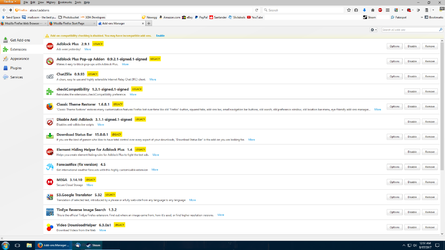 uBlock is considered "better" than Adblock but I think both will get updated.
Classic Theme Restorer has no chance since the entire point is that they will no longer allow modifications of the User Interface like before.

I initially thought a lot of the extensions which are currently being updated (as in the last couple of months) will switch.
But I was wrong, many will not!

I don't think that anyone will stay on Fx57 unless they didn't know that Firefox ESR will still support old extensions *and* get updated until June 2018. So staying on Firefox regular is only for people who don't know that. Or of course if they don't use old add-ons.
OP

But to be clear, for new people, Firefox 57 will be speedier and better. Probably best ever for people starting from scratch.

Vivaldi seems to be working nicely for me. I won't use the majority of customization options, but it seems to have plenty. All Chrome add-ons seem to be available for it. It seems to have some useful abilities, like split screen browsing. Tabs can be arranged in a grid simultaneously although I haven't tried it yet. I do need to get an extension for my email and it looks like there are a bunch of them. I don't look forward to the sorting process there.
OP

Alaric said:
I won't use the majority of customization options.
Click to expand...

Then you are likely losing out, if not now then definitely when Firefox 57 comes out. It will be faster and better and more secure than anything else... at the expense of losing old modifications, but if you don't need them, consider Firefox. If you don't like it, then try it again on November 13, 2017 when Fx57 final comes out.

I dropped FF when they dropped support for my email extension and didn't seem to have a replacement option. It still works in Opera so I've been using it. I found I occasionally need to restart Opera because it gets "stupid" and suddenly slows way down when opening new web pages.

Got my email extension installed in Vivaldi but it's missing some functionality from Opera. The Chrome version of it doesn't work at all, so I installed the Opera version. I hate changing browsers. LOL

One more update. Vivaldi is faster than Opera, and faster than I remember FF being. Even with my lousy internet speeds (6 Mbps max) new tabs/pages load instantly.
Last edited: Aug 18, 2017

Thanks for the heads up! I'm using Classic Toolbar Buttons which has the Legacy icon.

I just now read this thread, which somewhat surprises me. I absolutely despise MS email solutions and web browsing, so I have been using FF for years. I must admit that I have never given Chrome or Opera a really good look. I have been using Betas of FF, which aside from a lack of customization, aren't really bad.

I just found this. http://www.majorgeeks.com/files/details/utilu_mozilla_firefox_collection.html Pick your favorite version (from 2.0.0.20 and up) of FF and enjoy, including Web Developer.

Alaric said:
I just found this. *some MG url removed to avoid free SEO for an annoying site* Pick your favorite version (from 2.0.0.20 and up) of FF and enjoy, including Web Developer.
Click to expand...

There's a much better option than getting a probably-infected-wrapper version from an malware-ridden site full of ads... Just download it from the original Mozilla source. Pick your version from pre-release 0.8 all the way to current.
Last edited: Nov 8, 2017

MajorGeeks is clean. I've never had a problem with anything I've gotten there, and I've been going there since 2005. I wasn't looking for those downloads, I just happened to run across it, remembered this thread, and thought it might be useful to someone. I don't even use Firefox.
D

c627627 said:
I have a single very specific and *very* important (to me) site where RightToClick 100% works. It not working on all web sites is a valid, but separate point.
As far as many of posted extensions above, if they have been updated recently (like uBlock) - yes they absolutely will get support for Firefox 57 once it is released in November. They are not a problem. It was an idiotic marketing-blind move by Mozilla to label every extension with the yellow mark of death when they are in development to be compatible by November.
Click to expand...

Hi, just out of curiosity, does anyone know why RightToClick was removed? It is the best add-on I have. Anyone have the author's contact info? I wonder if he'd be willing for me to take over the project. I'd love to make an Android version as well.
Thanks!

so 4 months later and here we are, Ive managed to retain the look of classic theme restorer for the most part, there is a little wasted space on top, tabs on the bottom
only thing I am really missing right now is download status bar 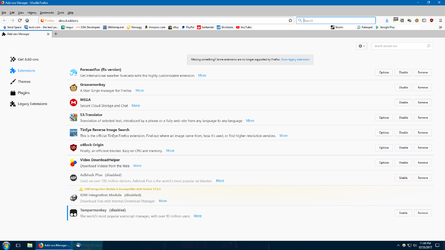 Was wondering what people are thinking about the new Photon multi-threaded. Tried it out for a couple days, definitely faster then the older one but still not good enough (for me ) to make me get rid of Chrome on the desktop. Damned good on mobile though, faster and smoother then any other apart from Maxthon5 and without the useless clutter.
OP

The last most security updated version of Firefox on which most old Extensions and Add-ons will work has now been released.
It is Firefox ESR 52.9
http://ftp.mozilla.org/pub/firefox/releases/52.9.0esr/win32/en-US/

We are in End-Of-Life territory now, in September 2018 there will be a first new security patch which will not be available for versions of Firefox on which old Extensions work.
If you so much as check for updates after September, your Add-ons and Extensions will be permanently gone.

To prevent that from happening, in addition to Backing up your profile of course, here's what you can do:


• You can prevent Firefox ESR 52.9 from being updated, since it is the last Firefox version with June 2018 security updates on which old extensions and Add-ons work. When users click on 'Check for updates' button, they will get a "Firefox is up to date" message even if there are updates available.

• To remove the 'Check for updates' button altogether from an existing profile, use a text editor like Notepad to create a userChrome.css text file inside a CHROME folder created where your default profile is. userChrome.css file can be used for customizations. Contents of the file would include:

I did notice Firefox will update, then tell me the new version isn't compatible with the OS (XP) Well, duh. Seems a pretty dumb error. LOL

Try Basilisk
A XUL-based web-browser demonstrating the Unified XUL Platform (UXP).
This browser is a close twin to pre-Servo Firefox in how it operates. "based on the Goanna layout and rendering engine (a fork of Gecko) and builds on the Unified XUL Platform (UXP), which in turn is a fork of the Mozilla code base without Servo or Rust"
https://basilisk-browser.org/" portably of course
works great. I use waterfox portable with ublock etc, and palemoon with no ublock for the testy sights. Basilisk is like a no-name brand browser.
OP

habbajabba, for people who have used Firefox for 15+ years, they have add-ons, extensions without which they can't imagine using the internet.
Some of those extensions are no longer updated because the authors have moved on/died/otherwise cannot make the transition to modern Firefox Quantum on which old extensions do not work.

Therefore more than 10% of all Firefox users will not upgrade from the current version of Firefox ESR 52.9 because that would mean not using those old extensions any more.

Most would just use Firefox Quantum [Firefox 57 and higher], not another browser, if they didn't care about their old Extensions.
Firefox forks and knock offs by definition get their security updates later than original genuine Mozilla Firefox, but this is the big picture: there will be no alternatives to Firefox ESR 52.9 because there will be no browser with better security updates on which old extensions still work. Firefox ESR 52.9 is it. So we're trying to keep it in place because it will be force updated unless you take steps to disable force updates, as outlined above.

Force updates are not bad. It's just bad when you can't disable them. But you CAN disable force updates in Firefox. You can still do pretty much EVERYTHING on Firefox ESR 52.9. Customize absolutely everything. That's why it will never be updated on 10%+ of all Firefox machines, we will gladly sacrifice security in exchange for using a fully customizable browser where we are in full control of how everything looks and feels and performs, being able to enable/disable even the little things. Can't give that up, at any cost.

c627627 said:
Therefore more than 10% of all Firefox users will not upgrade from the current version of Firefox ESR 52.9 because that would mean not using those old extensions any more. ... That's why it will never be updated on 10%+ of all Firefox machines
Click to expand...

I think you may be seriously self-projecting and over-estimating how many people are using dozens of dead and near-useless extensions.
Last edited: Jul 7, 2018
You must log in or register to reply here.

Overclockers Mobile - There's a NEW App for That

T32 EOC WIR 5Jul19: Celebrate the Birth of Your Nation by Blowing Up a Peice of