We are slowly gaining on these same three teams. The key word here is “gaining”. We are a dominating force.

It looks like the 1.2 million ppd group needs a “breakout” event. These guys are so close we can’t see the gap with an electron microscope.

There is a lot of movement in this list and a lot of potential in several groups like the 100 million point group. They have 11 members earning their way up the ranks. Good job by all here. This is the list that favors no one. If you earn, no matter how much, you will get listed here as you move up. We are proud to annotate your achievements.

Please give a warm welcome and “Congratulations” to petteyg359 who moved up 1 spot and joins page 1.

There is some movement here. It is hard to move in these ranks yet our members are doing so. I see others who are close to the top 100 in the world so let’s get out there and do it. 

Until next week:
Build, Borg, Recruit.

It looks like the 1.2 million ppd group needs a “breakout” event. These guys are so close we can’t see the gap with an electron microscope.

AnubisOne
KingScrud
KhronosTheTitan
don256us
gabi golan
SubPar1
and the late eQuinOx who still folds from beyond. RIP.
Click to expand...

Hey, what about me? Your going to have to amend that list in a few days

WhitehawkEQ said:
Hey, what about me? Your going to have to amend that list in a few days

AnubisOne said:
You will be one spot lower if my 980 has anything to say about it
Click to expand...

You guys are killin' me.

If you earn it, I'll reduce it to writing. 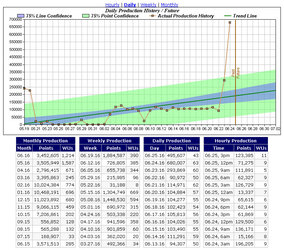 ^^
That is awesome. Great work.

I'm moving on up 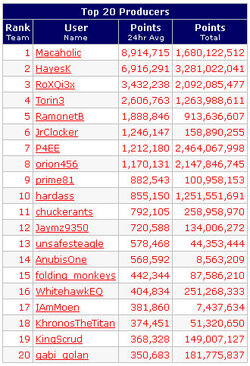 oh Don, where did you go to? you were on the list

I'm back up to around 700k ppd. We were over two days without electric. Things are good now though.

don256us said:
I'm back up to around 700k ppd. We were over two days without electric. Things are good now though.
Click to expand...

Ouch, glad your back.
OP

You know that I will have to attempt to beat your ppd right? Just sayin'.

I would hold tight for a month or two before pulling the trigger. I've been burned on ppd pipe dreams before. (read Radeon X1000 series)

Hey AnubisOne, someone is knocking on your door 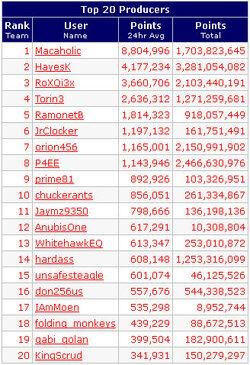 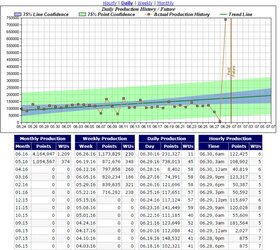 Hey AnubisOne, someone is knocking on your door

Looks like I'm going to have to step my game up hardcore if I want to stay in the competition. Those are some good looking numbersWhitehawkEQ!

My apologies to the team. I left town early Monday morning, storm shut down the juice that night. I just got home to find the big Nilly for four days. I gotta teach the missus how to boot up the Folding app. She was here keeping the home fires burning, all 'cepting the Folding Fire.