I will not be able to write a review tomorrow so here is one a day earlier.

On the team front, we have no one on our threats or conquest list. That's OK for now. We have successfully warded off two teams that were gunning for us. The current rise in ppd has also slowed the rate at which the top five teams increase their gap. We will keep chipping away at this and eventually start to make gains towards our coveted #5 spot.

Locally, Macaholic and HayesK have been going back and forth. Mac had taken the lead in this race for quite a while before Hayes took a two week lead only to have Mac com back this week. Mac is earning about 5.6 million with Hayes earning about 5.2 million. If you are following their banter back and forth on the MEEP! MEEP! thread, you'll see that they may produce even more before the heat of spring forces them to cut back. Great job guys.

Of special note, RoXQi3x, Torin3 and RamonetB have all increased production. RoXQi3x is earning over 3.1 million, Torin3 over 2 million and RamonetB over 1.9 million. Very nice.

One of our newer folders, ConundrumLR is looking to break a million and may himself be in the top ten soon. The top 20 round out with t1nm4n, chuckerants, Jaymz9350, JrClocker, KingScrud, zspaldin, eQuinOx, KhronosTheTitan and gabi golan.

Here is the big news for individual achievements!
orion456 will reach the 2 billion mark in 5.4 days.
Torin3 will hit 1 billion in 6.6 days.

Guys! That's BILLION with a "B"! Let that sink in a bit. They will be joining the likes of HayesK, P4EE, RoXQi3x and hardass in their respective milestones. This is a big deal. Please congratulate these guys on their new achievements.

This weeks review will be cut short but there is plenty of movement in the ranks to be proud of. Folders are producing more, moving up the ranks and hitting milestones. Even those who are holding their production steady are a great asset to the team.

Keep up the fold guys.

I enjoy your updates.

Thank you for the updates. And while I'm stoked about the new milestone coming up, it is Billion with a B, not Trillion.
1.0x109
OP

torin3 said:
Thank you for the updates. And while I'm stoked about the new milestone coming up, it is Billion with a B, not Trillion.
1.0x109
Click to expand...

I use the new maths. Thank you for this very important distinction.

In my defense, the word "trillion" does start with a "t" even if it is the wrong word in this case.

I too enjoy these stats, and the Meep Meep thread is legendary.

I seem to be doing a little bit better than the laptop I had running in 2013.

Maybe that new desktop you built it slightly more powerful. 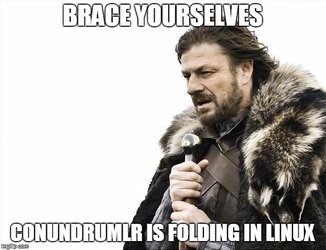 Don, I really enjoy your weekly updates. Lots of fun to read.

@JLK03F150 your finally going to pass me

Might just have to do my taxes and buy that 980gtx I have been looking at that would hold you off . ( with what I have added over the last day should be around 100k ppd)

Looks like you are really starting to pick up some steam.

I have another 6950 sitting in the basement, but I'm modding the case and can't find the time to finish it.
You must log in or register to reply here.

Looking good and even gooder than before.

Quick update on some milestones.

An auspicious day. 1 Billion and 100 million plus 40 million. All on today's ep