Overclockers is supported by our readers. When you click a link to make a purchase, we may earn a commission. Learn More.
H

my gpu is the only part that was not brand new and came from my old computer and was only about 6 months old.
so i ran occt for 12 hours cpu was fine , i ran real bench for 1 hour everything was fine. so im pretty sure the cpu was stable. so i played league of legends for about 45 mins was fine and csgo for about 30 mins and was fine no issues. Then i played overwatch for about 30 mins and randomly the pc completely turned off. my asus board shows the qcode d6 and the gpu lights up and fans spin but i have no display. the gpu was not overclocked by me however it does cone factory overclocked and im pretty sure the temps were below 80 if i remember right as i had gpu-z on my other screen while i was playing. i tested the gpu in my old build and the gpu error led lights up and i have no display so im pretty sure the card died

i have warranty still and im going to RMA the card so that is not a issue but im scared to put the RMA card back in as i have no idea what caused it. the card is pretty close to the res and the 3rd fan is kinda blocked but temps were definitely below 80 so i don't know why temperature would be an issue, maybe it was just the gpu died but im just sceptical because i just built the pc so their must be a issue elsewhere that caused it 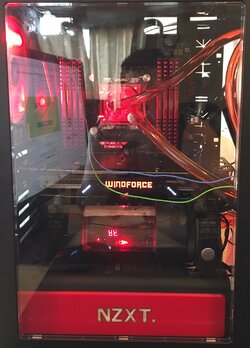 thanks for reading and i will appreciate any help guys
Last edited: Jun 10, 2016

Double check you have no leaks in the block or fittings at the CPU.
OP
H

ATMINSIDE said:
Double check you have no leaks in the block or fittings at the CPU.
Click to expand...

checked there does not seem to be any leakage

I don't see any other reason off hand it would have died.
Just toss the new card in when it shows up.
OP
H

ATMINSIDE said:
I don't see any other reason off hand it would have died.
Just toss the new card in when it shows up.
Click to expand...

Yeah 850 should way more than enough
You must log in or register to reply here.

T
I have multiple systems to build - need ideas on budget builds.
2