Should have left it boxed and sold it lol

Nebulous said:
So at this point I'm not so sure I should even send it back and accept EVGA's offer to "be happy to reach out to a supervisor to discuss options for replacement".
Click to expand...

Fired another email to EVGA support and this time I didn't hold back any punches. I expressed my utter disgust and anger with this pos power supply.

Like... read Blaylock post again. This is a normal rma process outside of the new unit not working. You simply ask for an upgrade since yhat model clearly doesn't work. No need to be an arse.
OP

I wasn't an arse. I just explained, in detail, how I feel about this whole ordeal is all. Hopefully I'll get a replacement that isn't another GQ unit.

Well as usual they approved RMA.

Sorry you are still having issues with the 1000w GQ power supply. The power supply you sent us passed all our testing, and each unit is tested before shipping out. That said, I've set up a new RMA for you so we can get another model power supply sent out. You should have a Step 1 confirmation email. Once the RMA is approved you'll receive a Step 2 email with packing and shipping instructions. We'll also be providing another shipping label for this replacement, it will come as a separate email from UPS, not EVGA directly. I've also upgraded the shipping speed for this next RMA to help reduce any downtime. I apologize for any inconvenience.
Click to expand...

Then why do I keep having issues with the GQ line? No issues with the 850 GA nor the P6. They sent another email with the return instructions and of course not to send in the cables. I'm not keeping the dam cables. I have a funny feeling they're going to send a 4th GQ. If they do, I'm going to blow a head gasket I just told them I want any other 1000w unit, but NOT another GQ. I'm not going to build another rig so it plays nice with the GQ because it fails to work with my current machine.
Last edited: Sep 20, 2022

Interested to see what they say/send you!!! Maybe it's almost over?
OP

Got a shipping invoice from EVGA. Looks like they're sending me a 1000 watter G5. Still an FSP build. Guess this is the best it's gonna get. I have til Oct. 4th to return the P6 back to amazon for a refund. Sad part is the G5 won't arrive til the 4th. 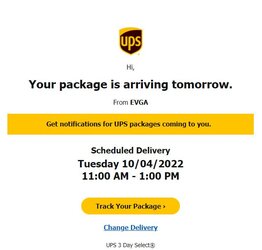 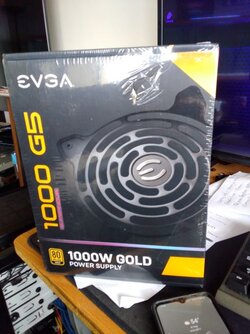 Now I'm undecided wether to open it up and run it to see if it fixes my issues with the games and PSU, or leave it sealed and sell it. Dam shippers gouged the front of the box and laid it facedown inside the shipping box. Slick farkers!
OP

Ok here's the final word on this. PSU works great. No issues as far as power is concerned. As far as weight is concerned: The P6 (Seasonic build) weighs alot more than the G5 (FSP build). Both units are the same size physically.

Issues are game related. I tried just about everything I know and then some to fix as many borked games as possible. Out of 10 games, 3 remain borked ( FC5 addon; Hours of Darkness ) crashes or hardlocks. FC6 crashes or hardlocks. TC Wildlands still crashes. TC Breakpoint runs fine, go figure. So 7 games thus far run fine, 3 do not.


Last 3 parts left of the rig is CPU, GPU and Mobo. I've swapped Power Supplies, ram, harddrives. I've done 2 total reinstalls from scratch. No images. I've broken the raid array and installed games on a single 500gb just to rule out raid issues. Same games run fine, same 3 do not. Recreated the new array and reinstalled the games from scratch. Will continue to install other games to see if any are borked as well. As for power issues, the G5 is running the rig fine for now. I can swap video cards and toss the 1080Ti back in if the issue is with the 3080. I'm hoping not, but anything is possible, right Joe? Don't have any means to test Cpu in another board and vise-versa with the mobo.

We're a few pages deep now and I don't remember if anyone has asked yet, but is your GPU driver current? Have you tried a different driver version?
OP

Blaylock said:
We're a few pages deep now and I don't remember if anyone has asked yet, but is your GPU driver current? Have you tried a different driver version?
Click to expand...

I would try rolling back to a year old driver.

Between the three threads covering this issue, not sure what was/wasn't done at this point, lol. I just know it's not the PSU and Neb owes EVGA an apology...

What hasn't been done? Amiright?

You on a roll Joe! You made me laugh several times today!

So true, you've done everything except swap GPUs which is a monumental PITA with custom water.

EarthDog said:
So true, you've done everything except swap GPUs which is a monumental PITA with custom water.

So true! But if it has to be done, it's gotta be done