This game is wicked good. It actually runs properly... which is saying a lot for a Ubisoft game. Incredibly, FC Primal and Watch Dogs 2 both run properly on PC.

Anyways, In Primal, you play a cave man doing cave man things and trying to re-unite your tribe. I've played 2 hours and already I've hunted mammoths, frightened away giant cats, shot goats with arrows, and I tripped out after drinking rat blood mixed with my blood and some plants that made me trip out and fly around after my own spirit guide. This game has totally sucked me in.

If you've ever wanted to be a cave man, now is your time.

I've heard the game is pretty good, but gets a little repetitive and still follows the basic formula of FC3/FC4 if you liked those. I think the overall impression was that the game was decent, but much better for a large discount and not full price.
OP

Ok, been rocking the cave man for a few hours now. You play a guy who eats raw meat and kills without compunction. Your clan/tribe/whatever has been scattered into a new land (didn't catch the name of the new land)... anyways, your job is to reunite the Weenja, a clan of not-too talkative, terrible AI friends who you will have to guide past enemy tribes (so far we're fighting some aggro douches in red loin-cloths) and tigers and stuff to safety at new villages. Like previous Far Cry games, you need to turn something on/light something on fire to reveal more map. In this case they are bon-fires.

Whether it's throwing a wooden spear through a guy's head or shooting a goat in the butt with an arrow you made out of a twig so that you can eat it raw to regain health and make stuff out of it's skin, there's always something fun to do. This is the first game where I'm actually afraid of the wildlife. It's not like most games where you're walking along with your rocket launcher and your assault rifle and you can mow down those critters. If I see a pack of giant sabretooth tigers coming at me and I'm down to 2 spears and 2 arrows, I'm going to be scared. You really need to pick your battles in this game. Speaking of critters, there are a lot of critter on critter interactions. I'll be staring at a group of (insert vegetarian mammal) and a pack of (insert predatory mammal) will chase them. It's really cool.

This is not a great game, but it is DIFFERENT in a sea of monotony. I'm playing this one to the end.

Three bashed in neanderthal skulls out of five. ***
S

I picked this up on steam sale months ago, but been to lazy to play it.

Give me a reason I should play it right now.
OP

Shiozaki said:
I picked this up on steam sale months ago, but been to lazy to play it.

Give me a reason I should play it right now.
Click to expand...

30 minutes into the game you're tripping on rat blood and flying around with a glowing owl.

I've been playing FC4 since it came out. Just got the Valley Of The Yetis DLC. Can't for the life of me figure it out as I'm always getting pwnd by the dam sabrekitty right at the start

Tried it.. wasn't my thing. I just benchmark it at this point.

Haven't gotten to this one yet. I do enjoy the FC series though I do think #2 was one of the better ones. The open map is cool but as has been said can be a bit repetitive. That's where I thought the side missions helped. Finding collectibles etc. broke up the raids/main story a bit.

I like it..picked it up for $19 and I think it's worth it for that price. As mentioned it runs like a champ and is pretty fun
OP 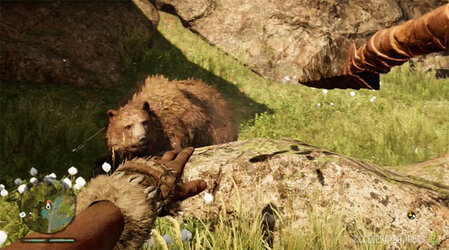 Like this bear is going to cry when this spear hits it. Gotta use the spear on the big critters. Arrows just make 'em itchy 'n angry.

I just took down my first mammoth! A jaguar tried to steal the kill from me but I clubbed it tah death. And I raided a village of sleeping red loin cloth tribe people and murdered them all in their sleep with a spear.
What a freakin' awesome game...

I have been taking out blue face paint guys now. I seem to have strayed into their territory. Took out a whole bunch of em in a cave. I'm finding that in battles with 10 or more enemy cavemen where they swarm you can just sprint through the herd, launch a spear at the one in the middle, he flies back, you run over him and collect your spear, turn around and charge again, rinse, repeat.
Last edited: Dec 9, 2016

Nebulous said:
I've been playing FC4 since it came out. Just got the Valley Of The Yetis DLC. Can't for the life of me figure it out as I'm always getting pwnd by the dam sabrekitty right at the start
Click to expand...

I'll probably get Primal...but flying a one man chopper is tre' fun

Got it yesterday and going to try it later on, this is an open world game with collectibles scattered all around or did i misread the review ? thought it would be more CPU intensive especially with the HD Texture pack/DLC.