Overclockers is supported by our readers. When you click a link to make a purchase, we may earn a commission. Learn More.
OP
E

Oh, yeah, completely forgot about that. thanks a lot for the reminder and process steps.
Should I do the same with pump and other blocks ?

For the blocks and pump it wouldn't hurt to do that some say its not needed while others do it regardless.
But most importantly is your radiators the water, once you flushed cleaned the radiators must be CLEAR so not any debris or particles NONE keep doing the process as i mentioned in my last post. And shake like mad This may take allot of time so keep repeating the process until your sure its clean. Only use distilled water boil it let it cool a bit till its hot/warm then use it. After every flush poor it in a bowl or bucket never re use that water inspect...

And yes also flush your tubing one or two flushes should be enough.

If this is your first time with water cooling i highly advise you to use "Aquacomputer Dr. Drop" its a air pressure device that spots leaks easily without the need to leak test with water its very fool proof and you can go to bed without the worry "if there is a leak while leak testing". Its also easy to remove any faulty fitting with out draining the loop. It spotted a leak with my setup i used a q-tip with warm water and lots of soap to spot the fitting it was a life saver. Once after 6 hours of air pressure (read manual carefully and test the device if it works on its own) the gauge still hasn't moved ie still at 0.5Bar then its 100% leak free or if it decreased by 0.02Bar from 0.5Bar that to is a pass since difference in day and night temp and thus pressure. Then fill the loop with coolant of choice let it bleed then after that your good to go. Make sure if you use the device that your rads are good for 0.55bar of pressure check manual or contact EKWB. This is handy because once you have to drain the loop with your coolant its a waste since you might want to re use the coolant but...by that time its contaminated with dust and other crap.
Dr. Drop is pure air no coolant usage.
Last edited: Dec 6, 2016
OP
E

Is demirnealized water ok for cleaning rads ? To my big surprise, I can't find any distilled water anywhere near where I live.

I believe they are pretty much the same, I've heard a lot of people say you can use either.
OP
E

So, It took me 2 full days but in the end I made it 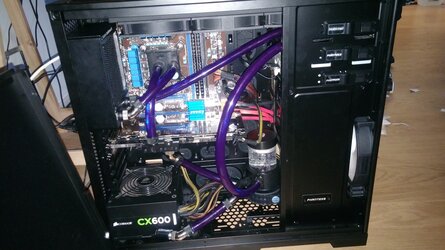 Overall it looks good. I just though I bough standard color dye but I bough UV dye; so I guess I'll have to buy some UV light to put in the case now

My remarks concerning the whole process :
-I would never have done properly without all your advice. Thanks a lot guys
-10/16 soft tube is really hard. I though it would be bendable, but it's not. I had t re-think some connection in order to avoid to much torsion on the block's inlets/outlets.
I added some 45° angled fittings to remedy that.
So if I ever do this again, it will be 12/16 soft tube or hard tubing. Because I really had a hard time screwing the tube on fittings already attached to blocks without putting to much pressure on the blocks.
-I didn't had a funnel to fill the tank. I should have search to get one, because it was terribly slow without it.
-Cleaning rads did took a lot of time. It took me like 4 hours to clean the 120.3 and one hour for the 120.1. at one point I though it would never come out clean. But damn, the amount of nasty I pulled out was high.
-I air leak tested by blowing in the tubes. went fine to have a rough idea of "are all the cables connected". Then did filled the premix.
About 5 minutes in I saw that the ball valve (output of my purge tube) is not watertight. So I had to use a fitting blocker at the end. (the one that goes on the fill port of the pump. The pump has the plastic blocker given with the rads right now).
Then all bubles came out. 2 actives hours and 1 night at rest later, I plugged everything back on mobo.
-The case is good, but careful to the length of your fan cables. They are spread around the case, and one may have trouble with short cables. It goes for HDD/SSD too.
-I could have gone with a taller res. It fits just right to the 1080GTX.

Pros :
-It can finally be dead silent !
Thought I though fans would be quieter than that. I can modulate them when doing basic stuff to almost stop, then no noise at all. I looked at the temp, and for basic usage, I don't even need to start the rad fans.
However when I make them running 1100RPM, I hear them more than I though. But from what I benchmarked, It doesn't even raise 10°C when using 3DMark and stuff like that. (rest values are around 32°C).
So I don't think I'll ever be using the fans at full speed.
-The temp doesn't raise to 75°C when I start a game It stays at 45°C max.
-Looks good ! but I need some lights now !!!

Issues yet to be resolved :
-The 4th SSD slot (behind the motherboard) and the 5.25 external bays of this case require you to have flat SATA cable. not those with a 90° angle between the cable and the head you connect to your drives/CD-tray. Right now my cd-tray is 1 inch inside the case because I could connect the sata cable otherwise. I'll have to buy 2 SATA cables with flat heads. Right now My main SSD is hanging loose in the cables; not fixed on the case.
-Because of the 45° fitting, I can't put a fan inside on the 120.1 rad. So I'm struggling right now to fix it properly outside of the case.

Anyway, Just thought I should leave my feedback here (or somewhere esle) if it can help any newbie like me in the future.
Again, thanks a lot to your amazing tips to avoid traps and gotchas ! really helped me a lot.

If you want more pics of the case/build I have some. Just don't want to pollute this post unnecessarily.

Great job on your fist loop.

Just keep an eye on it from time to time till things settle in.

Congrats on your first build!!

Better safe then sorry with the cleaning of those radiators but hopefully in the end they are clean, even though it took some time. This is why i purchased Aquacomputer AMS radiators no solder flux no crap (round tubes).

Post some temps of both your cpu and gpu at IDLE and FULL LOAD, and your room temprature.

Have fun with your new build!
OP
E

I run fans at 1100RPM. Could go up to 1400RPM but it becomes noisy and temp is pretty much the same.
Intake fans actually play an important role.
Idle without intake runing ramp up to 40°.
OP
E

I'm a little concerned by my pump liquid level. the build has been running every evening for the last week, and I noticed a drop in the liquid level.
It's 1.5 mm, so not that big but still noticeable.
I checked everywhere and could not see any droplet or dried drop that would have leaked. I even put paper towel everywhere again to see, but it remained dried.

Could it be air bubbles that keep getting pushed out of the system even after a week ?

not something to be over concerned with, there is still air trapped in your loop and as it all gets moved and pushed towards the air in the res it will drop a lil, mostly depends on how much volume of fluid you have to work with and how many nooks and crannies lil air bubbles can hide them selves from the turbulent times they are facing. Air bubble always holding on to individuality until the end, and they always seem to be much happier when they join the fold

But always check fittings and connections for what looks like mineral marks, or where water have evaporated and left it's mark. It took my loop about 3 weeks to stabilize and all the air to move to the res, even then it freaked me out when I caught an air bubble get blown into the res after about a month, I went on a search for the leak only to find nothing, it was just the last hold out