I changed the title a little due to a great suggestion by ED. And thanks to ED for the review of this board that got me interested in it.

I went outside my comfort zone with the mobo, CPU, and a real case (Phanteks Enthoo Luxe) for what is now my current rig. The case is phenomenal. It isn't just the room (there's lots), or the cable management (it's excellent), the RGB lighting (looks great), or the airflow (again, lots). The access to everything is what I love most. When my new graphics card shows up tomorrow it should take about 60 seconds to install because there is nothing in the way. And more HDD cages than I'll ever need. I could (almost) build a server farm for youtube ads. Finally, realizing taste is subjective, it's a good looking case. Definitely a

I've always used Asus mobos, and after some iffy reports about some Giga AMD boards a couple years ago, I stayed away from them. Live and learn-I love this board so far. It looks good, has RGB lighting options for the board, back I/O panel (I can actually see where I'm plugging stuff in without dragging the whole case out), and the audio section. Speaking of audio, that was always a sore spot for me on motherboards. The Realtek chips common on Asus boards sound like crap. This board doesn't make me want to clean my ears with an icepick. After installing the sound utility from the driver disc and turning off all the "enhancements" I ended up with clear, detailed sound, without being thin or dry sounding. Very musical. My only nitpick with the board so far is the RAM slots. They could be a little farther apart. The TridentZ sticks are packed against each other due to the thick heat spreaders. Since they're on the QVL it would have been nice to account for their size. And the RAM defaulted to 2133 MHz, but it was easy to go with the XMP profile in the BIOS so no points off for that. All in all a great board with what appears to be everything needed for some OC. Running at 4400 MHz now. Oops, one more small gripe. No PCI slots. My TV tuner card won't go in the mobo, so I'll be waiting for the new tuner at the end of the month. All things considered though, another

I expected a big performance jump going from the Vishera to the Skylake but for the little stuff I mostly do it hasn't been that dramatic. I expect gaming will improve and as I do more I'll see more of a difference. The SSD isn't too shabby, either. Opening the Event Viewer was instant. That's my big test so far, but going from 15-20 seconds to no wait at all was huge. I was unimpressed with the boot time at first, but of the 40 seconds it took, 30 of those seconds were the mobo splash screen. So about 10 seconds to the desktop with a 7 character password. Nice. And again, a

Overall I'm very happy with the build. Web pages render much faster, and it isn't just W 10. Across three browsers (including Firefox) long/difficult pages load immediately. That's using my old graphics card for now so the speed is coming from the new rig. I thought a lot of my online slows were the crappy internet connection. Not so much.

I can definitely recommend this motherboard, especially if you're considering another board and a sound card. It sounds good enough for me to put off an outboard DAC for a while. It looks great, has plenty of features, and wasn't too expensive. I can recommend the 6700k too, but everybody knows about them.
Last edited: Jul 11, 2016

Maybe I'm just going blind but I read your post more than once and don't see that you mentioned the make and model of the case you speak of nor does it seem to be in your Sig.
OP

trents said:
Maybe I'm just going blind but I read your post more than once and don't see that you mentioned the make and model of the case you speak of nor does it seem to be in your Sig.
Click to expand...

I'll get that fixed. Should have posted after the early AM coffee.

Still haven't finished cleaning up, and haven't prettied up the wires yet. But it lives! 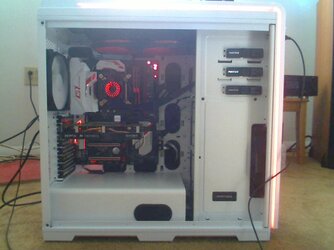 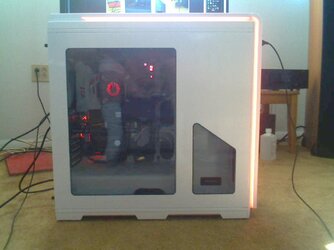 And the I/O LED lighting. 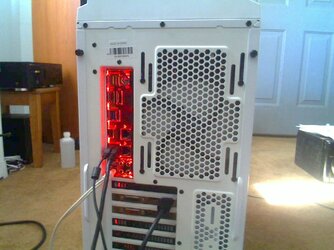 clean white theme, the case and board go together well.

I need some leds for my PC

Thanks, guys. The LEDs came with the case and mobo, I didn't have to go shopping for them. I love the case. The PSU cover and great cable mgmt. are what let me go with white. I think it came out very clean looking. Since my walls, ceiling, and TV stand are white I really wasn't looking for a big, black monolith in my living room. "Open the pod bay doors, Hal". "I don't think so, Dave".

Extra points for knowing what movie that's from. LOL
W

I would not worry about Intels XMP (Extreme memory profile), not enabling automatically because that is overclocking past intel's speciation's for the CPU's so most boards don't enable it, you have to.

The GIGABYTE G1 Gaming GA-Z170X-Gaming 7 ATX is the Best selling Z170 board from gigabyte at Newegg, my GIGABYTE GA-Z170-HD3 is second best selling.

I had to disable my sound card (Sound Blaster Audigy 2 ZS) it was interfering with sleep mode, intermittently my screen would go black however the fan and lights would stay on when entering sleep mode then I have to use the reset button on the case.
OP

I had decided to get an outboard DAC instead of a sound card before this build. I very much expected the audio to sound like a bag of cats in a dryer, but it surprised the heck out of me. I can live with it for most things. I believe the sales numbers for this mobo. The next one up in the series (and with that color scheme) is $300. Yikes.

The case is cool in a couple ways. It looks good, but my temps are only in the mid 30s nd the ambient is pushing 90F. With all the fans cranked up I can hear it but it isn't particularly intrusive. My h100i sounds like an F-15 spooling up. I may take the money I saved on the DAC and throw another RX 480 at it. Nothing like overkill on a 1080p. LOL

the sound on the later boards is really getting a lot better so a sound card is not at the top of the list anymore...........and we are aging and going deaf so that helps also.

^I love this case! BTW, i put back the inside side panel... Lokks less like Mad Max rig!
One thing though: clean the filters often (front and top). They tend to catch dust pretty quickly.
W

I was trying to look at your Picture and I can't make it out, do you have you memory in the a joining slot? that would be single channel for intel.

I have the 4 sticks in quad (black slots).
Sorry for the poor quality... 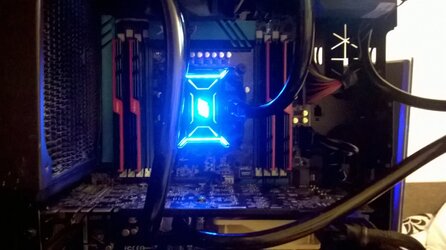 I was asking Alaric?

caddi daddi said:
the sound on the later boards is really getting a lot better so a sound card is not at the top of the list anymore...........and we are aging and going deaf so that helps also.
Click to expand...

WHAT? PUT YOUR CAPS LOCK ON! I CAN'T HEAR YOU!
OP

wingman99 said:
I was trying to look at your Picture and I can't make it out, do you have you memory in the a joining slot? that would be single channel for intel.
Click to expand...

Yeah, they are next to each other. I misread the manual. Looked it up when I saw your post. Good catch! I'll be fixing that now.

caddi daddi said:
YOU'RE OLD AND DEAF SO IT DOS'NT MATTER[/SIZE]
Click to expand...

WHAT? I'M MOLDY AND DAFT??? THAT'S NOT A VERY NICE THING TO SAY TO A SENIOR, UMM, WHAT WAS I TALKING ABOUT???