First time DIY water loop and having some issue -- PLEASE HELP ME!

Hi Everyone,
I've recently installed a water loop but I'm running into issues and I'm scratching my head trying to diagnose the problem. Figure I'll turn to more experienced heads.

Firstly - Here are the components
All the parts are from Thermaltake

So here's the run down. I pulled the closed loop system I had on the computer and began installing the open loop. Once it was all set and down, I put some coolant in the fill port and then fired the pump on. I continued to add coolant until the reservoir was about 80% full after shutting it off and on several times.

Now the issue, I have a huge air pocket at the pipe leading from the radiator back to the pump (the final leg). I've tilted and twisted the computer all which ways trying to get the air out. It's gotten better but still there. Here is the biggest issue I have, I've stressed tested the computer and all the cores get above 50c and the computer starts stuttering. Clearly something isn't right here, the water cooling isn't cooling. Could it be the air bumble? I don't see any other in the lines.

Here's what I've done thus far to try to fix it. I've removed the waterblock and wiped away all the thermal paste and reapplied a pea size spot (i went overboard on the initial install). OH one last thing, I left the system running for 18 hours and there have been zero leaks. 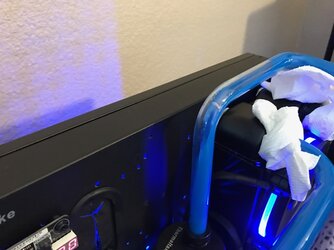 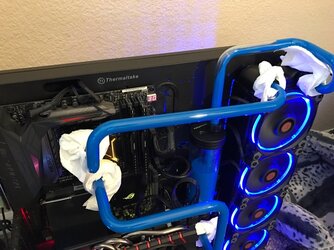 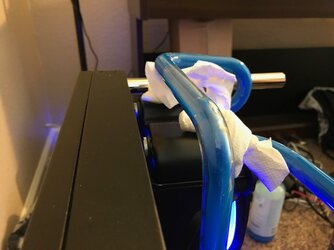 Die is bad idea though... better use colred tubing as it will clog your loop, sooner or later.

Edit: it is also perfectly normal that the computer "stutters" when running stress test, as there is not much resource left (if any) for other applications.

Yes, colored dies/fluids is not recommended as the fluids will break down and will start to get "jellied" and clog everything up. Best fluid is distilled water + a biocide and clolored tubing is the way to go.

Only way to remove air pockets/bubbles is to keep tilting the case and powering the pump on and off. No other way to remove trapped air.

One thing I find that helps is of you have the Pump hooked to the mobo and it is being speed controlled. Lock it in manual at 100% for awhile to help push the air through.
OP
M

Hmm I haven't thought of that. I'll try to figure out how to adjust the speed control that way. Thank you!

Air pocket or not. I just want to say I really like your setup. Looks very slick.

I am tempted to try to go a little more showey with my loop, but until I get a glass side for this storm trooper case it is pretty pointless.

Anyways Just wanted to commend you in a great looking loop!!

Lochekey said:
One thing I find that helps is of you have the Pump hooked to the mobo and it is being speed controlled. Lock it in manual at 100% for awhile to help push the air through.
Click to expand...

Once the pump(s) are primed and you're set, close up the reservoir and ramp up the pump to max speed. It surely will help get rid most of the bubbles. It can take days, weeks and if not months for all the bubbles to head out of the loop completely but you should be ok regardless.
You must log in or register to reply here.