Hey guys i decided to water clock my pc mainly due to reduce the noise of the gpu fans and system fans, and also to reduce the temps of the gpus as they were at 80c under load.The following are all the parts that make up the pc.

now on to the build and photos

I first striped the case of all the plastic bits and left the bare metal case and started fitting the phobya 200mm rad to the front of the case.To do that i first cut off the grill and made the opening bigger to maximize the amount of air going through the rad. 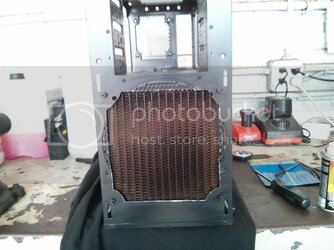 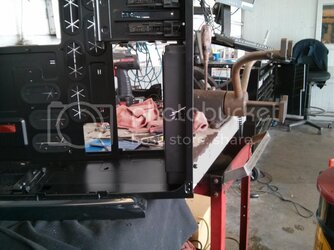 Next was to mount the top ek rad, I installed the motherboard and found that the rad was not going to clear because the heat pipe block on top was in the way.To solve this i cut a flat metal piece to protect the fins and tubes and started trimming the radiator as to clear the mobo. 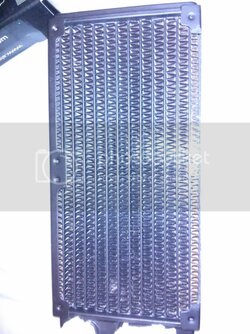 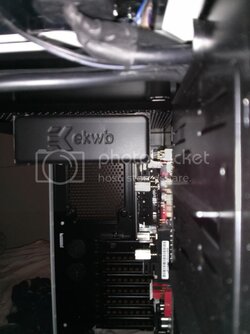 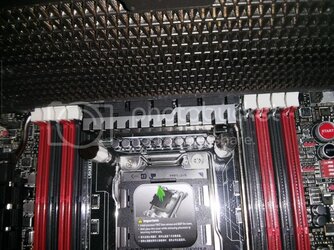 Next i installed the fan controller and the 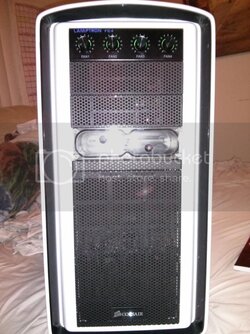 After that i started figuring out how and were i was going to mount the pump. I first used the stock mounting bracket that came with the pump but it didint work with the inlet and outlet positions.I ended up using the brackets that come with the bitspower 150mm top upgrade.I also ran the inlet line from the
rez and the outlet to the front rad. 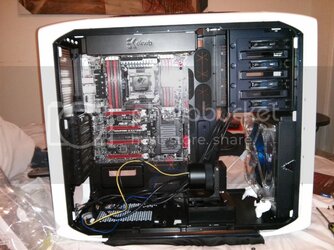 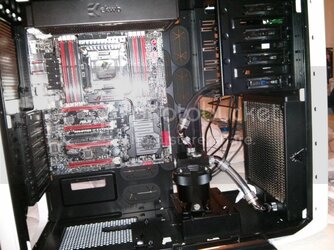 Next was installing the ek water blocks on to the gtx680 ftw 4gb cards.This is the part i was most concerned because it was the first time taking a gpu apart and didn't want to ruin them.Also i could not find any specific water cooling blocks that were made for the 4gb version and on the ek website said that it should fit but was not confirmed.I ended up using the cross method to apply the paste.What i did find was that since i have 2gb of ram on the back of the pcb board and the backing plate is what keeps em cool i was forced to reuse the back plate.The ek kit comes with m3x4mm bolts and i could not use those as they were not long enough to re attach the backplate.I took a trip down to marshals hardware store and bought 20 m3x8mm bolts and those worked like a charm to re attach the backplates. 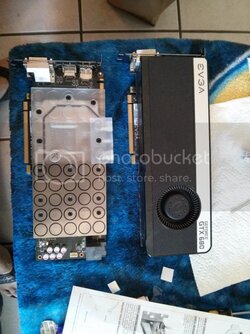 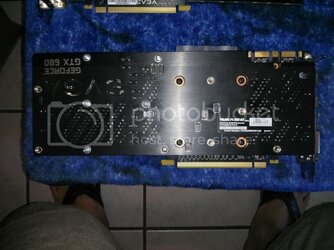 Once i had the gpu's installed and the cpu block installed it was time to run all the rest of the lines to complete the loop. 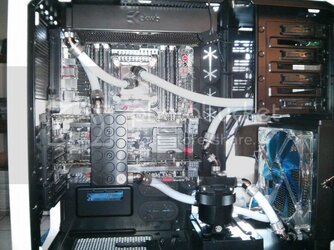 All wired up and running 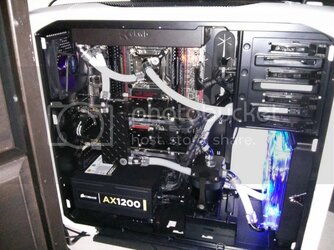 Over all i am super satisfied with the results my pc used to be super loud when i was gaming or even just at idle.Now you cant even hear a noise at all even with the fan controller all the way up.I was also very happy with the temp drops. While running heaven benchmark on ultra settings with a single 1920x1080p display my gpus would reach 78-79 c, my cpu under load with an h60 would get to 65c-70c. Now when i run the heaven bench mark my gpus dont pass 48c, and my cpu under full load stays at 50c using intel burn test.

Although i like to say that the AX1200 is somewhat overkill for that set up, AX850 should be enough.

^Overkill...pfft doesn't exist in this game

OP- Good job, are you doing any overclocking? I thought for sure you may need a bit more RAD. But nice Temps! You have to agree it's so nice to not listen to your fans ramp up while trying to game.

Nice setup, thanks for sharing!

Run Heaven AND Prime 95 small ffts at the same time 30 minutes for us? Kinda the ones we use to compare here. Also what is your room temps?

I have intell burn will that work. What's small ffts new to the benchmarking scene also any particular settings on heaven I usually run it on max settings... I'll check my room temp when I get home from work..
OP
S

I have intell burn will that work. What's small ffts new to the benchmarking scene also any particular settings on heaven I usually run it on max settings... I'll check my room temp when I get home from work..

Prime 95 small ffts is a good CPU load test small ffts loads the CPU more than blend. Intel burn in puts more stress on your CPU than anything will ever. It works but its unrealistic. Heaven as your using it is fine. Using both tests at the same time stresses the CPU and gpu best for a single loop system.
OP
S

Thanks for the kind words. I have another question since i have the asus mobo it came with software to monitor cpu temps and for gpu temps i use the evga overclock software, i aslo have speed fan i think its called.The last time i tested my temps i had the asus software and speed fan both on and the temps didint match asus software said 50c for the cpu while speed fan kept saying 33c . what gives with the miss matching numbers?

Are you overclocked? CPU GPU?

the gpu's are overclocked on the gpu clock speed are at 1240mhz and the mem is at 3510 mhz. The cpu i only tried to do the cpu level up feature that came with the asus rog software but my pc crashes and tells me that the overclock failed so i put it back to stock i havent tried to maually overclock it yet tho.

You sir need better raddage on the front rad. That fan isn't doing much at all. Your loop is set good, decent CPU mount but you need more cooling. Your at 120x2= xx sq mm of cooling and the front rad. Most of us with an overclocked 680 and a pretty hot CPU (TDP) at stock would run a bit more rad.

Tell us about your fans. And did you dump the crap ASUS software for temps and use what I SUGGESTED you use? If not redo it and use what I suggested before replying please.
OP
S

im using the Phobya 180mm x 25mm G-Silent 18 LED Fan, and three Noiseblocker NB-BlackSilentFan XL2, i have access to some Cooljag Everflow 120mm x 25mm 9-Blade PWM Fans would those be better than the noiseblockers.. what 180mm fan would you recomend to replace the phobya one?
i used the realtemp gt

No idea, Google etc. We have some stickies you should read, and there is a ton on the internet.
M

http://www.newegg.com/Product/Product.aspx?Item=N82E16835220035
something like that fan would work out better, much higher air flow 150 cfm, with a little more noise.... but not to bad at only 36dba, and that should help out a little.

150 CFM, has it been reviewed? That's Marketing Magic there. And it's ability for static pressure?

Independent reviews matter, not a Marketer writer that needs to make a boat payment.
OP
S

thanks for the tips, i looked up the specs on the fan i have and its rated at 54cfm at 700rpm, pretty weak. Im going to take a trip down to frys tomorrow and see what they
got also the radiator takes up to 225mm fan, but im guessing bigger not always better also
selection might be scarce at that size

Frys ain't got much for sure in quality fans.
You must log in or register to reply here.

Mar 30, 2022
tomdean
T
H
The LEDs on the reservoir K-Quantum Kinetic FLT 80 are only green

FRONTPAGE CES 2022: EKWB Presents the Next Generation of Liquid Cooling