I just upgraded the heat sink 2 days ago.
The graphics cards were originally 2x EVGA GTX 760 FTW editions, i upgraded them a couple of months ago.

First, when i OC'd my CPU, i done it in steps. I didn't want to just OC it to 4.6Ghz and find i fried my CPU lol.
So, i started off at 4.2Ghz, then went to 4.4Ghz after some testing at 4.2Ghz and saw it was stable enough to move on to 4.4.
Again, when i got to 4.4, i done some testing, and saw it was stable. Then i left the computer to go do something for about 5 minutes, came back, and saw the CPU was sitting at around 55 degrees Celsius while doing nothing.
Just to clarify, there was nothing running in background, cpu was barely using 1% of its cores, maybe 2% at times. No screensaver was on at the time. But yet, here is my pc idling away at a warm 55 degrees.
I know the temp is nothing to be concerned about in general, by that i mean if i was gaming or video editing or something that is taxing on the cpu then that temp would be classed as normal. But, i don't think it is normal for that temp at idle.
So, i spent a day doing a heap of reading about OC'ing and temps and configurations,etc, but couldn't find a definite answer to my problem.
The weird thing was, soon as i moved the mouse, the temp dropped back to normal, around 25 to 30 degrees.
When i noticed this, i let my pc sit for a bit at idle, not touching the mouse or anything, to see if it would do it again. Sure enough, about 1 minute later, the temp jumped up to about 40, then crept up to 55 from there.
This had my attention at this stage. But to be sure, i done exactly the same thing again, and the same thing happened again.
So, i tried to google as to why my pc would be doing this. I could not find an answer anywhere.
I started looking up OC'ing and temps and configurations again.
I saw, that some people were saying leave speed step turned on when OC'ing because you don't want to consume power when you dont need it, like at idle or browsing the web. While other people were saying to turn it off. Not sure why they said to turn it off, but they did. You guys might know?
I also saw some people were saying to change the LLC in the bios.
There were a couple of other things peple said, but, i thought ok, i will try something, but 1 thing at a time, so if something fails, i know what it was and i can easily revert back to what the setup was.
So, i was going to change the LLC first, but then i thought, no, i will change the Speed step first, purely because it seemed a bit more logical as it alters power and volts, or so it came across to me as anyway.
So, i disabled speed step, saved and restarted the pc. To my amazement, the cpu no longer creeps up to 55 at idle.
I left the pc sit for about an hour, without touching anything, and i sat there watching it just in case something went wrong, i could quickly shut the pc down. (Mind you, it was a very long and boring hour) . But, no more creep ups. Idling beautifully at a comfortable 25 to 30 degrees, even when browser is open, music playing, and a few other apps,etc.
So, after finding my solution to this issue, i then went ahead and OC'd further, to 4.6 Ghz. Which is still running at a comfortable 25 to 30 at idle with apps and browser,etc open. I do notice when first opening the browser and some apps, it tends to jump up a bit in temp, from anywhere from 35 to 55, but quickly comes back down again. So, im not too concerned by that.
When playing a game, i have tested using HWiNFO64 and RivaTuner Statistics Server so i can see cpu temps and usage while in game. The most i have seen my CPU at is about 71 degrees with i think it was 50% usage. Would i be right in saying those temps are ok when gaming? I ask because it seems people have varying opinion about what the CPU can handle. Some say 80 is max, some say 70 is max,(if it is 70 then im at that threshold already then and something is wrong), while others say 90 degrees. I have looked in the bios and i do see 105 in there somewhere , something to do with threshold or something. Maybe someone can shed some light on this for me?
Anyway, i wanted to share what i found in case someone ever has this issue with idle temp being over 50 after oc'ing their CPU. I hope it helps.
Last edited: Mar 31, 2017

The MAX temp for your CPU would be 100c but 80-90 is fine for stress testing.
Just curious how many monitoring softwares you have installed? Or AISuite. Having more thatn one monitor can interfere with the sensor causing odd readings and AISuite is notorious for doing weird shett.
OP

Thanks for that bit of info Johan. I haven't seen my CPU hit 80. The highest i think was 71 while in a game. I think i should be safe
As for monitoring software, i never thought of that lol. I was just basically following another thread somewhere in the universe of the internet to use HWiNFO64 and RivaTuner Statistics Server together, something about one needing the other or something along those lines to be able to see what the pc is doing while in game. I was looking up how to get cpu temps, usage, frame rates,etc,etc,etc up on the screen while in game.
I think i may have had AI suite II running at the same time, so i will have to re-run HWiNFO64 and RivaTuner Statistics Server again to see what happens without AI suite running. So, thanks for letting me know
I generally only have AI Suite running when i'm in a game, or if i have altered something and want to keep an eye on temps, which i have been doing pretty much all week.
I'm about to do a some more testing now, so i will update this post once i have done the above
If you like, you can check out a couple of benchmarks i done once i had it all setup. This benchmark was when i OC'd the CPU to 4.4Ghz https://www.youtube.com/watch?v=aaQqva_McVs
This one is when i OC'd the CPU to 4.6Ghz. The differences were minimal.https://www.youtube.com/watch?v=OaPh2Xc01Bg
Last edited: Mar 31, 2017
OP

Here's a couple of pics of my rig. The only things i would like to do to this case, is 1/ Paint the outside of it in a glossy black. 2/ A new 120 or 150mm fan under DVD/CD player. And 3/ Mod the front panel. Change it where the air comes in from at the bottom, because i think it is a bit restricted with the angled bit. They should have made it square or circular. But i would like also to make the front panel all flush and straight. It did have a door on it, but i took it off because i never shut it anyway. But who do i get to make a new front panel up for me is the big question. 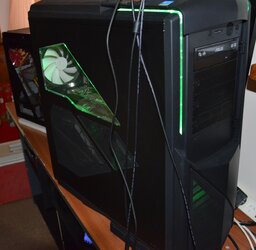 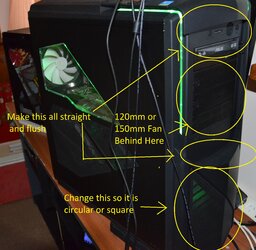 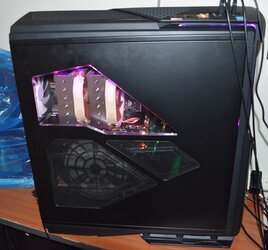 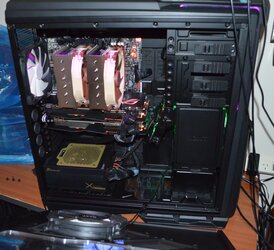 I dont know if many people were aware of this, i know i wasnt. But i been trying to troubleshoot frame rates in a couple of games since i got my 1080's.
I contacted Nvidia to see what they would say. Here is their replies :

I can see the main issue you are having is getting 60 FPS with games like Ghost Recon Wildlands, The Division, and GTA 5. All of these games are demanding games. For example with Ghost Recond Wildlands it sounds normal the FPS you are having. The game has some of the best graphic features to date just like the most recent Tomb Raider. I am running the game on a much faster CPU and with the settings set to HIGH not VERY HIGH OR ULTRA, HIGH I am able to get 80 to 100 fps. On HIGH my GPU GTX 1080 is pegged at 98, 99 percent. All 3 of these games use advanced graphical technology. GTA 5 is one of the first games to use CPU hyperthreading and is a very CPU intensive game. It looks like you are able to monitor the CPU and GPU usage. One of the reports here says the Division you are getting 80 fps and GPU is at 98 percent. This sounds normal. The Ghost recon Wildlands FPS listed here looks normal. If you can see the GPU is hitting max usage then that is exactly where the limitation is.

SLI is another story. Both the drivers from Nvidia and the developer of the game needs to optimize game for SLI. Sometimes this does not happen for weeks or months after the game is released. As more and more games start to use DirectX 12, SLI will become a thing of the past.

Overclocking your CPU when the GPU is the one that is pegged at 98, 99 percent will not help anything. With DirectX 12 SLI is not needed. DirectX 12 will use multiple GPU at the same time without the need for an SLI bridge. There are only a handful of games that have directx 12 support currently but the amount is growing and it will become the new standard.

Just thought i would share this, as i didnt know, so maybe others dont know as well

It is true that DX12 can utilize multiple gpus not in sli or crossfire but the games have to be coded for it to work and the gpu has to have the instruction set. It is not widespread at this time. Here is an example of what it can do when all those factors are present:

Thats pretty much what i was told. I didnt know this though til Nvidia told me. At this stage only a few games use this, but more will come.
You must log in or register to reply here.