FX 8370 Overheating. Help me find the cause please!

I have recently upgraded my computer to a FX 8370 and I'm having some issues as temps in load will average around 60-65 with peaks of 70-73.

It has the stock cooler altough I have already bought a Cooler Master Hyper EVO 212 which I'm planning to install ASAP.

However something happened today that made me question if it was just a temp problem: I played a game (not cpu demanding) for a couple of hours and according to Hardware Monior Pro cores were working at 1,4 mhz and the temp was around 25-30, which was right as I touched the case and it was cool.

However when I played it again a couple of hours later the cores started working out of the blue at full speed (4,3mhz) and the temp went up to 60-65 which is what it averages on more demanding games.

The mobo is an ASUS M5A78L-M_LX_V2 which is the one that I had with my previous CPU and according to the manufacturer it is compatible with the FX 8370.

However I'm unsure now if the problem is the stock cooler, the mobo or both.. I don't know if it's worth something but usually the VCORE peaks at 1.45 altough I can see no relation between it and the cores' temps

If anyone could give me any kind of advice I would appreciate it.

If the CPU is stock speed 4ghz/4.3ghz turbo your VCORE (voltage) is WAY too high, I'm assuming you have everything on auto on BIOS ? That would be what is causing your temp problems, although stock cooler isn't helping

Hate to be the bearer of bad news but this is the problem. That board is too underpowered for that CPU. Maybe with the better cooler you can run stock maybe. Does it have APM or HPC in the BIOS ? The board has a 3+1 phase design and no heatsinks. I would find something much better. 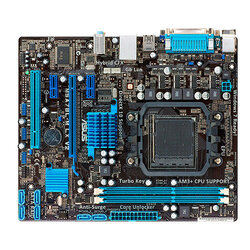 I agree 100%. I'd replace the motherboard with one that has at least a 6+2 power section if you're running stock and 8+2 or better if you want to overclock. The CM 212 will cool that fine for stock or a mild overclock. I would also stay away from MSI with AM3+ chips. They have a pretty bad reputation with that platform.
OP
K

@Kenrou @Johan45 @Blaylock thanks to all of you for the help!!

@Kenrou, yes the CPU is at stock speed , I didn't even think of OC with that mobo and temps tbh. However I'm running a programme the ASUS EPU engine in auto to save some energy when it's idle....however I don't know if that is somehow messing up the temps too as I have seen the cores go as fast as 4,5 ghz once. The VCORE is usually at 1.375 at load...1.45 is the maximum I have seen, altough I guess it's not good at all.

Could you guys recommend me a decent and not that expensive mobo? I'm from South America and here everything is x2 due to taxes....

To be honest I just wanted to save some cash by using the same mobo and buy a better GPU (which was what I did) and now I see that I'll end up spending even more that I had thought at first.....

That's usually the way it goes. Give mus a link to where you will shop and We'll see what we can do

Personally I wouldn't bother with the software. Just make sure cool n quiet is enabled and you'll save energy at idle.
OP
K

So for instance the Gigabyte GA-990FXA-UD5 which is 176 USD on Amazon is 370 USD here....If you ask me what my budget is .... I guess that I'm already over it so it doesn't matter , obviously the cheaper the better but I already tried to save money before and it went bad so I'll just listen to any suggestions

Hard to make heads or tails on that website are some of the components used? If you plan on running stock to a mild Oc these would the boards I would consider.
Asus M5A99X Evo or M5A99Fx Pro
Gigabyte Ga Ma 990Fxa UD3
OP
K

Thanks Johan I really appreciate it!!!! You took the time to give me a hand and that was really nice of you. I'll look to buy one of those.

Thanks Mandrake I'll take those into account too! The website is like amazon so you have all the products from all the sellers... however it doesn't matter i just wanted to have some suggestions , I linked it because Johan asked where I was buying it.
Last edited: Feb 9, 2016
M

I have a Gigabyte 970A-UD3p ... It's nothing special except the 8+2 VRM phases...The board is cheap because is not "special" with fancy lights and fancy sound and other things...Just a brute force VRM phase design that can sustain the FX8370 and overclocking.

Enjoy
You must log in or register to reply here.

May 15, 2022
PathTracer
P
Y
Squeezing all the performance out of this setup