Today's review confirms one more time why G.Skill is the most interesting RAM manufacturer. The reviewed DDR5-6800 memory kit starts a new generation that uses Hynix A-die IC and provides high performance and amazing overclocking potential. You can't go wrong with a memory kit like that.
Click to expand...

These things are overclocking beasts. I just read this one and the Tech Power Up review. You both got nice high OC's out of the kits.
W

I could say something about the TPU review, but I don't want to comment on it here. Those who are into DDR5 OC probably know what I mean. 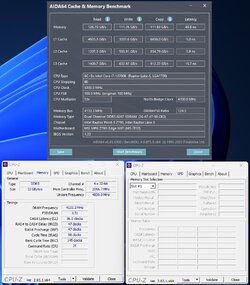 For some reason, on this BIOS SPD reading doesn't work in CPU-Z or AIDA64.

It could be a bit better, but probably not on this motherboard. It's not fully tuned, but mainly because the motherboard has some weird limits on some timings and some settings cause it not to boot at all (the same at lower frequencies). Also, some ratios don't work. It's expected, but MSI could lock not working ratios as ASUS does. I mentioned it in another thread, but 8400 and 8600 are not even trying to train. 8533 is trying but fails. At least this new BIOS adds one more ratio, so it's still good Results are similar at 8000 CL34 as at a lower clock can set tighter timings.
Either way, the G.Skill 6800MT/s kit is excellent, and with prices going down, it's for sure a great option for all overclockers and gamers

Looks like Earthdog needs to use his fancy contacts to procure you a motherboard for memory testing.

Voodoo Rufus said:
Looks like Earthdog needs to use his fancy contacts to procure you a motherboard for memory testing.

He tries, but motherboard vendors don't really send much this generation. The same story for all, even the largest websites. All offer mainly mid-shelf models. On the other hand, there are maybe 1-2 better motherboards for RAM OC than the MSI I used, so the choice is very limited.
You must log in or register to reply here.