i will try keep this as short as possible.

iv'e had nothing but problems with this board

first off i had overvolting/overheating problems, fans dont work as they should, temps don't show properly or freeze on a set temperature. as well as a few other little glitches with their crappy software.
i'm pretty sure i fried my original 6700k i had in it too. that is going back for RMA when i get the time.

drained all my system and pulled it apart "had to replace mobo and CPU while my other was in RMA" so took all that out of the case and put the Gigabyte Z170x mobo back in, which took a few hrs...
in the time my Gigabyte was getting fixed i had an Asus hero and new 6700k CPU running "it ran sweet"

fired up the gigabyte Z170x and installed windows and their drivers etc etc.
nothing but problems with the fans again. the SIV software is an absolute piece of crap. this software is all over the place. calibrate the fans all good. then i set them to the params i want. ok.
then for no reason at all the fans start going haywire. play a game or run a program. the fans go full bore, stop the game or program "IE Photo Shop" and the fan have set to full bore.
try reset the fans and they reset to some stupid setting. so try re-calibrate again and they won't re-calibrate to the right levels.
so i uninstall all gigabyte software re-install again and back to square one.
every time i reboot my system i also loose all the settings i have set the fans too.

now because from what iv'e read, that gigabyte wont release the source code for their software. no other software that i know of will monitor or control this mobo "properly"

tried using their e-support, but they are just telling me to try things i have tried multiple times.

yes i also realize that i can use a fan controller to fix the fan problems, but should i have to on such an expensive board "imo no i shouldn't have to"
also the temps monitoring of this mobo/software just doesn't work as it should.
"fans are 3 x 120mm PWM Noctura 1 x 140mm PWM noctura and 2 x 300m NZXT LED"

i had a popup friday night telling me to update app center so thought beauty, they might have fixed this thing. installed it and it didn't change anything for me.
then noticed there was an new inf update via live update and thought again beauty maybe that with fix things, so started to install that.
BSOD "service exception error" try again BSOD "irql not less or equal" "lol what a joke"

contacted the store i got it from and they are saying they will have to return it to gigabyte for them to look at, so i said i will have to wait another 6-8 weeks and was told yes maybe.
this will mean they will have had the mobo longer than i actually have. "what a joke this is turning out to be"

i now just want either my money back or i want it replaced with another high end board that actually works how it should.

firstly i have posted this info for others considering buying this mobo.

P.S. i advertised this mobo on a local site for sale at a loss just to try move it on, stating reason for sale is i don't like it.
had one call from a bloke saying he didn't want to buy it but tell me about all the problems he has with the same board lol...
Last edited: Mar 19, 2016
OP
K

P.S.
just a cpl of screens to show what i mean : 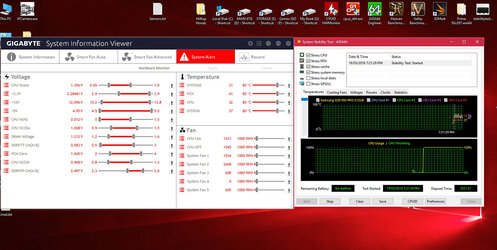 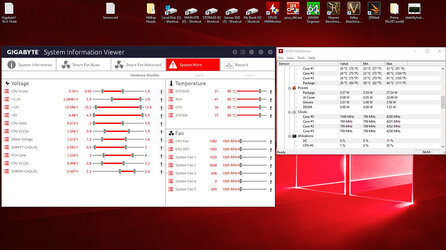 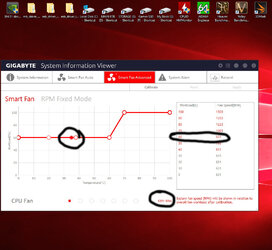 Instead of using the software have you tried just setting the controls in Bios?
OP
K

i haven't tried just the bios settings, but the whole point of using their software was to monitor and control/record fans and temps.
i could also just control the fans with a fan controller, which iv'e had on order and should receive tomorrow.
but my whole point is i shouldn't have to, i bought this high end board thinking it would be able to handle everything it advertises, but it far from does.
iv'e had nothing but problems with their software, so much so that as mentioned above i think the board also fried my other 6700k CPU ?
i'm not even overclocking, just running everything at stock speeds as i have no confidence in this board.
W

I would contact Gigabyte with your problems they will test it out for you, they did it for me. http://www.gigabyte.us/support-downloads/technical-support.aspx

iv'e tried their e-support twice Wingman, they are just telling me to do things iv'e tried multiple times, like format and re-installs, install software in a particular order and stupid things like have you tried other fans "duh" of course i have, and mate if this thing can't handle noctura PWM fans "what the"
i try to install their new INF update, i get BSOD, try to install their Intel Management Engine Interface in their mb download section and it just crashes and refuses to install.
as explained above if i send it back they will have it for 6-8 weeks again, if that happens they will of actually had the board longer than i have since i bought the piece of crap.
CPU was over volting and over heating, a while back i posted about this a while ago, then i tried to overclock it in the replacement board i was using and it just died and wouldn't boot, replaced it with another 6700k and i was up and running again.

so what are you using to monitor your temps etc with your z170X Gaming G1 ???
You must log in or register to reply here.

E
New build, weird issue. Would appreciate some help. Thanks!
2