I didn't pick my title, the mods did, but I'm sticking with that theme and I'm excited to try out the new cooler. Been selling quite a bit of stuff in the classifieds to finance new toys, so now I'm ready to play.

I have some pics and initial impressions...

It's a shame this thing will be buried under insulation and frost, it is pretty. It's external finish is nicer in person than I expected from any pics I've seen. 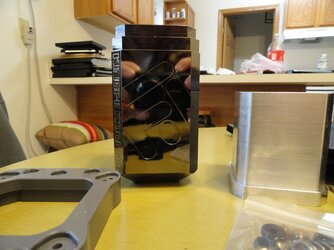 The internal finish isn't so nice. Machining is fine, but there's a small amount of corrosion/tarnish going on in there making it look slightly diseased. Hardly anything, and likely easily fixed, but not bad enough to inspire me to do anything about it before trying it out. The base is also thick from top to bottom, the top of the internal holes is about a centimeter higher than the base of the F1 Gemini. I am eyeballing it here, and have terrible estimates of size/proportion - let me be the first to say these are horribly inaccurate inferences from just looking at the thing. 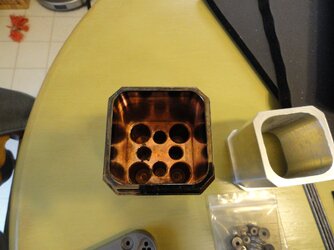 No reason to worry about bent mounting rods - 2 out of 4 came pre-bent, so no need to worry about screwing them up really! Not a big deal, but the package cost ~$350 for parts and shipping from Taiwan - at the price, I WILL nitpick. I would guess the rods shipped in good condition, but from the packaging pics you can see things were bouncing around in there and I don't know what the pot specs are - but for those who haven't handled one before, these things are surprisingly heavy. I would say its weight is comparable to a kids bowling ball - maybe not as I don't know what those weigh either, but thats what it brings to my mind. It is heavy. 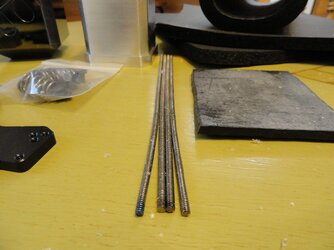 It was dropped off for shipping on Monday, I received it today, Friday. If it had been mounted as a warhead on an ICBM in Taiwan and launched in my direction, it may have gotten here sooner but not by much. Packaging gets a C-, everything arrived fine other than those rods, but if everything were somehow secured rather than left bouncing around within an oversized box I would grade the packaging higher. Opposed to my inaccurate estimates on size and weight, a C- is absolutely exactly the accurate grade for this packaging - I may not be great at size and weight, but I have gotten my fair share of C-'s in my day, and I know one when I see one. 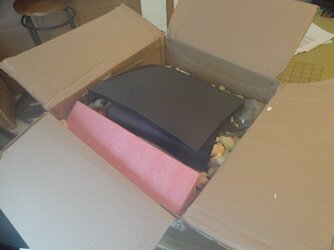 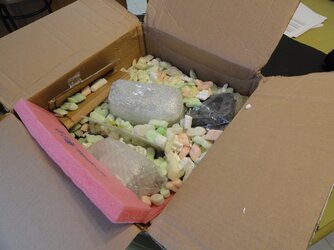 This is everything that came with it. The aluminum extension is an addon, which costs extra. Everything else comes standard with the container. Except the Roomba, that was sold separately. 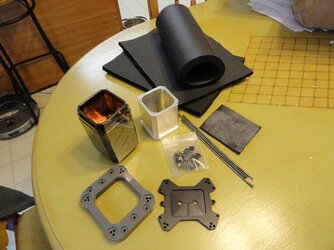 And here it is with the extension dropped on top, for an idea of how tall it is. The extension disrupts the dapper look, however in use its all frosted over and under insulation so you'll likely never see a pic of any of this again when it isn't hidden under a quarter inch of ice. 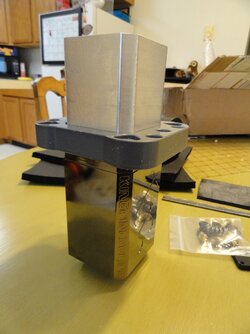 I forgot to add: If you are shipping something like this, secure the rods together in a bundle. A bit of tape wrapped around the middle of the bundle might do the trick. With 4 of them in a pack they would be less likely to be damaged.

It's almost funny really, for simple rods to be such a problematic component and for that to be a recurring theme.

They are a problem on my F1 Gemini also - the rods that came with that are all different lengths. Not a big deal, but if you want to turn it upside down to let everything melt and drip off so you can bench the next day without tearing down - uneven rods are an annoyance. Mine are very uneven, but 3 of the rods are close enough that it balances precariously while upside down.

Le sigh. I'm a bit under-impressed with the internal changes, really. I mean, I don't have dimension or anything, but it looks nearly identical to the OG F1EE. I don't have a problem with that, as the glory of the OG is the very stable temp swings. It would have been a little nice to see a tad more surface area on the inside to help with the pull down time. I never stop watched my pot, but sitting in bios (so minimal heat output), the pot takes about 5-10 minutes (and MULTIPLE thermoses of LN2) to pull to -196.x on my Fluke. We'll see how it is though.

Location
Lake of the Ozarks, Mo

Hopefully this means mine and the teams stuff will be here soon too!
OP

I will post back on this against the Gemini slow base. On the Gemini I could hit -196 in under 2 liters, and 8ghz within 3 liters.

That's on a chip I had already tested of course, so I am just talking temps and time until overclocking, not sk1ll$. I have pulled the Gemini down that way numerous times, so it should be easy to compare impressions to the new f1ee.

fwiw, I think it is exactly the same as the original other than looks. granted, i dont recall looking at an f1ee in person since I last borrowed the team pot at the beginning of this year.

man that is weird to think about. less than a year ago I was unemployed hanging in my basement running ln2, using a borrowed pot and half the hardware i was running i had gotten on the cheap from team members, the other half was bought for me as a gift from a team member. time flies!

Wow, that is definitely the nicest pot I have ever seen!

Nice, which CPU will bend under that beast 1st?

yeah it was taking me white a while to draw down my f1ee the otherday on that 955, i am not sure how the mass compares to the gemini's but it was around 4ish i think if i wanted to try to pull it down all the way. probably a little more, but it certainly makes maintaining temperatures in the mid -50 to -120 easy.
OP

The Gemini has a copper slug for a base, same size but slightly shorter than the internal base height of the f1ee. the walls are all aluminum, so it feels a LOT lighter without the full copper sidewalls.

I feel obligated to also take another whack at cpuz on the fx-8120. if I can get another 50mhz or so, I would be where I need to be in order to take 3rd in the world on it, and that is a lot more points for the team.

plus if I sell that fx-8120, I want to make damn sure it doesn't have anything left for a future owner to beat me with my own chip. that 4th place run was only 4 liters - I could probably spend a few more hours and get a squeak more out of it, or I would at least feel certain that it is maxed.

Very nice Matt. Could you do me a favor. If you still have your Gemini could you let me know how the extension fits. I have one on the way for mine.
OP

Same as it does on the F1EE, dimensions are identical. Fits good.

You will be happy with the extension if you've never had one before - I've missed it since using the team pot.

That's want I wanted to hear. Wasn't sure if the dimensions changed or not.
D

I've always thought matte looked good enough, it's going to look terrible after it's been wrapped in sticky insulation and froze over a few times anyway.

Matt you need to show us what it looks like after you've used it a few times.
OP

CPU pot insulation usually isn't sticky, so that isn't an issue - sticky insulation is only used on GPUs. The only thing sticky on a CPU pot is typically tape to hold the temp probe in there, but using painters tape doesn't leave any residue really - I use that to wrap my GPU pot before using armaflex tape, because the armaflex leaves a mess, so the painters tape can be peeled off to get the armaflex mess off.

This pot will get a mess from fingerprints though. Already is.

Sooooo jelly.
You must log in or register to reply here.

Any love for legacy cases? What to do with them?
2 3

A more sophisticated version of the Kill-A-Watt?

Looking to ReGas my Single Stage