I have a Gigabyte GTX 970 G1 Gaming. I have had it for about 5 months now, I got it for Christmas. We bought it off ebay, it had been used for about 4 months before that, in SLI with another.
My problem is that it is under performing. I ran benchmarks using PerformanceTest 8.0 which I use for a lot of things, and it's showing a rating of 6337, when 970's in general should get about 8669. This is the first time I've used this software on my pc.

My computer specs can be found at this link: http://pcpartpicker.com/p/Qd26cf

Now, I have a question. Could it just be because I still have an APU that it's under performing? I am going to have about $300 or so to spend on hardware, I was thinking about just buying a second 970 to put in SLI with the one I currently have, however the APU would be a huge bottleneck in my build. I might have to save up more money if I finally need to replace that APU with something else. I'm guessing that I should probably upgrade my CPU/MB first, but I hope the problem isn't my graphics card. I have tried testing it on a completely black version of Win10, still around the same score. I hope someone can help, I can also use other benchmark software if it's free for anyone of you guys to help me. Thanks so much!

Passmark is a garbage benchmark.
Want to test your GPU, run Heaven and compare to other 970's.
https://unigine.com/products/benchmarks/heaven/
OP

Ok, I've downloaded that and did the benchmarks. For some reason, the nVidia FPS overlay was much a much higher framerate then what I saw, and what the software recorded.

Here are my settings:

And here is what I got: 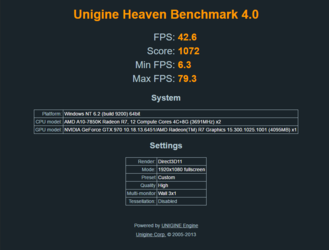 People are reporting they got upwards of 1500, and one even said they got 2000+ without overclock. Now I've never overclocked mine, but I do have a decent overclock on my CPU, but I don't think that would negatively affect my GPU score. I still don't know the problem. Any suggestions?

Just at first glance, and without digging into it very far, I'd say your CPU may be holding you back a bit. Especially on anything that's CPU intensive at all.

The 3 x monitors isn't helping either.
Click to expand...

I would try it with one monitor before pulling it out. Unless your friend is running three monitors with the same resolution, the comparison won't give you an accurate read on the performance.

Looks like one monitor did it for Heaven. I'm getting a score of 2600 now lol. But if I'm going to upgrade, should I go for a new CPU/MB or just another 970?

oh! and allways run the preset benchmark when posting in the forum, that way we all know what and how it is being run.

The processor may be holding you back, but one 970 is not enough to drive 3x1080 monitors in surround.

As stated above, 2 970s will run that much resolution without issues (although, you will "stutter" in Heaven for the dark scene that has the torches for whatever reason). I used to run this setup.

make things simple, save for a 980ti.

That's entirely up to you.

In general, 1 faster card is better than 2 slower cards (for gaming purposes).

If you are going to SLI the cards, make sure that they will work together. It is easiest if the cards are from the same manufacturer, and the same series. For example, EVGA "blower style" 970 cards do not SLI well with the EVGA "ACX style" cards.
OP

Okay, thanks so much for all you guys' support. You guys are awesome

I prefer to go with the exact same part number.
there is more than one evga ftw+ card, they will sli but you give up some performance.
W

I would go for EVGA GTX 980Ti they have great support.
You must log in or register to reply here.