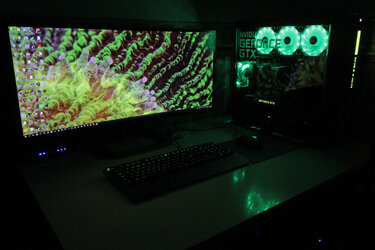 This wasn't a totally new build, as I rehoused my existing main system into this case. I need to update my sig some time. Out went the Corsair Air 540, which wasn't the problem, but the watercooling I put in after. It really kept the temps down, but I couldn't reduce the pump vibration enough, and I also had a residue problem in the loop needing a deep clean. Neither of these jobs were likely to be quick, so I moved all the stuff over to an In Win 303 NVIDIA edition. I debated going for the standard one or not, and the nvidia one won purely as I like green front panel more than blue of the standard.

Since I was going waterless, CPU cooling is provided by a Noctua D14 with stock fans for the moment. This just fits, and when tuned to give minimal system fan noise, it was only 4C hotter under load than the custom loop I had before. If I turn up the fans, it is more like 1C hotter.

The 980Ti reverted back to the stock blower. I know this will be a problem going forwards, as it hits thermal throttling even running Heaven. I'm debating swapping it with another GPU from another system temporarily. 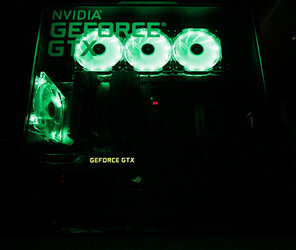 The fan at the rear is the one that comes with the case. The upper trio are Corsair HD120s. It is a plus all the fans are the same shade of green, but the down side is that isn't the same shade as the GEFORCE GTX illumination, which is a lighter shade, and does match the front panel as shown below. I don't think there is any easy fix for this. 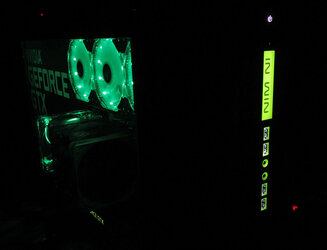 The rehousing took much longer than expected, about 8 hours for the physical side. Draining and disassembling the old water loop, and refitting the GPU cooler took a fair chunk of time. The build seemed simple, but it proved otherwise. Everything blocked everything else, so I had to do a little backtracking now and then. I'm left with quite a long to do list to give it a final polish.

The HD mounts leave the connectors low to the mounting surface. The SATA cables that come with my Corsair HX750i PSU have the cable feeding at 90 degrees to the plug, and there simply isn't enough room. I had to resort to using some other molex to SATA power adapter cables to make them fit. Same problem with the SATA data cables, I need straight to straight ones. I'm going to have to look at what after-market cables are available, maybe even go for a custom set. This may contribute to drives sometimes not appearing on some boots which is somewhat concerning.

Not letting me rest, I had a new problem happen after the case transplant. When shutting down Windows 10, the monitor would go to sleep as expected, and after a short pause I'd expect it to power off. It never happened. I left it for 10 minutes or more, far longer than it needed, and nothing. I had to pull the plug. I searched around and tried disabling fast boot or whatever it was called, but that didn't help. I've always wanted to turn that off anyway, as my systems boot fast enough normally without the funnies introduced by not doing a proper shutdown. It was then by chance I saw my system report it had 8GB of ram. Er... no, I have 16GB. I powered off and reseated the ram, after removing the fan which was in the way. Back to 16GB. I wonder if that contributed to the shutdown problem earlier... time will tell.


After some thought I'm debating what to do next. Do I add more green, or not. I do want to replace the SATA cables with a new matching set. I need to address the power cables also.
Option 1: get a casemod green cable set. This will sort everything out, and I just need to add separate green SATA data cables still. A set would cost almost as much as the PSU did though, so big spending.
Option 2: get the black SATA data cables, plus black SATA power adapters. Maybe get black spiral wrap for the 24-pin cable, but dunno if that will help cosmetics at all.

The big question is would green cables enhance the build or not. The smoked glass makes back cables almost invisible as long as I don't add any more lighting. Even the Noctua brown fans don't look bad with the green lighting.
You must log in or register to reply here.

M
EATX boards + Thermaltake Level 20 GT: how would you route the cables?