Guide to the 7v Fan Mod

Overclockers is supported by our readers. When you click a link to make a purchase, we may earn a commission. Learn More.
F

Hi. I know this is not about the fans, but its related to the subject. Im working with a computer power supply, and i need to power up my Electronic Speed Controller used for controllig a DC Brushless Motor. That Speed controller works from 2-3 cells LiPo. But it has a PWM input from a microcontroller.

My question is: If i use the 7V mod from my computer power supply, how will this affect my speed controller circuit?? Because the ground from the controller will be different from the "ground" (+5V) of the +7V. Im gonna work with high currents so i dont want to damage anything. \

Thanks a lot
J

Does this mean that the other wires, not the power wires used for power/ground are not used?
E

Give me a break Senior

JustJoe91010 said:
Does this mean that the other wires, not the power wires used for power/ground are not used?
Click to expand...

Be aware of where the voltage/current is going with the 7v mod.
It is not going into the PSU, it is going to ground via the devices plugged into the 5v line and lightening the load on the PSU's 5v output.
It is literally impossible for an output from a modern switching PSU to act as a ground path, the fact that the 7v mod functions means that the ground path is via another route, and the only other route are the devices plugged into the 5v line.

If you have a 10 amp load wired per the 7v mod and only have 5 amps of stuff plugged into the 5v line you will likely end up with rather more voltage on the 5v line than you want.
I mention this because last time I checked modern RC car motors (what come to mind when ESCs and brushless DC motors are mentioned) draw a lot of juice.

Added to the Big New Fan Sticky and unstuck.
P

Nice mod...can i connect the CD drive with molex connector by using 12V and 5V adapter separately ? i am not able to figure out how to give ground connection....can anyone please assist...

It 's without the motherboard ...


cetoole said:
Many people, while desiring high performance out of their computers, decide that their computer is too loud, so the easiest way to combat this problem is to slow down the fans, which are the major noisemaker in the average computer. To slow a fan down, one must reduce the voltage powering it. The fans that most of us use in our computers are 12vdc fans, but most will run fine at lower voltages, with some going all the way down to 4v without issue. The cheapest and easiest way to slow down a fan is to simply power the fan off a different rail than normal.

Now, most people know that the average computer has a +/-12, +/-5, and 3.3v rail, and it is simple to power fans off of these rails by changing the power lead for the fan from the normal 12v to the 5v rail, as most fans won't start with 3.3v. While these rails are common knowledge, many people don't know that there are also several "virtual rails", the 8.7v, 7v, and 17v, as well as the 24v and 15.3v rails. These rails are not true voltage rails, they are accessed by using one of the real voltage rails instead of the common ground as a ground for that rail, so the 12v=12vrail+ground, 5v=5vrail+ground, and 3.3v=3.3vrail+ground. Now, if you switch the ground to one of the lesser voltage rails, such as the 12vrail+5vrail, you end up providing 7v, which is the popular 7v fan mod. This is by far the most common, because the 4-pin molex connectors used to power devices such as hard disk drives and DVD ROM drives has a 5v line, 2 grounds, and a 12v line. To get 8.7v, it is necessary to bring a wire from the 20 pin ATX connector on the mobo, which is much less convenient. The voltages above 12v simply use the negative rails, but again, these are only found on the 20 pin ATX connector, and are not really very safe to use for this purpose, as the negative rails are very weak, and don't have enough load to absorb the power sent back up the rail.

This is also an issue with the 7v and 8.7v mods, but much less so because of the load of the whole computer that is much greater than the load of the fans, but before doing this mod, always check. It is not a good idea to try this mod when starting a PSU with the wire trick, because unless you are running other things with it, there is no load, and you can cause physical damage to your hardware. Some of the lower quality PSUs also die with this mod, so it is only advisable to do it with a decent PSU. 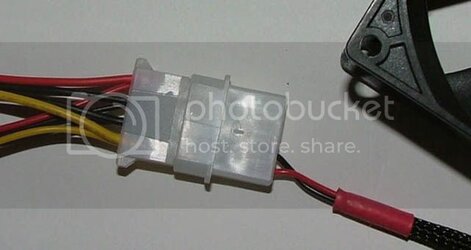 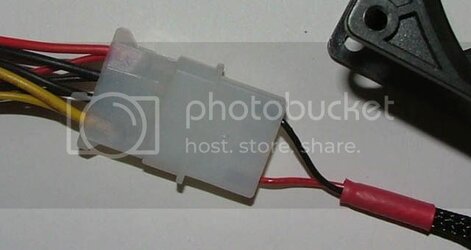 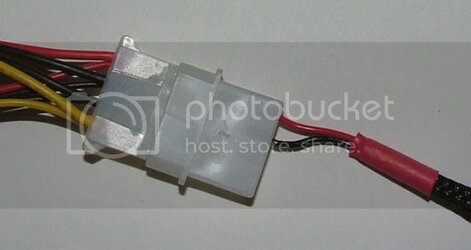 Very simple mod anyone can do. Thanks

I have one minor issue with the write-up


cetoole said:
so the 12v=12vrail+ground, 5v=5vrail+ground, and 3.3v=3.3vrail+ground. Now, if you switch the ground to one of the lesser voltage rails, such as the 12vrail+5vrail, you end up providing 7v, which is the popular 7v fan mod.
Click to expand...

This is technically incorrect.

Current represents the flow of charges through a closed loop. Voltage potential is the difference in the amount charge present on two conductors. I really hate the term "ground" because it is very misleading and leads to a lot of confusion. The "rails" you mentioned are just conductors that are part of the power distribution network in the PSU, they are designed to provide a constant voltage potential depending on the load applied and the frequency range. There is nothing "virtual" about connecting between the rails to achieve a different voltage potential.

Thankyou so much.. simplest guide i found on internet, and working too
You must log in or register to reply here.