I'm hoping to take advantage of a better graphics card for playing games from the 2014 to 2016 era (preference for first person shooters). Current Video card is a GeForce 740 GT.

I have a $200 range in terms of spending money. What do you guys recommend here? Any/all advice is appreciated.

2x R9 290 would be right at the top of that list for me. and should be at that price point on ebay.

Though I like the horsepower of 2x 290s.. that board doesn't Crossfire, he doesn't have the PSU for it, heat mitigation of 2 225W cards, and the PITA factor of multi GPU.

In doing a little research on the matter it appears as though PCIE 3.0 is backwards compatible with PCIE 2.0? And no performance degradation or bottlenecks?

ED- Thanks for the link. That RX580 will be on my short list of potential video card upgrades. Also need to get an 8 pin power adapter to feed the beast! lol

Baylock - As ED mentioned I have a requirement to stay within PSU specs and need to avoid the extra heat.

I didn't realize your MB wasn't crossfire compatible either.

As far as pcie 2 vs 3 they are completely interchangeable. In fact there really isn't any noticeable gains to pcie 3 as the extra bandwidth is rarely, if ever, utilized.
Last edited: Apr 16, 2019
OP

Thanks Guys! I just pulled the trigger on an MSI RX580 Gaming X 8GB... $166 shipped (via eBay). I will document the install and post some pics when it arrives. 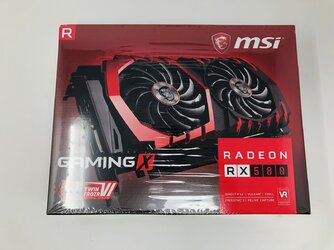 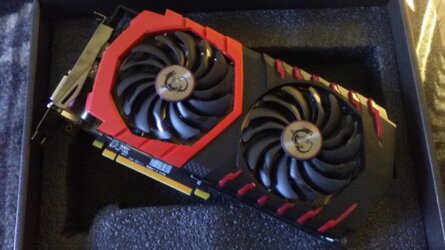 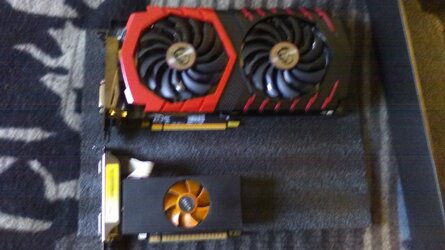 After this upgrade I noticed a much heavier workload for my CPU. So to help keep temps under control, I've upgraded from the Hyper 212 to the Fractal designs S36 360mm liquid cooling kit.
Very impressed with the video card thus far, seeing FPS in the 90-130 range during gaming.

Congrats! I like the baby nvidia in the second photo she will grow up to be a fine RTX card in the future!

storm-chaser said:
After this upgrade I noticed a much heavier workload for my CPU. So to help keep temps under control, I've upgraded from the Hyper 212 to the Fractal designs S36 360mm liquid cooling kit.
Very impressed with the video card thus far, seeing FPS in the 90-130 range during gaming.
Click to expand...

Well, having a CPU bottleneck is much easier to take, because it's like terminal condition, nothing you can do about it, lest you build a whole new rig.
Otoh, if you have lagging GPU, it's harder to come to terms with it.
W

RX580 is a fine GPU. What is your GPU utilization while gaming?
OP

So far so good with the new GPU guys. Phenomenal performance at a bargain price! Definitely noticed the better GPU puts more load on the CPU and the Hyper 212 just wasn't up for the task!

Running this new video card has required some substantial changes to be made to my cooling system.
-Had to swap out the Hyper 212 for the Fractal Designs 360mm radiator due to increased load on CPU
-Now have a 120mm fan flowing cool air over the VRM, RAM and chipset areas of the motherboard
-I can no longer run with the side on the case, it just bakes everything like a sauna if I keep it on
-All games have been stable thus far: BF3, BF4, BF1, Wolfenstein, Advanced Warfare

Here is a little snip after an hour of gaming, running Battlefield 4 on ULTRA settings (80-90FPS): 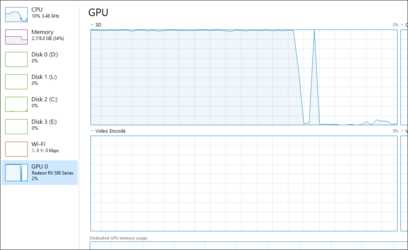 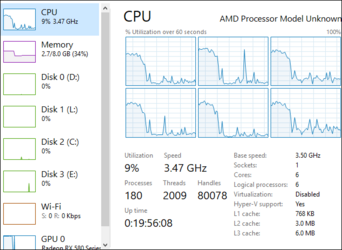 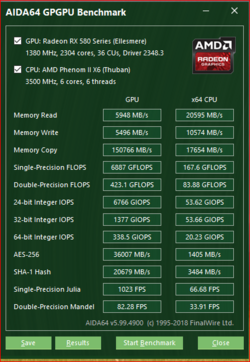 And temps after playing Battlefield 4 for about an hour: 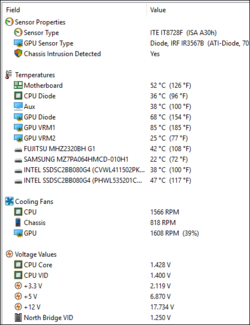 That is great 100% GPU utilization. No CPU bottleneck.

Question though, because there is 100% GPU utilization means there cant be a cpu bottleneck?

How's the FPS ? curious to see how the Phenom handles the newer games.
OP

All games on ultra settings:

Yes, EarthDog, I'm running 1080P. I think FPS would increase with a newer CPU. Reason I say that is take a look at the AIDA64 GPU benchmark... you can see my memory read and writes are way off from what they should be... this is the phenom II/PCI 2.0 bottleneck. So yes, with a better CPU and better motherboard this GPU would perform better, IMO. 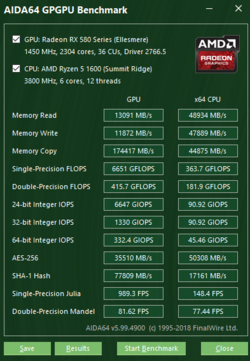 I have to make an edit to the FPS. It seems with COD MW3 I'm only getting 38-40FPS. Interesting thing is the video card/PSU/CPU doesn't even spool up even though the game is set to the highest settings.

So anyone notice the same issue with COD MW3??

Could it be fully loading a single core and not utilizing the rest?
OP

Zerileous said:
Could it be fully loading a single core and not utilizing the rest?
Click to expand...

Interesting thought. But I think I'm running into some pre-defined "cap" because I don't have this problem with MW2. I easily see spikes to over 200FPS in that game.

Here is an interesting read on GPU Memory Bandwidth (I know, its sac religious to post links from another OC forum, but this deserves a link up)

Sounds like the same theory as the iPhone, the more memory you have USED the smoother the system runs, why you should never install a memory cleaner. There are other games that i know do the same, CoD Advanced/Infinite Warfare for example completely filled the buffer of my 980ti 6gb/1060 6gb. Didn't know Shadows of Mordor did it as well, graphics don't look nearly as good even with the HD pack ?
You must log in or register to reply here.

9
Help me with my i7 Gaming Rig Build