Overclockers is supported by our readers. When you click a link to make a purchase, we may earn a commission. Learn More.
L

I want to upgrade my current GPUs with 1080 Ti SLI. I game alot in 3D and plan to upgrade to VR later.

I have a Silverstone FT02 case with 90° rotated Motherboard. The airflow is from bottom to top!!
Choosing the right GPUs is a bit harder (I asked MSI if the heatpipes on their 1080 Ti models use liquid or powder inside, because of the gravity. Pretty sure they use powder though).

Although no reviews for the Armor OC are out, I think they will run a bit hotter and louder. I will have to wait for tests.

I would go with the Gaming X BUT:

1. They are 2,5 slots high instead of 2,0 of the armor
2. The heatsink fins are horizonally aligned isntead of vertically as on the Armor OC

My MB has only 2 slots between the 2 PCIe slots for SLI and the vertical heatsink fins would be better because they are aligned with the airflow.

Do any of you guys have experience with 90° rotated builds regarding these points?
Will 0,5 slots breathing space be enough?
Would it help to let the card in the back be the slave card in SLI, so that the lesser breathing space doesn't matter too much?
Do you think the orientation of the heatsink fins are important or not relevant?

With these points in mind, do you think the Armor OC will run cooler than the Gaming X even though the Gaming X most likely has better cooling?

Thanks for any kind of insights!!!

No experience with 90° but I have had 3 slot 580's in SLI and it was a nightmare trying to keep the bottom one cool. I'd go with as much space between the two as possible

Never heard of powder inside the pipes... seems to defeat their purpose.

Im running 1440p in 3D.
Its more a point of future proofing. I want to be able to play Star Citizen with every setting maxed in VR. I don't want to upgrade the GPUs any further, I want to get a good 4~ years out of this setup.
I was struggling with choosing SLI, but found out that it scales much better with 3D, although every game is different there, same with SLI without 3D. Overall it scales better though and should translate directly to VR scaling.

I didn't really find alot of info regarding the internal heatpipe architecture.
Some say that GPU manufacturers even put in metal spirals in the heatpipes to help with gravity.
Really no idea though, I hope MSI will give me some answers.

EDIT: I found a nice picture from a heatsink manufacturer. These are different kind of heatsink designs (interior part) and how they are affected by gravity (lower resistance is better) 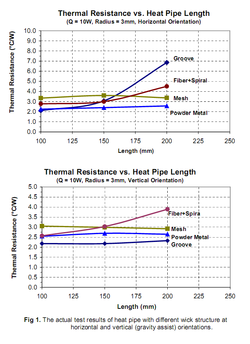 So apparently, groove and metal powder are best, mesh is still ok, fibre + spiral are worst!

EDIT2: The picture descripion says "gravity assisted" so I assume that means the heat source is at the bottom.
Normally, on most GPUs in a 90° rotated scenario the heatsource (GPU) is located at the top-middle part and therefore the heatpipes have to work against gravity for the most part.

CONCLUSION: After reading another PDF: Groove wick works very well if assisted by gravity but also very poorly against gravity. Sintered metal powder wick works best against gravity and well in other cases. Sintered metal powder wick is commonly used for heatpipes in electronics due to size restrictions and alot of bends.
From my experience and from what I've gathered so far: just look for the general orientation of the heapipes. If they run horizontally you will likely be perfectly fine. If they run vertically you will get hotter temps.

Here are two examples of best/worst case:
(the "right" side in the pictures is the side with the connectors which would be the "up" side in a 90° rotated motherboard) 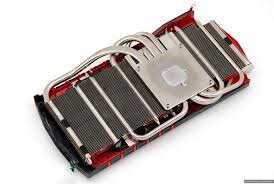 Ehh, that's not the liquid inside, that's the inner walls..and how they are 'cut'.

To be quite honest, you are really looking way too deep into this purchase if you are concerned about the pipes... Temps don't rise that much with a different orientation.
Last edited: Apr 4, 2017
OP
L

EarthDog said:
Ehh, that's not the liquid inside, that's the inner walls..and how they are 'cut'.

To be quite honest, you are really looking way too deep into this purchase if
Click to expand...

yeah, I figured as much after reading up on that topic.

But for breathing space and heatsink design... those are important factors and depending on the impact may warrant buying the Armor over the Gaming or any similiar cards.
You must log in or register to reply here.