it began when i was playing ,and i noticed that i have accidently set my gpu memory clock to +221 (Mem was running at 3222Mhz )in msi afterburner and i was getting stutters (still at 60 fps )..so i put it back to "default" and its still there... in ALL games . i tried to reeinstall nvidia drivers and it didnt worked ,tried to restore to a save point , but it still there anyway ..note that the gpu temp didnt go upper than 70 C with 50% fans ..i dont know what to do .. i have a gtx 760sc 2gb gddr5

One place to look is to see what other programs you have running. You may have an issue where multiple programs are fighting for your system resources.

Also, make sure that you didn't get too aggressive with your graphics settings in your game(s). 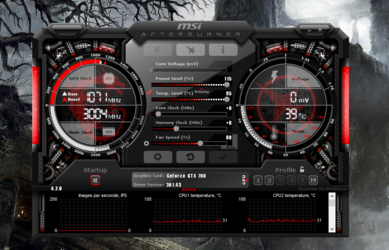 What screen resolution are you playing at?

the stutters i have gotten have always been caused by having my graphics settings a bit to high for my res or my game having to load something from a slow hdd.
are you installed on an hdd or ssd?

have you tried setting your graphics settings back a notch.
OP
C

install GPU-Z if you already don't have it and confirm that the PCI-E slot is running at the right speed.
OP
C

ill do that and ill post it
OP
C 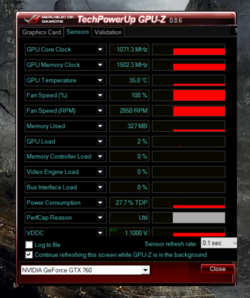 well the stutters are very MUCH less frequent .!

That's a good sign but if they're still there we still need to work on it.
W

What is your OSD showing for GPU usage?
OP
C

The does not seem to be a great load on the GPU. Have you tried V-sync on?
You must log in or register to reply here.

X
Does this stutter/framespikes looks like it s a RAM problem?