First: the MSI Mobo is older, it needed an update to the BIOS to run the RTX 2060 in the 0 slot (Top) It worked fine after that.

Third: The GPU's 2 EVGA RTX's Show up in windows and are using a recent driver 442's or there abouts.

Fourth: I finished the work I was doing, uninstalled the V7 client added the 2nd GPU and tho its seen in windows, the client doesn't see it.

Fifth : I reinstalled (The V7 client)and restarted Windows 3 times, trying to get it to recognize the 2nd GPU (No luck)

So I have found it impossible to manually install a 2nd slot for a GPU it only add's a CPU slot (A real PITA), so I always uninstall reinstall the client...The problem with this is you can not keep it from instantly running. So rather than lose any more WU's ....Hoping someone could help with this. I have done this a few times before and its been successful...at a loss now.

I am hoping the issue is not with the MOBO.

Has anyone ever had success adding a GPU client manually? Maybe I am doing it wrong.

EDIT: I switched to the 2nd GPU for the HDMI out..didn't help. Also MSI Afterburner see's the GPU, which makes me think its the V7 Client.

Switching the new EVGA RTX KO Ultra 2060 with another RTX 2060 from my main PC...Maybe the new KO is the issue...The 2 GPU's will be exactly the same.

Install Windows 10, see if it makes any difference. I'll report back...Not sure if I am up to installing Ubuntu and spending the time getting 2 GPU's to fold.

The Windows 7 PC is now folding 2 standard EVGA RTX 2060's. So it wasn't anything to do with Windows 7 or an old MOBO.
The client isn't seeing the KO version of the 2060.

My main PC runs the 1080 TI but the new KO is not recognized as a usable GPU...Tho its seen in windows and Afterburner (As in the other PC)

OK so I followed this advice to get the KO added https://foldingforum.org/viewtopic.php?f=83&t=26208 ...Hopefully I gave the right info...Thought I was being smart by saving $30 or $40, would have been easier to get the standard RTX 2060

Hope that solves the issue.

You will need to get the updated gpus.txt file on your computer. Just need to delete the old file and wait a few minutes for the FAHClient to download the newest version.

Found a recent post at the folding forum requesting the gpu ID be added and response that it has been done. Not sure if that was you, but the update is done.

That was me Hayes

I am Aka Chex at every other forum...Its up and running...

Bruce got to it fast.

This GPU is thinner than the other 2060's its running cooler...Its thin enough that I think a 3rd GPU of this thickness would fit in my Mobo...albeit at 4x pcie speed. 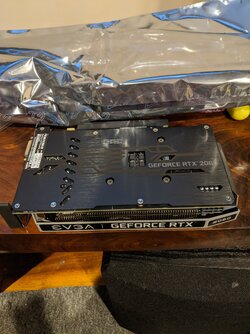 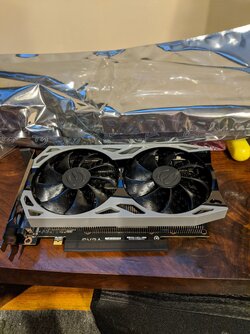 My practice has been to not put 400K ppd or higher GPU on linux x4Gen2 slots. Currently using x8Gen3 slots for my faster cards and the 970s are in x8Gen2, all linux hosts. Windows is less efficient, but x4Gen3 or x8Gen2 would likely be fast enough for the 2060. Core_22 appears to be using a lot of pcie bandwidth, causing issues for the folks using 1x risers, even on linux hosts.

yeah I think I'll upgrade to an X570 board on my main folding rig later this year so I can run Gen4 slots at x8/x8/x4. That should work well to run three fast GPUs on one board without having to go to HEDT. The x4Gen2 slot is definitely not very useful with Core22
You must log in or register to reply here.

Bit of a boost, while the Texacans are down.

What are the newest drivers that work best with [email protected]?