Overclockers is supported by our readers. When you click a link to make a purchase, we may earn a commission. Learn More.
H

I recently changed my fluid in my loop from just treated water to PrimoChill's True Opaque fluid, but my temps have been really all over the place, and have just been considerably higher than before.

First, I was running EKWB's fluid that comes with the EK-KIT P240 and that worked fairly well. I think around 35c on idle. Then I flushed that out to replace with PrimoChill's SysPrep which had the same idle temps. But now I'm running around 40c. I've been trying to figure out what would cause that temp gain. It was odd, the first day was about 40c, then the next it was around 35c. I assumed because I worked out enough air bubbles. But then the next day back up to 40c. And I don't think the ambient temp has changed that much.

As for under load (Prime95), I'm hitting 58-60c instantly, and after about 5mins it shoots up to 70c. I think that's the part where the hotter liquid is finally making a full circuit in the loop, but I'm unsure. 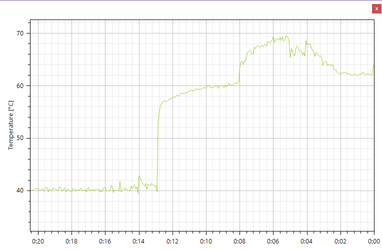 These temps seem very hot to me, and being hotter than it was before seems to indicate some problem, but I don't see any issues. 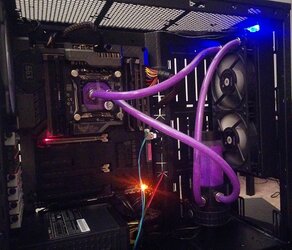 Colored fluids/dyes do not dissipate heat like plain distilled water. That's your problem right there. We suggest if you want color, use colored tubing instead. Your temp issues could be related to air still trapped in the rad. It'll take some time for all the air to be removed and your temps might equalize. Try tilting your case in opposite directions while tapping the rad with the palm of your hand.

Suggestion tho: Ditch that colored fluid before you run into real issues like fluid break down and clogging of pump/rad and block.

As already stated, get rid of the color, pastel and distilled DIY fluids and stick with clear premixed fluids from EK, Aquacomputer and the likes.

This will also need a complete break down to clean out all your stuff.

My aoi has the same temps (35/40). Can't give a prime95# to compare. Seems fine other than what has already been stated.

True opaque means bits of matter, otherwise how could it be opaque? Micro channels are clogged in the block. Major tear down is best. No PC for 2 days, we survive, hope you can.


habbajabba said:
My aoi has the same temps (35/40). Can't give a prime95# to compare. Seems fine other than what has already been stated.
Click to expand...

Ambient temps? Fan speeds, load? Data means nothing without comparisons. He doesn't have an AIO, he has real watercooling.

Directly form the Primochill site regarding this fluid.

As with all Opaque fluids, buildup of particles in the micro channels of water blocks will occur over time. This buildup/blockage can cause the fluid in your system to flow slower and could possibly stop flow all together. System pressure also plays a role in how well True Opaque performs. The combination of high pressure loops and microchannel water blocks will accelerate the breakdown of True Opaque coolant. We STRONGLY recommend using a pressure relief valve in every water-cooling loop. If you notice ANY collection or separation of True Opaque, drain and rinse your system IMMEDIATELY. Running your system with True Opaque coolant after it has separated can cause unknown issues and could require the user to remove, open, and clean each individual component in the system.


PrimoChill is not responsible for any hardware damage. Use at your own risk.
Click to expand...

Soulcatcher668 said:
Directly form the Primochill site regarding this fluid.

But but but it looks sooooo good!! I badly wanted to use opaque fluid in my upcoming build. But decided to take the advise here and just get colored tubing.
You must log in or register to reply here.

I
Unsure of overclocking CPU temps?