I'm getting high VRM temps that set off the 90º temperature alarm when I run certain heavy loads on my Gigabyte x299 Designare EX-based system.

The build is with a core i9-7980X which has been delidded, TIM replaced with liquid metal, and binned stable at 4.5 GHz by Silicon Lottery

My overclock is per Silicon Lottery's binned spec:

I'm using Enhanced Multi-Core and Energy Efficient Turbo so my system only revs up to 4.5 under load. Most of the time it's running slow, silent and cool.

Even at load, the CPU runs cool with temps in the 70s and 80s. Maybe sometimes peaking at 90, but never staying there.

But certain loads, like FFmpeg transcodes will send my VRM temps thru the roof, peak the fan and set off the alarm.

I thought this motherboard had VRM temp problems under control. In fact, I posted a thread on Gigabyte's x299 forum a while back because I didn't understand why the fan curve was set to only kick in at around 90º. It turns out the reason is because VRMs are supposed stay cool on this MB.

Here's some pics of core temps and fan activity, and what my OC is in BIOS:

Any suggestions on how to get my VRM temps under control? If I remove the OC and go back to my default CPU BIOS settings, I can run FFmpeg without the temperature alarm. But this OC is not aggressive. It's stable, and the CPU is running cool and unthrottled. I'm concerned about the VRM alarm and don't want fry my board. What should I do?

Any advice much appreciated, thanks!

What case do you have? Can you fractions the fan setup in the case in detail for us?

ATMINSIDE said:
What case do you have? Can you fractions the fan setup in the case in detail for us?
Click to expand...

The case is a Fractal Design Define C

The build is designed for speed and silence. No glass windows or visible RGB. Today I added a 40x20mm Noctua fan on top of the VRM heatsink as shown in this video:


I thought I had the problem solved but after about 25 minutes of encoding, VRM temps broke 90º again. I have a second fan arriving Thursday and we'll see if that's enough to keep the temps in check.

What is the arrangement of the case fans?
OP
D

ATMINSIDE said:
What is the arrangement of the case fans?
Click to expand...

The CPU is being cooled by a 360mm AIO. The radiator is front-mounted in a pull configuration with the fans behind. There's a 140mm rear and two 140mm top exhaust fans.

It's a pretty simple build and there's lots of space in the case even though it's compact.

Sounds like you have plenty of case airflow then, that's good. Do you have a shot of HWInfo or similar to show us voltages on the whole system while running under load? It could be that auto on your board is setting too high.
Have you tried taking off the VRM heatsink to ensure the thermal pad is making good contact with the VRM chips?
OP
D

ATMINSIDE said:
Sounds like you have plenty of case airflow then, that's good. Do you have a shot of HWInfo or similar to show us voltages on the whole system while running under load? It could be that auto on your board is setting too high.
Have you tried taking off the VRM heatsink to ensure the thermal pad is making good contact with the VRM chips?
Click to expand...

I'd have to disassemble the MB to get the VRM heatsink off which is a huge PITA and not worth doing. I usually use the rig under macOS (it's a Hackintosh) but next time I boot into Windows I can try running a comparable load and get a HWInfo shot. Too high voltage under auto is an interesting idea worth investigating. I do remember that VRMs stayed cool the last time I tested with Prime95.

In the interim, here's a solution that seems to work: 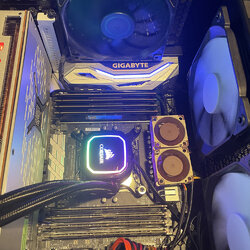 I attached two 40x20mm Noctua fans to the VRM heatsink that are both on the same header and controlled by a fan curve tied to VRM temperature. Ugly, but it's a sound damped case and I can't see inside. They only spin up under load and I was able to do a 30-minute ProRes to HEVC encode without the motherboard VRM fan kicking in. This means VRMs never hit 90º with both fans on the heatsink. No more VRM alarm so I think we're good!
Last edited: Feb 18, 2021

Hey, ugly but works is my mantra! I like it, let us know how it continues to work for you.
You must log in or register to reply here.

I
Unsure of overclocking CPU temps?

S
Higher temps with vcore offset than manual, am i missing something?