How bad is this? GPU bleeding?

I've never seen this before, at least not to this extent. It Looks like my thermal pads are sweating. Is it time for new pads or is this nothing to be concerned about? 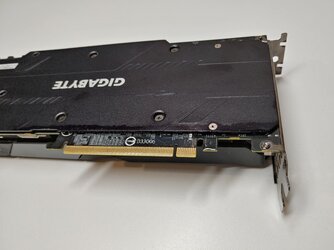 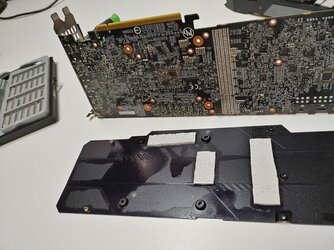 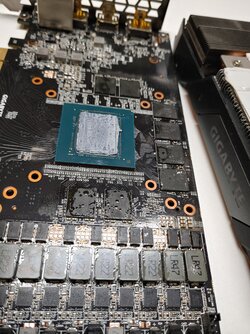 It's pretty common when you are mining and memory runs at high temps for a long time. Depends on thermal pads, you will see it more or less. It would be worse if they dried and cracked. As far as it doesn't look good, it seems fine.

That's pretty bad... but like Woomack said, when you're riding the memory hard like that, depending on what thermal pads are used, they can get oily like that. Annoying, isn't it?

So is that oil conductive? The card is running fine, thought slightly hotter than usual under the same conditions, but the oil did run down into the PCIe slot.

EDIT: I wonder if I should just order new pads that don't bleed all over my shtuff. I saw a Reddit post todaythat had the same thing, also a gigabyte card so most likely the type of pads they use.
W

If it was conductive then your card would probably burn I had the same on some cards and there were no problems. If you can check memory temp (maybe GPUZ or hwinfo64) then you will know if it's safe. The same is happening on some higher series cards like RTX3080+ when they run with RAM at 100Â°C+. People replace thermal pads and it's usually better. The only question is for how long.

I wonder how my cards will look in some time. Especially RX6800XT which runs in a small ITX PC with a mixed gaming/mining schedule

The 2070 doesn't have a memory sensor (at least not this one) but the temps that it does report are well within spec. The temp that gets reported (core I believe) generally sits at 41c while mining 24/7. Recently, it jumped to 52c. That's when I looked and noticed the oily liquid. I repasted after opening it but haven't touched the pads yet. The reported temp is now 46c. So the repaste has helped but the temp was never really an issue.

Thanks for the input guys. I'll continue to monitor it and if it continues I'll just repad it for assurances.

I've come to see this as kind of normal, at least for a lot of runtime or usage over an extended period.

I've seen it EVGA cards, Asus cards, Gigabyte cards, and maybe some others. Brand doesn't seem to matter, and it seems like most use a similar consistency pad that's either brown, black, or gray. I've seen this on cards that have only ever been gamed on and cards that have been mined and/or gamed on (mixed usage), tends to happen within anywhere from 6 months to 2+ years of usage. GTX 970's, 980's, 1060's, 1070's, 1080's, 1660 Super's, 2060 Supers, R9 390's, are just a few models I've found this on. Seems to happen more on higher power or hotter running cards, not so much on low-power cards. Like it's some kind of a chemical reaction due to the heat.

I don't think it's conductive as I've found some cards that have this oily film all over them and still worked fine. I tend to clean it off though when I find it on a card I've torn down to repaste (rubbing alcohol and paper towels, or spray the card down with electrical contact cleaner). It is a bit of a pain to get all of that oily film off though, seems to stick to a card and get caught in tight areas.

I seem to find it a lot around the VRM's/power section of a card, I'm guessing because that area runs hotter.

Can't say I fully understand what this oily film is made of though, or what to call it, but it does seem to come from the thermal pads.

Wow thats new to me first time ive seen this thanx for pics and post
You must log in or register to reply here.

What CPU's/GPU's have you mined with over the years