How many fan can be run from the CPU PWM header

Im in the process of doing a new build and thinking of using one of these 8 x 4-Pin PWM Fan Splitter PCB so that the fan on my rad and my case fans can be dependent on CPU temp . Is it safe to run that many fans from one header ?

These are the fans in question that I am looking at . 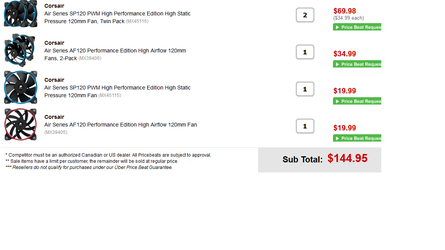 I have 11 fans on my PWM fan hub and connected to the CPU fan header on the mobo. With a temp curve set it's virtually silent.

I wouldn't run more than 2 fans via splitters from the cpu header.

You can buy a separate pwm hub (like neb) and connect it to the cpu header but in that case the power comes from a separate sata connector and only the pwm signal is taken from the cpu header. In that scenario you can run as many as the hub you buy supports.

Does that thing take a bay or do you just stick it to the case wall ?

Stick it to the case. The Phanteks one is quite small. You can see it in this pic

The one on newegg is the same one except it's in a case. The Silverstone one I have no idea how big it is, but I'm sure it's about the same size.

Typically depends on the amperage required by each fan.

Usually this means a maximum of two to possibly three fans per header. And I've never exceeded this as my fans are 0.20-0.4 Amps per fan, and I've just never felt safe going with more than two fans. I have had my fans throttle though with two 0.30 Amp fans (0.60 Amps total) connected to the same channel on my fan controller though (and the connector started getting hot, so I moved those fans to separate channels).
You must log in or register to reply here.