How to set-up LEDs in my case?

I'm not exactly sure where to post this. It doesn't even really belong on this forum but i know quite a few people are knowledgeable with electronics so anything you can say would help

Unfortunately I only have knowledge of electronics from Gr.9 Science... LOL. Be gentle on me.

If i have 10 LEDs in a parallel circuit with 12 v power source (molex yellow black?) can i just give each LED a 560 ohm resistor and it will all work out fine.

The thing is, the LEDS i'm ordering come with free resistors but they are 560ohm. I know that is good for 12v power source, but if i have multiple lights in one circuit i'm not sure i need that many resistors.

What would be the best way to set up these LEDS and each having their own power source is not an option LOL.

Here is the schematic to what i think will work (i think did the LED symbol wrong lol, and a couple other things as well): 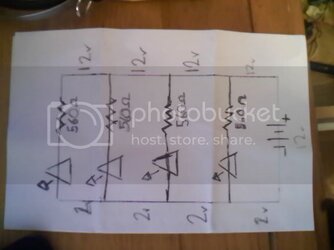 Yes you're a bit off on LED diagram. Close, see attached image for the correct version. The triangle always point toward negative side of the circuit (Cathode, #1 in diagram)

Second, a simple math equation for getting resistor value is: (V source - LED v)/LED I Since LED current are measured in mA, multiply that by 1000 to get amp.

Next, each LED should have its own resistor. While you could get away using 1 resistor for all LEDs in parallel, it is not suggested anyway. The reason is you're running 10 LEDs in parallel and there would be a total of 0.2 A that would have to go through the resistor. If my math is right, to use one resistor with 10 parallel LEDs, you need a 2 watts resistor minimum. 1/4 watt resistor is normal for single LEDs and it's probably what is included for free.

Don't think about typing up 10 resistors in parallel for 2W, parallel resistor divids total resistance. So 10x 560 ohms resistor would only measure 56 ohms, and burn the LEDs up in a hurry. It is simply much easier and better to use single resistor for each LED

Your schamtic diagram has the correct wiring, use that.

Final point, it does not matter which side the resistor connects to LED, and resistors are not polarity specific so don't worry about those. Only watch the LED polarity, as they won't light up if you place them in backward.

nice explanation there 4Ghz... another idea might be to connect 6 Amber LEDs in series(- on one LED connected to the + of the other and so on, so they look like a pearl necklace, and you wont need a resistor.
for Blue and violet, you cant series 6, 12(source)/3(LED voltage drop) = 4, so you can connect 4 or 5 of them.
You must log in or register to reply here.

How to set-up LEDs in my case?