This took 6 hours just installing the loop. I kept changing my mind. I'm thinking about using a T somewhere in here for draining, but then again, I never use one and manage to drain without spilling much. 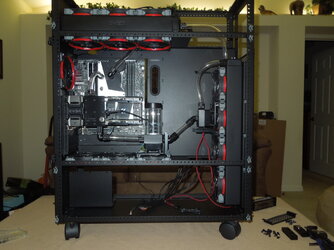 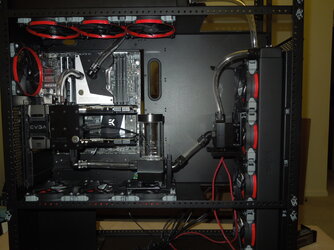 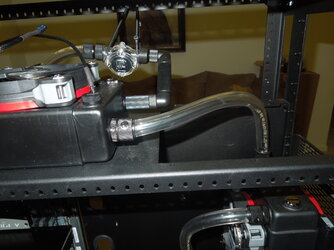 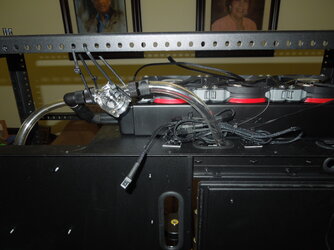 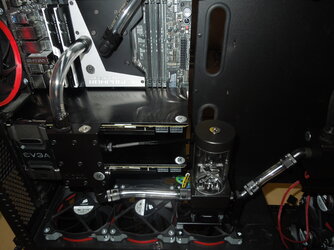 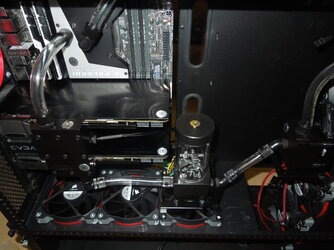 Looks good . If you do want a drain maybe put a 3 way for a drain right there

Yup, looks good to me too. Didn't know you had 2 pumps until the last 2 pics, lol. You could've installed a drain valve between the pumps or between the gpu block and pump to make it easier to drain. Hopefully you won't have to drain periodically.
OP

I just filled it. No leaks yet...as always. Unless you have a defective part or pierce the rad by using too long of screws, it's kind of card to screw up compression fittings if you put the tube on the barb all of the way. I always screw those suckers on so tight sometimes the fitting wants to unscrew instead of the cap when I remove them. I can't believe I used to use clamps. Well, clamps 5.00 and compression fittings 100.00.

Yes, always two pumps for redundancy. I can't believe how much of a difference it made in the flow with two pumps. I always thought the flow was the same, but the head pressure was higher. After it was filled, I unplugged the res pump and plugged in the other. The flow was the same. I'm not kidding when I say this, when I plugged in both and started the PSU it reminded me of a jet engine starting. I heard this suction sound and the res dropped by a little less than half and I could just tell the flow was much faster.

I was going to use Primchill True blood red. I rarely use colorings. I kept kicking it around and just went with DW with Utopia. I USED to use a kill coil until I've read about silver and EK nickle blocks. Dang, I found some dead water and PT Nuke in my collection of biocides, but since the Utopia is newer and you just use all 15ml in a gallon, I used it instead.

That is Tygon plastisizer free tubing. We shall see. I really, really wanted to go hardline, but I would probably need 100 feet of PEG, a punching bag and valium to try it.

Sweet! Keep us posted on temps and results

Would I be better plugging it into a fan connector to get the RPM? I tried to set it as a fan on the controller and it won't read the RPM.

Edit***** I found this on another message board.

i bought the same flow meter and asked same question

answer from bitspower was, its only a rpm signal to connect on motherboard cpu fan header
yo can set a alarm or shutdown if no rpm, no more than that, you cant use this to know your flow rate

if you want your flow, you need to use koolance or aquacomputer products
Last edited: May 6, 2017

Well that sux. I've never been a fan of flow meters anyways. To me they hinder performance to the pump. I got my pump attached to the cpu fan header on my mobo and can control flow rate and have RPM signal. I'm happy with that.

on my hotter running rigs, 9590/ titan sc and a 6800K rig, cpu only, I just run the pumps at full scream doesn't seem to bother anything.

OP, nice case and rig. A few things I would do differently so take this all with a grain of salt as it's just my personal taste. I would get a dual DDC top for both pumps in serial and somehow figure out where they can sit. 2nd thing I would do is get a bigger tube res as smaller tubes are visibly for smaller rigs. 3rd thing I'd do is grab either a Koolance flow meter with display or a aquacomputer but that involves installing an USB connection for it and software just to get some readings therefore I would just go with the Koolance one. 4th, a T-line as already posted would be ideal so its easier to drain. 5th, GL on colored fluids.
OP

Too later for now....it's up and running.

When I tear it apart again, I'll consider a larger tube and the dual top,

What sucks is I had all of the power connectors nice and pretty with the combs. I hit the power switch and nothing. My connections are all the same colored wires and have no markings on which is + and -, so I figured that I had them reversed. I hit the power switch on the board itself, still nothing. Now I'm freaking out. I'm using Cable Mod cables for my AX1500i. I know the 24 pin worked because I ran the pumps and fans off of it jumped. I unplugged the 24, 8, and 4 pins plugs, after taking off the combs, and plugged them back in....still no power. Ugh.... I was using a 4 pin extension, the same one I used in my last setup. I thought, let me unplug the 4 pin and give it a try, boom it fired right up. Now it's down to the extension or 4 pin cable not working. I plugged in the cable without the extension and it fired up fine. I assume that if the 4 pin plug itself had issues or a short, it would fail to power on again. Now I need to recomb the wires. I have no clue why Asus moved the 4 and 8 pin plugs forward. They don't match the grommet at the top of the board. They are right in the middle of the stupid board.. It makes it hard to hide the wires. If I use the back top grommet, I need extensions for both the 4 and 8 pin plugs.

Temps are much better, especially on my PCH and M2 drive now that there are fans blowing over them. CPU temps are around 20, but I'm at stock on Speedstep. GPU's are 26 and 28. Liquid temp between the two GPU's is 24. I have a probe in my second rad too, but my Lamptron won't read them and the board only has one temp sensor connection. Set the pumps at full speed in the BIOS and the fans at 75%. At 100% they really whine. The system is pretty silent considering I'm sitting right next to it and it's still open. I still have a couple of SSD's and drives to put in and either a Blu Ray or the front Supreme sound box. I don't use headphones at all and rarely use CD's, so it'll probably be the Blu Ray burner.

I still have to comb the wires...but here it is. Glad to be using my Corsair keyboard again too. 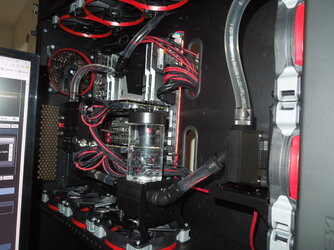 Glad you got it working again.

Your link or image isn't working. Would like to see your finished project.
OP

I think it wouldn't post before. Still have to comb the wires and add two hard drives.
You must log in or register to reply here.