SL and KL can run ALL benchmarks under windows 10, despite the fact that there is BCLK tweaking (which us the reason why no other CPU is allowed to run win8/8.1/10).

That is complete BS and it doesn't make sense. They should allow all benchmarks to be run under Win10, whatever the CPU is, or it is really unfair, and their rule is just plain stupid!

On other CPUs there is an issue with HPET which is causing wrong time calculation. This is affecting barely any benchmarks but they disabled it anyway. You can use Win10 on any CPU and in any benchmark as long as screenshot/verification file/verification link will include info that there is no HPET error. You can make it in all Futuremark benchmarks, GPUPI and some more.
Other thing is that your submission won't be automatically blocked. It's always matter of verification and first someone has to report it. There are situations when you can't use other OS and then it's allowed. Like mobile platforms which are working only on new OS/drivers. For instance you can bench servers and laptops on everything as long as there is no clear submission error on the screenshot.

"Knowing is half the battle.. Go Joe!"

Apparently SL and KL don't have the same internal timer issue that Haswell did with Win8-10. Apparently you're unable to "fool" benchmarks with the updated architecture.
OP

Johan45 said:
Apparently SL and KL don't have the same internal timer issue that Haswell did with Win8-10. Apparently you're unable to "fool" benchmarks with the updated architecture.
Click to expand...

I think it is just an hypocrite way of keeping people benching on SL/KL without too much hassle!

i DON'T SEE IT THAT WAY, YOU CAN BENCH WHATEVER YOU LIKE JUST NOT ALWAYS WITH wIN8-10
W

I see your keyboard issues are back

He loves to shout in person too.

Only when I'm drinking.

So you're saying you need one of these?

I am sure they threw this rule because the rumour was that windows 10 is not running/supported on SL/KL.

I assume you mean on OSes below 10?
OP

That's MS pushing that just like Win7 isn't supported for AM4

I have a question that is related to this topic, I know this is a zombie thread, sorry. But, didn't think this deserved a separate thread. I just want to make sure that I can use Windows 10 with my 7740X (Kaby Lake) and still submit to HWBOT? I tried reading the rules last night, but nearly got a brain seizure from that ordeal.

Looks like I could be 6th in the world for CPU clock and #3 for Super Pi 30M (and that was done with my normal 24/7 OC). This is probably because it's a new processor and not many people have one yet.

I logged onto HWBOT last night and I still have a few points. It says I'm on team OC Forums, so I figure it won't hurt to submit some screenshots and maybe try to break a world record before more hotshots get this CPU.

One last question, my Asus TUF 2 X299 MB came with a fancy CPU-Z with the Asus TUF logo. Can this be used for verification, or do you need to use a certain version to be legal? 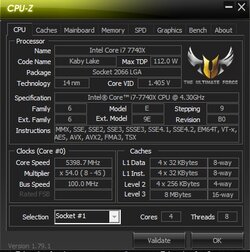 I might have answered one question myself. Looks like HWBOT wants us to use CPU-Z version 1.80 and there are links for custom CPU-Z, but I don't see the one I have listed (looks like it's version 1.79.1). I'll download 1.80 and use the approved version just so there's no question.
W

can use any cpu-z version, just better when it's the latest one ... as long as there is no info that CPU is ES then I doubt that anyone will say anything ( some people are just stupid and will report submission for anything )

This 7740X is not an ES, I bought it from newegg. Well, I played around and did some benching this last weekend. It was fun and I got a few HWBOT points for the team (including team power points which I have no idea what that is). So far, I collected something like 3 gold cups, 2 silver, and 1 bronze. The only ones that are beating me with the 7740X CPU are the liquid nitrogen folks.

It's crazy how well this new rig does with PCmark10. Think I'm #3 globally in that benchmark. Never ran it before, so it took me by surprise. Maybe I need to look into how to optimize for it and try running it with a higher OC. I seem to be doing the best with benchies that take a long time to run and require solid stability. The supercooled guys don't usually bother with those type of benchmarks.

I found out another thing, my water loop is good, but not as great as I thought. I had CPU load temps climbing up into the upper 70s. I have a single rad collecting dust, I might need to slip that into the loop to help add a bit more cooling capacity. I'm half tempted to try this new XSPC Raystorm waterblock I bought and then never took out of the box.
You must log in or register to reply here.