I only just noticed this on my new Zen 3 laptop. Apparently it has been in hwinfo64 since the current version was released early April, but I didn't have any modern AMD systems at that time.

I wonder if it could be a useful diagnostic tool to see how different software behaves, and when. This is new to me so I don't even know if the numbers it reports even make any sense, but this is an exciting new tool for probing software + hardware performance in more detail than just looking at the end output.

I don't have an AMD system handy ATM to check it...but I don't see it on X299 and Z590 systems. Can you post a screenshot, perhaps?

EDIT: I wonder why it would show for AMD, but not Intel. It's memory bandwidth...

That is a good question. I am not entirely sure it is entirely accurate..

For instance, if I am running TM5, a memory tester, it could say it is moving say 80GB/s but HWinfo will say its moving 30, or 50. I don't recall off hand the exact number but something along those lines.
OP

It is in the CPU section. I don't have the laptop powered up right now so can't check exactly. Presumably it is a performance value read out of the AMD CPU, hence you wont find it on an Intel system unless there is an equivalent report there. If this is what I hope it is, it is the real time bandwidth, not the peak bandwidth which can be calculated anyway and not so interesting. Seeing it change as it is used is what's new here.

I tried looking up any more info on it, and the little above is all I found on it so far. Beyond that, it will be to try it out and that's not something I immediately have time to do.

I don't have an AMD system handy ATM to check it...but I don't see it on X299 and Z590 systems. Can you post a screenshot, perhaps?
Click to expand... 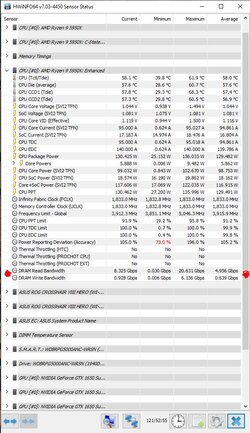 Just did a quick test of this feature vs Aida64 bandwidth tests. Note my version of Aida64 is old and pre-dates Zen 3.

Above are the numerical results. As linked previously someone already questioned that typically mem bandwidth is GB/s but hwinfo shows Gbps as apparently that's what AMD docs use for that value. Numerically it is short of the value measured by aida, so the question then is what does that value represent?

I did a quick play on prime95. As expected, if I use a small FFT, there is hardly any bandwidth showing used. With single large FFT (uses ram, doesn't saturate interface) I'm getting ball park 5 read, 4 writes. The slightly higher reads compared to writes is expected. With multiple large FFTs to really saturate the interface, I get 9 read, 7.5 write. This is obviously a lot lower than what I saw with aida, so I have to rethink what I thought I understood when it came to how the software behaves.
W

AIDA64 uses all threads possible for RAM operations, most other soft is not doing that. It was one of the main updates some versions ago. So it shows maximum bandwidth but other soft is not using maximum values. I have no idea what hwinfo64 is showing. I wasn't really checking its behavior with RAM.
You can also run winsat from command prompt and check how much Windows is showing vs how much hwinfo64 is reporting. Windows mem benchmark is showing OS possible usage. I wasn't checking it for some longer. On older platforms, results in winsat were close to the AIDA64 memory copy results.
OP

Back in the quad core Intel days, before prime number finding software could use multi-thread, we had to run multiple instances to fill up the CPU. Back then, scaling was idea to 2 cores, a bit down on 3 cores, and 4 was hardly any better than 3. Dual channel ram was running out between 2-3 cores worth of loading.

From the hwinfo64 reported values, it looks like 2 cores is already pretty close to hitting the limit. The difference is, the prime95 numbers are way lower than those seen than the aida64 benches, comparing only the values from hwinfo64. Implicitly, although ram bandwidth was taken to be the limitation, as with many things it might be more complicated than that. Prime95 and similar is not meant to maximise bandwidth, but just use as much of it as it needs and can get.

To me, this is still early days, and I want to observe more software before trying to come up with some picture. y-cruncher is a good candidate as I know that also is highly impacted by ram, but not in the same was as prime95.
You must log in or register to reply here.

What controls the Ddr4 Channel Voltage on Haswell E, CPU or Motherboard?

Stress Testing for Beginners: Which tool should I use?
2 3 4