So for more than a week I was researching cooling for the 5950X to replace the Wraith Prism. While playing Cyberpunk 2077 it can reach to 90C, hovering at 87C most of the time and being throttled (4.5GHz to 4.6GHz cap). Then sometimes spiking and shutting my system down frequently. So I stayed away from Cyberpunk for the most part and play other games instead. Sometimes it has shut down playing Battlefield V but it is rare and one time it shut down while playing CoD Cold War. Now, I reduced the shutdowns by sticking a 120mm fan sitting sideways on top of the 3090 FE just blowing into the CPU heatsink. Not the most aesthetic solution but it manages... sort of. The thing is that even like that, sometimes the rate at what the heatsink can dissipate heat can't keep up with the speed at what the CPU can heat up suddenly, thus failing and rendering a system shutdown.

Anyway, while researching I gravitated towards two options. The Dark Rock Pro 4 or the Noctua NH-D15 chromax.black. I felt the D15 looks cooler. Although I prefer the Master Cooler MA620m as far as design goes, but it's not as capable as those two.

I looked for other options for a few days with no avail until I stumbled across this.

What an insane air cooler design. It uses a different technology than normal heatpipes and it's 4.4 lbs with all four fans.

After a couple of more days I decided to jump the gun and went for it so it's on its way now. I'll have some results when it gets home.

Final Result - See the journey and temp results in posts below & page 2. 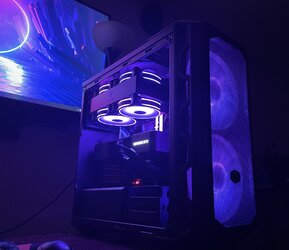 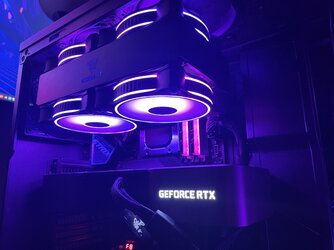 That thing is ridiculous in size....lol.

Here's a look at the prototype...https://www.tomshardware.com/reviews/icegiant-prototype-thermosiphon-cooler

That design is going to hoover the heat from the 3090 right into that monstrosity. Curious to see how it works out with 350W pumping below it.

Looking at the pics I don't see an extra support for that monster. At over 4lbs I wouldn't want to mount that on my motherboard without some kind of stand for it. I would hope they would add something to support it and seriously two screws to hold that thing on the mount??? Unless I was mounting that thing with the motherboard facing up I personally wouldn't use it at this point. Give it some time to mature then maybe but not right now.

I saw someone here on OCF recently mention this IceGiant Cooler for their AMD Treadripper setup... I hadn't seen it before and was looking at some of the prototype videos for it.

That thing sure is massive! Like BugFreak mentioned I could possibly see it running flat (horizontal) on a bench style open air setup but I kind of wonder about a vertical mount in case?

I look forward to seeing how it cools your 5950X and your thoughts about the unit it once it arrives and is setup and tested.

I have ordered and received one of these...the prototype is massive...the production unit is not that big.

I haven't installed it yet...been too busy.

If you read the Linus reviews, he shows data that it cools better than an EKWB water cooling solution. He did 2 separate reviews, one for the prototype and one for the production version (which is much smaller).

It comes with a plate that you attach to the Threadripper mounts on the PCB, and then the cooling unit mounts to the plate. 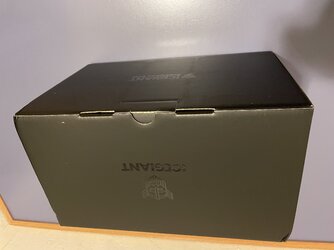 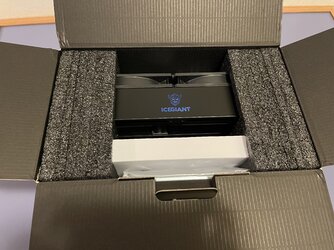 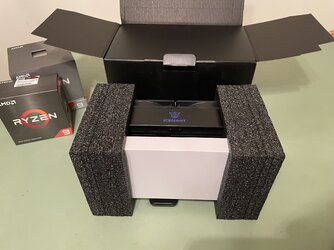 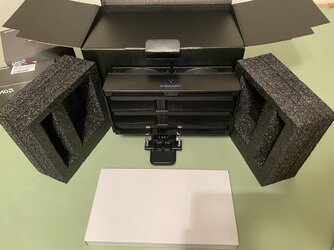 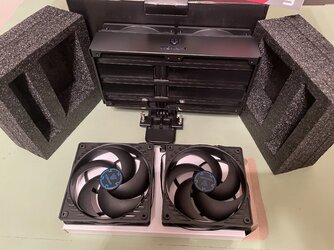 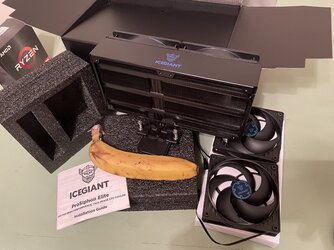 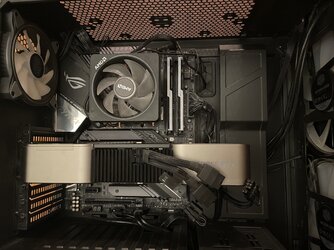 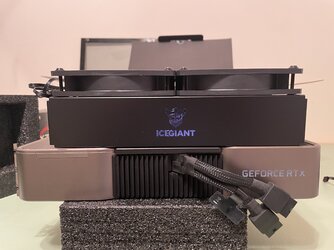 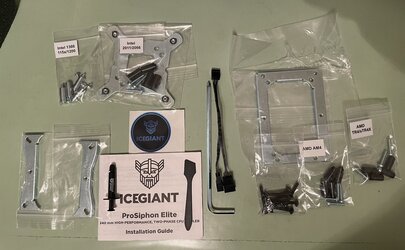 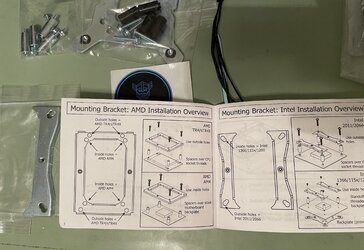 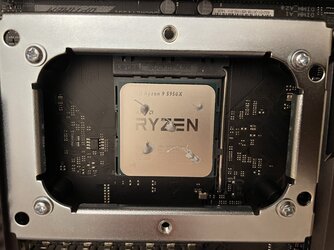 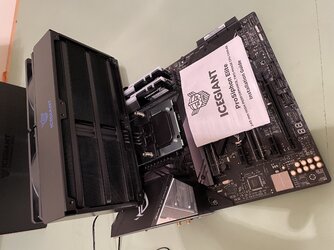 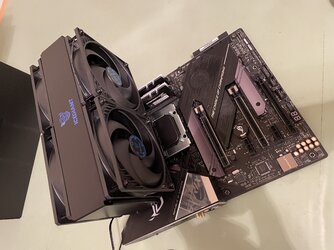 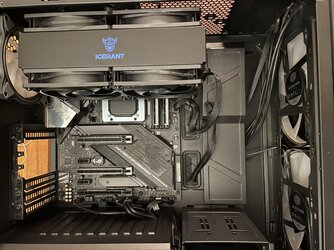 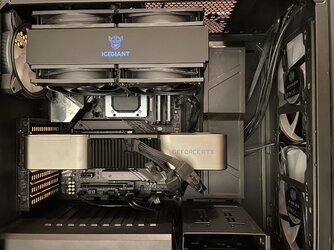 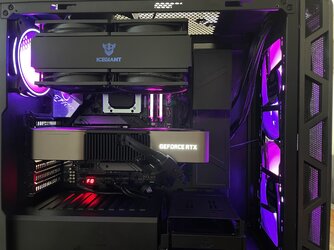 Looks great. I'm thinking of changing the fans to Cooler Master MF120 Halo and see what it takes to process the bracket and have it locally black oxide. I think those two things would make it look out of this world.

Looks great Douk. I would love to see some comparative reviews of this beast, see how she compares to the NH-D15, ML360R, H150i, and Kraken X73 coolers.

Just my opinion but that rear exhaust looks out of place now. You might get better airflow and thermals if you relocate it to the top of the chassis.

Anxiously awaiting some results!!! I'd test out and see what that rear fan does as blaylock said. You're in a bit of a pickle where that cooler is hoovering the heat off that 300W+ card so perhaps a more front to back will allow cooler air to reach that massive heatsink instead of everything exhausting through it and out the op.

Wow that is a monster! Seems to have pretty good clearance to get over the G-Skill ram and Strix shrouds. Still can't believe it only uses two screws but I guess there really isn't a way to use more.

It looks like your fans are blowing up, is that right? I would think drawing cool air in from the top of the case would give you a little better performance. Would also help cool the GPU as well.

It's a six of one half dozen of the other situation IMO.

Either the CPU runs warmer sucking the air off the 3090, or the 3090 runs warmer with the CPU's warmed air circulating.

The OP needs to test and see and figure out which is best for his situation.

Just watched/read a few reviews and it seems to be a great choice for Threadripper. For standard enthusiast-grade CPU's the NH-D15 or custom cooling is still a better choice. Very cool tech however and I can only hope larger companies like Cooler Master, Noctua, be quiet!, and the like will come out with their own versions and generate a nice market.

P.S. LTT also made the same suggestion on removing the rear exhaust and mounting it at the top. He saw a 3°C improvement in his tests.

Holy hell that's BIG! Everybody here knows I like 'em big, but....it's....so....big! I'm hoping that rear bracket can hold it up. For safety measures I would add a GPU like support bracket to take some of the stress off the mobo. I'm using this for my video card: https://www.amazon.com/MSI-GAMING-G...eywords=MSI+Gpu+bracket&qid=1615244667&sr=8-1


Does look wicked tho! Hope it was worth all the trouble.

I will post more results but at setup seen these are some of the results.

Hahaha I didn't know that was a thing until earlier today. I will run that when I get home lol
OP

These are the settings I chose. 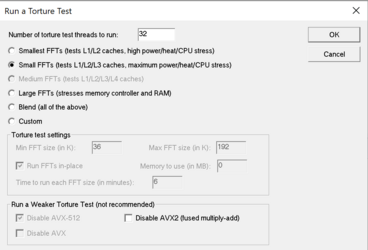 I ran it again for longer. 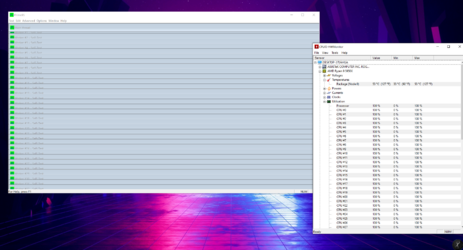 TBH I would NOT want to mount it any way aside from having the board flat on it's back.
Do recall issues with certain coolers ripping out the mounting holes in boards in the past and these days new boards with their thinner PCB woudn't stand a chance vs a 4.4 Lb monster like this.

If you have a way to re-enforce the board's mounting area or support the cooler with the board mounted vertically that's cool, but pointing out that's a potential recipe for disaster here.
Thinking I'm gonna get one of these for my daily - You know how I love monster-sized coolers.

The "Drone" will be happy to see it's new sibling in da house.
OP 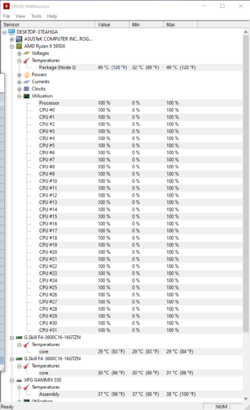