I Need some help

Its been a while from the last time I ran FAH on my own system I had a few clients pumping in some numbers but they seem to have stopped a while ago .
So I have my 4670k running @ 4.5 right now . It auto-ed to use 3 cores on my CPU and 1 for the GPU I guess ? (win10) 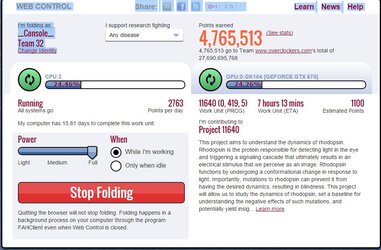 I also have a old i7 920 @ stock that I have Ubuntu installed and FAh running on . any specific settings I should be using on these setups ?

The client sets aside a core/thread for each GPU slot. If you are not going to fold on the GPU, you can change the CPU slot to use all the cores/threads.

Be sure you have a passkey to receive the QRB. Only need one passkey and needs to be entered in all the clients. Need to complete 10 work units to qualify the passkey for the QRB, and maintain 80% success rate for wu (complete without error and return within deadline).

The Advanced Control interface allows addition of parameters for individual slots and remote control/configuration of FAH clients running on other hosts in the same network. Access from the menu on the FAH client icon in the tray.

That passkey sure makes a diff on the point value , If im goiong to jump 50k ppd .

I might have access to a 660gtx that isnt being used would it be better in the win10/haswell system or in the i7 920 system ?
H

My preference for the extra GPU would be linux, but, you need to be aware that the linux core_17 was never patched to fix a slowdown issue which affects Fermi and Kepler cards with drivers later than v327. Linux driver v304 works well on these older cards and is easily installed.

GTX 660 does about 40K ppd in Windows.
You must log in or register to reply here.

Is running [email protected] in VM with Linux in Windows still a thing?

B
I need some help

I found a tool for making universal install USB (Ventoy)

B
I need help with my machine tripping.