I think I "ran out of cooler"

I recently upgraded my cooling by adding higher CFM fans to the heatsink and top of the case but am not seeing lower temps at load. Does this mean Im maxed out on cooling?

You should be able to take the 955BE pretty high with a Megalehems... and I pass gas with more heat than that Athlon...

What clocks and voltages are you at?

We need more information in order to help you out really... this is pretty vague!

knoober said:
I recently upgraded my cooling by adding higher CFM fans to the heatsink and top of the case but am not seeing lower temps at load. Does this mean Im maxed out on cooling?
Click to expand...

Which setup are we speaking about and cooler?


EarthDog said:
For which system?

You should be able to take the 955BE pretty high with a Megalehems... and I pass gas with more heat than that Phenom...
Click to expand...

Fixed that for ya ED...damn Intel guys, you can't teach them anything. LOL
OP

I Oh sorry about the vagueness. It was just kind of a general question like "if A then B right?"

Buuuuut, I would appreciate any help so I'll give the info.... It's the 955 under the Megahalems that I was talking about. The case is a corsair graphite 230t, and I've got fans all over the place.

2x120mm in front of the drive cages for a frosty 30c on my HDDs and 26c for the SSD. These are going g to be replaced soon, but I don't know what to replace them with yet. They are just scavenged fans, 1 of them is a yate loon (the high powered version) and I forget what the other is

2 x 140mm prolimatech slim vortex ( I can't recall what prolimatech calls them, but it has vortex in the name) that are rated for 90cfm @ top speed. They are kind of shoehorned in there, but I made it work

2 x 120mm rosewill fans on the Megahalems. I also forget exactly what these are called but they are rated to push around 70cfm @ top speed. These things are too damn loud at full speed. If they arent making the chip cooler then I gotta get something quieter. I'm thinking of perhaps some but Bitfenix spectra pro (gotta have the blue led )

As for my OC: I'm not in front t of the machine but I'm running @ 3.8 ghz.... Voltage uncertain. I wanna say it stars with a 1.4xx V though. I really had trouble keeping mhz without adding voltage. That was part of why I sought new cooling. I figured if I could drop a couple C then I might be able to push up to 4.0/4.2 ghz. And here I was gonna try to put together a build log to reveal all this stuff in. Shucks!

Edit : the Athlon is in the other rig Mr. Mandrake , and it is under cooling for a phenom II, and will jump up to the 4.2 range with 0 effort. I keep it at stock because of the low powered psu though. I was having random shutdowns @ 4.2 so I changed the psu... Problem cropped back up months later though. Still troubleshooting it. When I get stuck I will make a post all about it I'm sure
Last edited: Mar 11, 2016

The point of the inquiry was to see if you are in the ballpark (and then your if A then B would be applicable) or if your temps were ot of whack and we would point you to a re TIM and mount.

Seems for that overclock and voltage you are in the ballpark, but I would still confirm the TIM application was solid and remount.


Yep, I was talking about your other rig with the Athlon in it.

My bad I read your post wrong ED but I stand by what I said. hahaha

Knoober, really hard to tell what is what just by posting info. When you get a chance give us a peek under the hood so to speak. Open Hwmonitor up and run Prime Blend 20 minutes, post a screen shot of hwmonitor and the following tabs in Cpu-Z, Cpu, Spd and Memory. It may be that you just have a hot chip but well see. I do agree with you, I would think you could get more out of the 955 with the Megahalems on it. I have two of those heatsinks and they still hold their own with the newest and best out there. 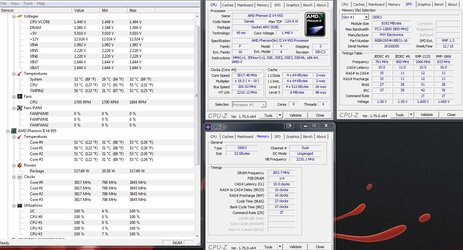 I will try reseating it here one of these days as well. I just havent gotten around to it yet. Personally I hope it makes a difference, but I think Im pretty topped out. Might have to go back to messing with the BIOS.....

Rating on a cooling system has units of °C/W...this is known as the thermal impedance.

The thermal impedance for your CPU and it's heatsink is the sum of:

So, you add all of those up, multiply by the power the CPU is dissipating, and add in ambient to get a rough idea of what the temperature should be.

A better way to do it is to get a couple of temperature readings at different CPU powers...the slope of the line connecting them will be the thermal impedance. The ambient temperature adds 1 for 1, but the slope will be constant.

Your CPU will have a spec for the thermal impedance. You subtract that from the 0.221 number to see how much headroom you have to play with.

I did a post here about how to calculate (http://www.overclockers.com/forums/...clock-Temp-Calculations-101?highlight=thermal)

So, my total CPU system thermal impedance is:

Hardly worth the effort...as the limiting factor is the CPU thermal impedance of 0.17!

Sorry, my mind nearly melted trying to figure out WTH the case had to do with things!!!

Also, wouldn't this vary with the TIM being used? Wouldn't that be a factor in this? Assuming I am understanding this properly, you are assuming the same impedance between everything, which isn't true? The TIM between the die and IHS as well as the TIM used are typically different...

I lumped the die to the CPU outside (that you attach your cooler to) as the CPU. The spec sheet on the processor will give you this value. You can influence this if you are willing to delid your CPU (that's why that works at lowering CPU temps).

Oh man thank you! I am so ready to figure stuff out on paper instead of reading a bunch of reviews and buying a new cooler on the chance it might make an improvement!

knoober said:
Oh man thank you! I am so ready to figure stuff out on paper instead of reading a bunch of reviews and buying a new cooler on the chance it might make an improvement!
Click to expand...

Yeah - I get annoyed when I read cooler reviews and all they say is this one is 1 or 2 C better than that one.

Come on man...calculate the thermal impedance of each cooler, so I can tell if when I plunk it into my system if it will matter!

I have this data (and tons more) on my system with a 5820K and Corsair H110i GTX (which by the way does not suck as much as many will say).

I used the data to determine if fan "a" on the radiator worked better than fan "b"...if speed "a" is better than speed "b". The fans I have now (in my signature) are as much noise as I can stand (and that's not much - hehe) that gives me the best cooling with the radiator on the Corsair unit. At this point, more air helps some, but it's not worth the noise (for me personally).
OP

JrClocker said:
At this point, more air helps some, but it's not worth the noise (for me personally).
Click to expand...

That is kind of where I am at with this project. I am not a silent pc freak or anything, but the added niose here isnt bringing my temps down at all. Back to all the mathmatics I thought I had left behind. Sure was a pain to learn, but it might be usefull for Overclocking? Excellent

boy would I love to. Ive already got a spot planned to drill through the walls so I can keep the rad outside in the winter. I think I have condensation figured out as well (hockey tape) ! Now if I could just get a watercooling setup that wouldnt drain the bank -small watercooling joke - then I could get started

A few things you can do.

1. Acquire a tube of Gelid GC-3 Xtreme. Dismount and remount your heatsink several times until you get your lowest temps. Your results can vary up to 2c between mounts.

3. Cut out your rear grill. Trim the edges with the plastic spines from report covers -- buy those at Staples or the like. If you do this, mounting a pull fan on your heatsink will allow you to entrain the case air and exhaust the case better than a case fan. Look here for an example. You may need a PWM Y-cable if your motherboard has only 1 CPU fan header.
OP

That Thermalright ran was on sale at performance pcs a little while ago and I almost got one. They were sold out through. You don't happen to know of a version with a blue LED do you?

I had actually read an old thread from 2012 or so that claimed you advocated cutting out the back, and I have been waiting to ask you about it. Guess that's cleared up

On a side not I can't claim that smarts led to low profile ram, they were on a good sale (and often go on sale!) so cheap dog is more like it

Edit: After a little thinking I thought I should mention that I greatly enjoy reading reviews and ehume's in particular have been fun to read, but at this point I am just chasing lower temps with new cooler purchases , so I feel as though I am past the point of reading reviews for my needs. I just realized that my earlier comment might have seemeda bit assy (it wasnt, but no one could be blamed for thinking it was) and one of my most read reviews is in here offering advice
Last edited: Mar 12, 2016
D

knoober said:
I recently upgraded my cooling by adding higher CFM fans to the heatsink and top of the case but am not seeing lower temps at load. Does this mean Im maxed out on cooling?
Click to expand...

Nope. You just need better CPU fans. (sometimes what is rated for the fan might not actually be the actual fan speed; remember that. There are many factors that come into play here.)

As for the case, one/two fans is more than sufficient. I haven't seen any tests that have shown a massive amount of fans in the case making any significant different in cooling.

[Edit:] As ehume said, you can try cutting out the fan guards/filters. It will allow greatly volume for intake/outtake. But again, it won't change much. Ambient temperatures makes a huge difference and the volume of air passing over the cooler itself.

You have enough cooler. TIM will not make much difference. If it's not a crappy mount, then you just got a crappy hotbox (high leakage) 955. It happens. Luck of the draw.
You must log in or register to reply here.