Being one of my first real major overclocks I'd love any feedback about how voltages, timings ,etc look from the more experienced OC'ers

Temps are usually upper 40's to lower 50's under continious load, on air. No errors in prime95 either.

It would help tremendously to know what the stock timings and voltages are of your ram...

50C load in Prime95 Large FFT ehh? If thats true, thats impressive! What cooler and what are your ambient temps?

Looks good though from what little we can see! Nice work!
OP

Stock timings according to the manufacturer are 9-9-9-24 (link).

I was using a blend test for the above p95 stress test. I've been going at the large EET for the past hour or so with no problems and temps are still around 50c.

Ambient is around 20c which helps, I've been using the Zalman CNPS10X Quiet to keep this puppy cool.

I dont know a terrible amount about i7 memory, but isnt it running at stock speeds currently (1600Mhz?) at its stock timings? So why the 1.7v as opposed to the 1.5 it needs at those speeds?

I'd like to see a screen shot of the temps full load
but from what little was posted I guess it looks ok for a 4.0GHz clock
OP

I dont know a terrible amount about i7 memory, but isnt it running at stock speeds currently (1600Mhz?) at its stock timings? So why the 1.7v as opposed to the 1.5 it needs at those speeds?
Click to expand...

I was under the impression that along with your normal vcore increase, you needed to increase the ram's voltage to help maintain stability. Although I'm sure I might be wrong about that... 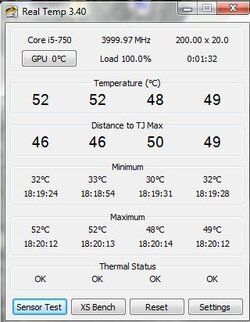 Thats only if the ram is overclocked. I believe its currently at stock speeds. Again, Im hoping someone that knows more can help better.
D

Yes, ED is right on that. If youa re running your STOCK ram speeds (which in your case is 1600mhz), you do NOT need to increase the voltage. Set it to 1.5v and leave it unless you decide to use a divider that brings its over 1600mhz (really, you could probably get away with up to around 1650-1680 on stock voltage, if you needed to).
OP

. Got the RAM running on stock voltage now, it's running perfectly fine.

Nice overclock! I'm fairly new too the most I was able to do was take my E6600 to 3.4ghz, and now I got my Q6600 up to nearly 3.6 with loads of 60c... But I'm getting ready to buy the i5 750 before or after Christmas so its really good to see the potential of the processor.
What kind of build do you have ? I'm picking up cpu/mobo/ram/psu.

My initial thoughts were...

I'd like to know what you got if that's not too much trouble.. and yeah work those clocks on the ram and you should be able to pump if the memorys mhz if its DDR3 I agree with the others on it being 1600mhz. Should increase scores by a lot, 3DMark06 that up!

i noticed the RAM is in single channel mode... you should probably move the second stick if there are two. nice overclock though!

Thanks for looking! I'm using the following things for my build...

It's a sweet processor that's insane fast now, couldn't be happier. I can't seem to say enough good things about the EVGA products. It was the time I've gotten their products. Really top notch stuff. Saved about 300 bucks by going with the i5 over the i7, I'll never use the extra cores that often anyways. Keep me posted on your build and OC!

i noticed the RAM is in single channel mode... you should probably move the second stick if there are two. nice overclock!
Click to expand...

Thanks for noticing, I swear I had them in the correct spots but I'll have to double check. It's a EVGA P55 Mobo.

Edit: I have my memory in the appropriate locations, any ideas why it's reporting only as single channel?

try putting the memory in the empty slots. its probably in dual mode but cpu-z isn't reporting correctly.

that looks very happy to me, i can only get 3.9 on mine...see my sig. i chopped up an old socket 939 arctic cooler cpu cooler, and ive now got my temps at 34* with ambient at 24* i think my ram is what is keeping me from hitting 4

Yeah more often then not I found my ram was the defining factor of holding me back. I don't seem to have much luck when it comes to ram, especially tweaking the timings. Just like everything else thats just trial and error right? and using like that Pi95 test or whatever it is now? I figure once my systems setup and I see what I can do on the stock cooler I'll do a cooling run and buy a heatsink and some new fans. I got a Thermaltake Armor series (fulltower one) so theres a big 220m fan on the side, an intake on the front, 2 exhausts in back and the PSU fan (room for 2!). The glowy blue lights have been annoying me though.

Any suggestions on some decent fans that dont glow? but still look presentable? I know there's tooooooons of fans out there, I need 2 120mm and a 80mm one, thankfully the 220m one doesn't glow. I need to clean my case cause its probably getting dusty but if SpeedFan is right I'm at 40C system, 31C cpu, and 57 GPU. Load is around 38c cpu and 44 system i think, videocard around 80 but that's fairly normal for gpu i think.

I would have to say, those temps (if accurate) are phenomenal. My i5 750 @ 4GHz under a TRUE (with push/pull fans) has a lower vcore requirement (1.285 bios) and under a prime load will still reach the high 60’s, low 70’s. During gaming the load stays in the 50’s but the COD series isn’t optimized for a multi-core configuration.

What kind of cooling do you have Chinstrap?

Because TRUE is a lot easier to type?
You must log in or register to reply here.