Hi guys,
i know it is a laptop question, but its still cooling question

So, i have Asus N750JV which i use for video editing/rendering... Thing is CPU gets, 100C degrees hot. I know that laptops get much more hot, but thing that this is too much. Intel states max for this CPU is 100C.
Exaust air, and top ove the laptop - right above the CPU is crazy hot, so i believe sensors are good.
I have opened down lid, and cleaned fan, and the sink, so there is no dust. Also i use cooling pad.

I have attached Task manager and HWmonitor screenshot. 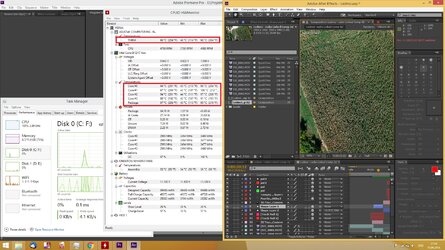 Any advice to get my CPUs temp down would be much appreciated. If the advice is to replace thermal paste on CPU, which paste to use?

Forget about my desktop signature
W

Nope, 100C is max i have seen, and i have been monitoring it.

Sometimes rendering and exporting videos lasts for hours and hours under full 100% CPU load and under those high temps. So you think it shouldn't damage the CPU or shorten its life?

Can you hear the cooling fan running at full speed?

100c won't shorten it's life, you can check that out on the Intel site here is a link https://communities.intel.com/community/tech/processors. Laptops do run hot some more than others depending on there design. The problem with thermal paste it does not flex with the heatsink, laptops need to flex that is why they use a thermal pad most of the time.
OP

wingman99 said:
Can you hear the cooling fan running at full speed?
Click to expand...

Sure, it runs like crazy when CPU is fully loaded, and it is blowing really hot at the exhaust.

Anyway, i would like to get those temps down at least a little bit. I saw i guy on YT (with the same model) cut out plastic bars on the exhaust, he states that the outgoing air is the problem, and it seems that larger space for air to go out does the job by downgrading temps by 4-5 degrees... I don't like the idea of cutting anything off from the expensive laptop, but it may be my last solution.

Honestly, i didn't even know there are thermal pads for conducting heat. Now i'm reading they are not the best solution, and people avoiding them. I thought to change the paste on the CPU, but now i don't know if there is the paste at all
W

If you use paste it will separate with the flexing laptop. People complain when they use paste it is good for a while then it runs hotter then it did before.
OP

Is there any way that thermal pad under my heat sink went bad due to all this 2-year heat stress?

And is there any particular thermal pad brand that you would recommend?
W

Have you tried blowing the dust out of the CPU heat sink? Those fins are very closely packed together and clog easily, especially in dusty environment. Over time, any laptop will get a dust-clogged heat sink and run hot because the heat sink no longer cools efficiently.

If dust accumulation in the heat sink is the problem you will see a cloud of dust flying out of the intake grill.
OP

Sure, i did all of that you said, and temps are as shown on screenshot above.
B

mraka said:
..... temps are as shown on screenshot above.
Click to expand...

It's been years since your post, but I still wanted to add something here since I couldn't see anyone that has ever mentioned :

Have you ever noticed your current Core frequencies and your laptops Max on that session in HW Monitor? Lucky you're using that app. (I recommend everyone to check their brand new systems with 1.memtestx86 2.Hwmonitor.)

Most laptops, even desktops with inadequate cooling (like those with Intel's stock fans) are prone to thermal throttling, which reduces the CPU frequency, thus your performance to drastically low values. You're (or you were then) working at around 2800 mHz line while your maximum is 3400.
I myself have a similar machine N550JV (which currently has an irrepairable bios problem, which happened after adding a second harddisk in DVD slot, be careful not to mess with the operating system like I did. Requires motherboard replacement. Waiting for a bios chip as a last resort.)
Anyways, it is the same and frequency is reduced to values like 2200 mHz to keep the temp at 85 degrees. Rendering performance is eventually reduced.

It was getting even hotter at times and forcing the system to sleep before.(During iray render)
I have replaced the thermal paste once and benefited from it. The original paste was severely misaligned and half of the contact surface wasn't touching any sink area, only air.
One more interesting thing was, this device works at full 3400mHz speed when works over batteries. Of course you have to set the device to run at 100% speed when on batteries from advanced power options. I could never come up with a satisfactory explanation to this. May be the batteries increase the temperature further during charge. I gave up searching for an answer.

Hope this can help anyone who needs an explanation on erratic performance behavior.

You can get a laptop cooler, I use 1 from CoolerMaster like this: 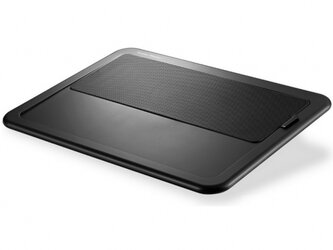 Pick the brand and model that fits your laptop.
G

Ive recently bought a used n750jk notebook wich has the i7 4700hq cpu and 16gb ram(€250 good deal right?). The cpu heated up as much as 100 degrees while browsing, wich wasn't right. I changed the thermalpaste as soon as i got it but the problem remained. I took my time to open it again and replace it again but this time i found out that the heatsink didnt have full contact with the cpu wich caused the heating. I found out that i dint clean the old thermalpaste good enough wich caused inconsistenties on the surface. After making it flat and cleaning it good i put the thermalpaste on it and closed it up. The temps now reach max 68 degrees after 45 min of cpu stress test. If u still have the laptop with the same problem, just make sure to clean the heatsink and the cpu as good as possible so it has 100% contact. Hope it helps even tho this is an old thread.
S

This will bring your temps down a good 10c or more I got one for my gaming laptop and it did wonders. https://www.amazon.com/Temperature-Auto-Temp-Detection-2600-5000RPM-Nintendo/dp/B01NACVLWM and good thing its you can easily remove it for when your just web surfing and the bracket used to attach it is low profile.
You must log in or register to reply here.