I've tried Opera browser a number of times down through the years but never liked it as much as Firefox and Chrome. I'm a little frustrated with Chrome as there are still crashes caused by Flash Player or Pepperflash or whatever plugin they use for streaming video these days. Then last night I noticed that Foxnews.com was using 32% of my overclocked 6600k CPU. I loaded a number of other sites I commonly visit and did not get this high CPU usage. Same thing with Edge. Foxnews.com would cause 32% CPU usage.

So on a whim I downloaded and installed Opera, which I had not tried in a couple of years probably. No high CPU usage when I load foxnews.com. So far no crashes like with Chrome. It's fast and easy to use. Well-layed out. Unlike Edge it's full-featured. Comes with a built-in customizable ad blocker. I'm really impressed with it so far.

I haven't touched Opera in years.. likely won't Chrome works a charm for me in my uses.

Foxnews doesn't do that to me on either system (skylake/broadwell-e)...what are you doing there which causes such high CPU use? Do you have a link to the page that does it (tried navigating through several stories and I didn't see 1% use). Are you running any extensions/plugins with your Chrome (I don't run any)? I would look there before I blamed the actual browser itself.

2 reasons i don't use Opera full time : no option to import/export bookmarks (you need an addon that doesn't save passwords and even then you can't load it properly into other browsers) and no option to disable javascript per page as Chrome does. Otherwise it's topnotch, only a shade slower loading pages then Firefox

Kenrou said:
2 reasons i don't use Opera full time : no option to import/export bookmarks (you need an addon that doesn't save passwords and even then you can't load it properly into other browsers) and no option to disable javascript per page as Chrome does. Otherwise it's topnotch, only a shade slower loading pages then Firefox

Apparently no longer true. I imported my bookmarks with Opera's built-in tool.

You still can't export bookmarks without the addon just installed latest version and you can now block javascript in specific websites, sweet. Curious about the VPN : https://nakedsecurity.sophos.com/20...r-starts-running-traffic-through-its-own-vpn/
OP

Yeah, the "VPN" thing is interesting.

Funny thing is that foxnews.com does not produce high cpu usage in Chrome on my laptop like it does on my desktop. I just checked that. So I'm wondering if this has something to do with a script/gpu driver interaction? Any ideas?

trents said:
Funny thing is that foxnews.com does not produce high cpu usage in Chrome on my laptop like it does on my desktop. I just checked that. So I'm wondering if this has something to do with a script/gpu driver interaction? Any ideas?
Click to expand...

As I mentioned in the my first post, check if its a plug in or extension you may be using.

Try swapping out drivers... could be something there as well, but, I doubt it.
OP

Ah, yes. It turned out to be Adblocker Plus causing the problem. But why on that particular site and not on others? The other puzzling thing is that on my laptop I have Adblock Plus enabled on the same foxnews.com site and I'm not getting high cpu usage.

So one thing I'm going to monitor over time is the effectiveness of Opera's built-in ad blocker. If it proves to be effective and not problematic, that is a plus to me on the side of moving over to Opera permanently. It occurs to me that something built-in to a product is less likely to cause issues than a third party add on.

More input on this. On my desktop I recently installed a Chrome plugin called "Disable HTML 5 Autoplay." As it turns out, that may be the culprit instead of Ad Blocker Plus. And when I added that plugin to Chrome on my laptop I get that same high CPU usage on foxnews.com. But again, not on other websites.
Last edited: Dec 9, 2016

I used to love Opera, switched to Chrome and haven't looked back.

In case you didn't know (or if you do care) Opera was sold this summer to a Chinese company: https://www.engadget.com/2016/07/18/opera-browser-sold-to-a-chinese-consortium-for-600-million/

So that's why it's working so well now...
OP

Kenrou said:
So that's why it's working so well now...
Click to expand...

You beat me to lt.

I have the exact opposite experience. Opera takes forever to load pages, loads some of some pages (MSN homepage I get titles only, 1 or 2 pictures) I'm looking for a replacement that isn't a burning dog, or it's derivatives, or Chrome.

Mine isn't on by default, I left it off. My thoughts were it would make even slower. If it gets much slower I can upgrade to IE8. LOL

but in all fairness, it actually runs faster with the adblock on which is a 1st for me. If you're looking for pure speed and nothing else Edge is the best from almost all benchmarks/reviews i read (but we all know the downsides). Firefox is fast but bogs down after a few days for some strange reason but in the end it's usually all down to the software you got running in the background and plugins, so YMMV.

I'll turn it on and see what happens. It can't hurt. If it gets much more inconsistent it will make coffee when I hit the 'Back' button.

update: I turned on the ad blocker and did seem to get some positive results. Still don't get pictures, content or Flash on the MSN homepage, though.

Wish mine would make coffee, sick and tired of tea
OP

Blocking things on the MSN homepage would seem to be a plus to me, Alaric.
Last edited: Dec 10, 2016

trents said:
Blocking things on the MSN homepage would seem to be a plus to me, Alaric.
Click to expand...

In most cases that would be true, but this is just silly. The whole page looks like the snip below. It's not so much heartbreak over MSN's content it's the fact that a browser in 2016 can't render a Microsoft page. That's just ridiculous. 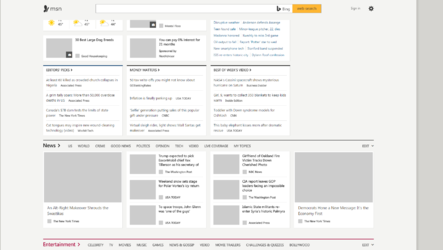 I found a tool for making universal install USB (Ventoy)

O
Uses of FPGA vs GPU?