First, let me share my build and the load I am stressing my pc on. Also, these bad temps reading are with absolutely no OC whatsoever. This is all out-of-box.

Why the hell is my CPU burning up? I'll watch the corsair link, and when idle I am at 35c-45c at 10% load. Everything else such as the GPU's are cool around 28c, but only the CPU cores and package are too warm for idle and getting murked by gaming. btw, room temp in my house is around 18c-22c. Also pump rmp is at 1800 during idle, good or bad?

I've tried re-applying thermal paste. I shut down the Windows 10 module TI worker because it was causing temps spikes by taking random 26% loads from cpu during gaming or idle. changed my fans from intake to exhaust and then back...still same problem. It's like I am having huge temp spikes. Sometimes it holds steady at 55c during gaming, then i get an alert because out of nowhere it jumps to 74c.

I thought maybe is was the resolution being at 2560x1440...but then how are my Gpus being beast and holding at 40c max? My cpu is driving me up the wall. Been all over Tom's Hardware, Intel's website, Tweakers, random troubleshooting forums and no one is having this problem but me.

Does anyone here have any clue what is wrong? Bad water pump on cpu rad? Too much load? Please someone help...lmao 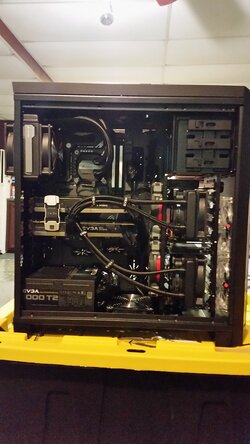 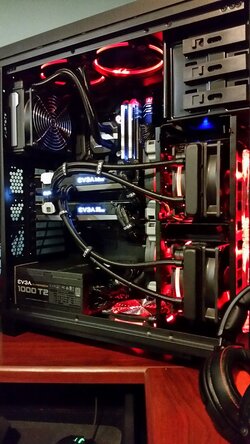 How did the thermal compound pattern look when you reapplied it? When I first installed H110i GTX on mine, I was getting higher temps than expected too. By pushing on the waterblock, I saw temps drop. It was a loose fit. Re-apllied it, checking it was tight. No change. I put some extra insulating washers in to increase the tension a bit more, and that did the trick. Lower temps. There was discussion on the Corsair forums that Asus boards are thinner than average, and there were other posts saying similar.
D

I just want to say, Holy Fans! I thought I went a little overboard!

Very clean looking rig. I like your improvisation with the GPU's radiators.

As far as your temps go, check out Mackerel's post, but it may be that your H80i isn't up to the task of cooling that i7.
OP
M

I am absolutely green on OC subject matter and had no idea that CPU core/cache voltage at 1.47v was very very high. Also with bios setting set to AUTO, the mobo had my cpu overclock at 4.6ghz and turbo set at 5.1ghz!!! I didn't toy with the bios when on first boot, so I am shocked to why the auto setting would even configure such a dangerously high setting.

And thank you. Yes Fans fans fans, but it's to compensate for the GPU's radiators blocking the front intake. And surprisingly, even though both fans on the CPU cooler and GPU radiators are Koolance 108cfm HSP-Fans, it runs quiet. Love this rig now.

First, let me share my build and the load I am stressing my pc on. Also, these bad temps reading are with absolutely no OC whatsoever. This is all out-of-box.

While it is good that you dialed down the core voltage, 74C is no problem for your CPU and nothing to worry about.

Are the two water coolers on the GPUs AIO units or custom? Great design, by the way! Looks like it was a factory system with everything so "together" as they say.
Last edited: Apr 4, 2016

Are the two water coolers on the GPUs AIO units or custom? Great design, by the way! Looks like it was a factory system with everything so "together" as they say.
Click to expand...

Okay, thanks. Missed that little detail about the hybrid.

DaveB isn't the OP, nor does he have 980Ti Hybrids.

Put the keyboard down and slowly step away from this thread.

So, outside of those two cards, and the overpriced (but sweet looking) ram, not much more than most.

Oops! Thanks for the name alert, ED. I edited those posts.

Also, the two 980 Ti hybrids (great card by the way!) are venting their hot air into the case. The CPU cooler is pulling this hot air into its radiator to cool...so the CPU temps will be higher than they should be.

I have a 980 Ti hybrid, and it puts out air through the radiator at a pretty warm temperature when running.

If you want lower temperatures, you'll have to be venting the hot air from the 980 Ti hybrids out of the case, not into the case. It looks like you have room above your motherboard to mount the 980 Ti hybrid radiators as exhaust.

I tried different fan combinations on my 980 Ti hybrid, and found that the original fan supplied with the card in the factory suggested "push" mode gave the best results. There was very little gain with a push/pull setup.

Again like I've said before in other threads Skylake needs significant voltage increases past 4.7-4.8. Your Corsair H80i V2 is not up to the task.
You must log in or register to reply here.

Suggestions for my recent problems with my 5950X
2