I just had to give the dog a bone if you know what I mean
Click to expand...

If this means setting it up properly, coolio!


Just for reference, I last said this in your closed thread at TPU (RE: the cooler):

I wasn't quite where other people were!

EarthDog said:
If this means setting it up properly, coolio!


Just for reference, I last said this in your closed thread at TPU (RE: the cooler):

I wasn't quite where other people were!

The performance of the cooler was never in question. Everyone knew it wasn't up to par with some of the more high end air coolers, it was chosen for aesthetics. At the very beginning of the thread I also set the expectation that if it was NOT suitable for my build in holding temps, I would upgrade to something better. And that option is still on the table.

As noted, and despite the coolers shortcomings I called 5.0GHz feasible from day one and that's exactly what I achieved

The only reason I lost was because my RX580 scored in the 96th percentile, so I could easily achieve #1 rank in performance out of literally hundreds of computers with similar hardware.

In case you forgot, there was only one computer that benched higher than mine at userbenchmark. So the rig was put together beautifully and had to be "set up" properly to achieve results like this.

I know, I know, people that don't like userbenchmark.com but never the less, it's a great tool for comparison, to say the least. And there are plenty of overclocked rigs on userbenchmark as well. Most people that

tweak and tune their PC like to run benchmarks. Average people with no interest in performance typically don't have the inclination to bench their machine.
OP 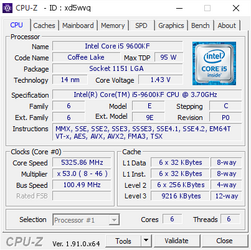 Well what do you know? My 9600KF holds the national record for highest clock frequency in the United States according to HWBOT.org... and 3rd overall, globally, according to CPUz submissions.

Granted, the sample size isn't that big... but still, I think I'll take it 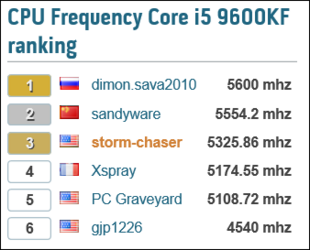 All done with 'ultra low performing' MSI Core Frozr XL 120mm
You must log in or register to reply here.