This fits my budget. It looks like I can fit 2 GPU's and the third would be blocked. I do not see any that could fit 3 GPU's. Looking for any other recommendations. I have liked my MSI, GIG ,ASUS and Asrock mobo's in the past.Have no real feeling one way or another .

Any suggestions welcome. AIO cooler that will fit is needed.

Is it going to matter what MOBO I choose? Or can I just go by price. I would like to run 3 GPU's if possible.
W

I think that soon you will see that MSI review on the front page (or DDR4 version). I will test ASRock Extreme (which is about the same as Steel Legend) in a couple of days but it will take some more time until I actually share some info so I bet you already buy something.

Some motherboards have DDR4 and DDR5 versions. DDR5 will be a bit faster but nothing really significant (it may change when much faster kits appear on the market). Considering your linked RAM, you want a DDR4 version of the mobo so the MSI in the first link won't work. There is the same mobo with DDR4 in the product name -> https://www.newegg.com/p/N82E168131...-a ddr4-_-13-144-489-_-Product&quicklink=true

Regarding AIO, pick the one with the LGA1700 mounting kit. This seems obvious but some AIO don't need a new mounting kit and there is an update on manufacturer websites.

dfonda said:
This fits my budget. It looks like I can fit 2 GPU's and the third would be blocked. I do not see any that could fit 3 GPU's. Looking for any other recommendations. I have liked my MSI, GIG ,ASUS and Asrock mobo's in the past.Have no real feeling one way or another .

Any suggestions welcome. AIO cooler that will fit is needed.

Is it going to matter what MOBO I choose? Or can I just go by price. I would like to run 3 GPU's if possible.
Click to expand...

I just had that DDR5 board show up yesterday, first impression does what it should just fine with a 12900K. Haven't had much testing time with it yet using 2 x 32 GB Corsair DDR5 4400
Check that memory link, looks like you have DDR4 selected and that board is DDR5
OP

Thanks for noticing...No performance gains for the very expensive DDR 5 so I am staying away from that. I was going with the 2nd one as that does x4 on the second slot. I at least looked at one of them correctly in regards to RAM.

The RAM is correct the MOBO I linked to was the mistake.

These are almost strictly for fah

I have Plenty of PSU if I can just wedge in the GPU's.

Until there is a "Black Market" source for DDR5...

I ended up ordering this one.

I do not like my case but I'll use it anyway. Or cut up an old one I have to fit the long GPU's.

My Xmas present to myself...

Awesome! It's going to be a beast! Can't wait to see pics.
W

I just unpacked my Z690 Extreme. ASRock decided that since I live in Poland and they are not planning on releasing the WiFi 6E version in the EU then they will send me the version without WiFi. No big problem but it looks somehow poor without WiFi. I just dislike missing spots on the IO shield and other places.
Either way, the mobo itself looks simple but pretty good. I like that it doesn't look like a flashy toy. It's not much different than the Z590 which was working well. I have no idea what about BIOS but if I won't have any unexpected issues then I will check it in the next few days.
The price is pretty good for the specs. ASUS is highly overpriced, MSI also set higher than expected prices.
OP

If we were closer I would switch, I have everything wired at my house. I wish the Steel Legend had stayed in stock , it was plenty for what I'll use this for. Looking forward to hearing you thoughts W Mack. I'll be happy if the RAM just runs at stated XMP speed...

I was going to swap parts but I think I have enough to build the whole PC. I'll take a trip to MC this morning and maybe pickup new case. I like the review we have on the Lian Li .

Unfortunately I still use a DVD write/ripper every week for nefarious purposes...so it will have to keep sitting barebones on top of the case till I buy or build an enclosure...Maybe I'll look for one of those.

I guess you can get quite cheap USB DVDRW.

There were no problems with RAM support on last 2-3 ASRock generations so I don't think you will have any problems with your RAM at XMP or overclocked settings. ASRock has delays with Z690 mobos so you may only expect that the first BIOS won't be great. Actually, all brands have problems with that but ASRock doesn't have big BIOS team so it takes them a bit longer than other brands. My Gigabyte has problems with BIOS and there was no update for over 3 weeks.

I'm not a fan of WiFi and I have thick walls so there are always problems with signal in some rooms. I have 10GbE LAN at home. However, because of high prices of 10GbE devices, my main switch has only 4 ports. This is enough for tests and my gaming PC. Everything else is using WiFi.
I just don't get why motherboard series like the Extreme don't have WiFi. I mean WiFi modules in retail cost ~$30 so for manufacturers it's maybe ~$10 max. I wouldn't even care to release 2 different models.
OP

Picked up my case from MicroCenter....and they had an open box Optional USB-c 3.1 cable for the top. Should have come stock, took an hour to take it apart and add it in. The buttons fall out once its apart and a piece of tape was needed to hold them in place.

The case is sweet tho. A black version of the one I got for my SIL and Daughter. 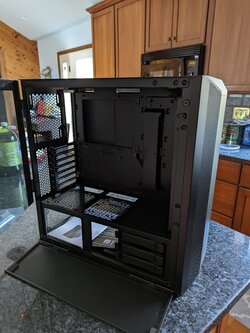 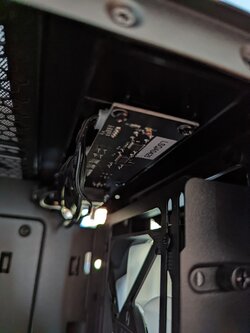 I'm looking forward to that Asrock Extreme review, and the PG ITX one from whoever reviews it first.

Some of those motherboards are bloody expensive even for a casual enthusiast. But being a whole new socket I can't deny the desire to get an LGA1700 to play with. I wonder how long until we get good DDR5-6400 options, and where the speeds will top out at.
W

Voodoo Rufus said:
I'm looking forward to that Asrock Extreme review, and the PG ITX one from whoever reviews it first.

Some of those motherboards are bloody expensive even for a casual enthusiast. But being a whole new socket I can't deny the desire to get an LGA1700 to play with. I wonder how long until we get good DDR5-6400 options, and where the speeds will top out at.
Click to expand...

ASRock/Gigabyte seems reasonable if we compare prices from the last generation. MSI and ASUS have ridiculous prices for their higher boards and there is nothing really new. I mean if they added some new controllers, faster LAN, or something else then maybe it wouldn't be so bad but there is nothing more than in Z590 boards that cost significantly less. I picked Gigabyte only because it looks somehow better than what ASUS or MSI has in their offer and the price of Aorus Master was ~30% lower than the ASUS Hero. Also, GB has 10Gb LAN and ASUS 2.5Gb. Almost the same is with higher MSI boards but MSI is a bit cheaper.

So far I see that the average Micron DDR5 will make 5400-5600 and nothing more. Samsung or Hynix will go past 6000 but there are almost no DDR5 kits on other IC than Micron in stores right now. When DDR5 will be more mature then manufacturers expect DDR5-8000 or a bit more in mass production. It means that the enthusiast, higher binned kits will reach DDR5-10000. If I'm right then it's the maximum memory ratio for current motherboards.

I had no time to test ASRock Extreme during the weekend so it's still in the box.

Buildzoid on Youtube pretty much trashed all of the Asrock options except for the PG ITX as too expensive or poorly featured in relation to comparable options from MSI. The Extreme was too expensive for what it had in his eyes.

I don't really follow him but he is known to trash some products that don't deserve that. Somehow audience likes that either it's fair or not. MSI mobos are recently pretty good but if you check prices then from the current generation, the reasonably priced are only lower DDR4 models. Lower but still give good OC results.

After the first quick tests, I can tell you that DDR4-4000 Gear 1 works without issues on the Extreme mobo. This is with 1.17 BIOS so the initial one. DDR4-4200 doesn't boot and there is nothing between. I wasn't really counting it will work at 4200 Gear 1 but wanted to check anyway. However, for some reason, I couldn't even boot at 4000 CL14. Maybe some wrong settings or just early BIOS, hard to say as I didn't spend much time with this mobo.
XMP at 4000 CL16 works without issues.

I also mentioned in another thread that the CPU voltage is significantly lower than on Biostar or Gigabyte motherboards. It causes that under full load, there is no throttling and even Noctua NH-U12A keeps all cores at ~4.9GHz in AVX tests. This is of course at auto but suggests that ASRock was working on BIOS some more than mentioned, other brands.
OP

UPS AKA Santa arrived today... Nothing too extreme(3200 RAM). Stuffed these in the case as I wait on a few other bits to arrive. I thought it was odd that this MOBO had an extra standoff hole...10 instead of the usual 9. I had to go dig one out as the case only came with 9. 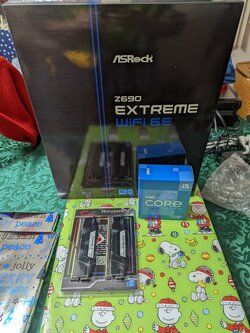 You don't really have to use the 10th hole, but I believe it just looks weird when something is missing Older motherboards had it more often.
OP

Oh for sure, I just have hundreds of them. Trying to nail down why I can't get the WIFI working...I guess driver. Its enabled by default in BIOS and I thought I installed every thing in AsRock support...have to look again. I don't want a cat 5 cable draped where I am working on it...Got an old GTX 560 Ti in it. i think that's an Intel WAN driver. Not sure why Windows update did not install it. EDIT: Yeah just a driver...At support I typed "Z690 Extreme" and needed to type "Z690 Extreme Wifi" The proper driver shows up then.

Had to hack a mount for the 1700. Sent an email to CM for the bracket but have not heard from them. I had a bracket from maybe a NZXT cooler...and it had holes far enough apart and made of plastic that I could bend and flex it to mount as the backplate. Anyway it booted right up and shows no sign of having bad CPU cooling so it must be making good contact.

Anyway if you have a good parts bin you can mount your cooler.