Hi first redirect me to right forum if I post it in wrong, first my spec, than the story.

In this thread there are specs of old build which doesnt crash https://www.overclockers.com/forums/showthread.php/799844-According-to-CPU-Z-Core-Voltage-is-not-stable-even-if-it-is-forced-in-BIOS

With this new build I fight for 5 months - the RAM was tested by mem86 - looks good. So what it does - when playing games the PC suddenly restart - I was watching temperatures it happens when the GPU reach about 70 C, also test it with another GPU with the same result.

So one important question is: When I study all stuff about my new PC I maybe came across about information that in this config, CPU is controling the PCI-E (but I study it a lot and I am not sure If I get it right, thats why I ame asking here) - so is it right the PCI-E 3.0 is controled by CPU and not by chipset?

Seriously I probably give up and buy MB and CPU from another company again, what are they doing (no possibilty to test CPU) is not even really silly excuse, but is also against the law (I dont have to give them all accessories). So after hours of disassembly the new one and assembly the old one I am at the same point as before reclamation.

So one important question is: When I study all stuff about my new PC I maybe came across about information that in this config, CPU is controling the PCI-E (but I study it a lot and I am not sure If I get it right, thats why I ame asking here) - so is it right the PCI-E 3.0 is controled by CPU and not by chipset?
Click to expand...

This depends. If you're talking about the PCIe slots for the video card, yes those lanes are attached through the CPU. You can see this in the manual as well (a chipset diagram) that shows the breakdown. The other slots connect through the chipset.

Sudden restarts scream power supply to me. How old is that CX750? CX line is very cheap and not of high quality. If you used it on your old build, that may be the issue. Lowering to PCIe 2.0 from 3.0 slows the GPU down and will use less power. 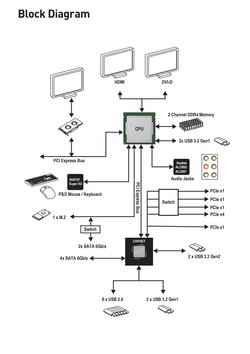 Thx for diagram - yes I mean PCIe for graphics card. And the PSU? Let me check, this is going to be very old one......., got it 2017, "CX line is very cheap" I dont question your obviously better experience, but it is most expensive PSU I ever bought

Thx for answer, this is going to be first time after 20 years when I probably rather put it into service. I dont have other parts as before to test it (all is AM3 and lower).

Hmm do you think that some PSU calculator will help? I wonder (when old one is stable) the difference of eating power comparing old vs new - is it that big?

It's only 4 years old, but it is considered a 'budget/low quality' power supply. I don't know if that's the issue, but if it's powering off under load, I'd look there first.

When you upgraded, did you reinstall Windows? That's something I would do...

A PSU calculator won't help, no. 750W is plenty to power the system... I just think there may be something wrong with the power supply. Your current system uses more power, but I wouldn't imagine by much.
OP
S

Hm I can probably test another PSU , I just need to look deep into the boxes , I keep you posted. And yes, I reinstall the windows (and being so lucky to remember to extract SN before upgrade )

I edited... did you reinstall windows when you upgraded?
OP
S

Hi, I think the result is bad PSU. I assembly again all new parts, plug only neccessary hardware, did a fresh install of Win. I was partly lucky, bcs this time the computer didnt restart under heavy load, but first I was still getting BSOD even when I was doing nothing. So because I start diging again I try to switch the power cable. BSOD is now gone. But under heavy load (tested on Project Cars 1), even when I plug cable in single electronic plug, the PC restarts after few minutes. But still the suspision of that it could be CPU remains bcs as I checked the load before crash throught OCCT, GPU was only on 50 % and CPU on max. I check my boxes and I dont have any other PSU on which I can test it. I can dissambly the PSU and clean it, but I dont think it will help. Any recommendation for PSU?

Just one note - after the MB came back from reclamation technic states - test it, no problems. But before, right when I bought the MB I was wondering - the PC was booting up maybe longer than win , I check the so called EZ leds and it everytime blink on every component error and than it continues, thats why booting was so long. Now it blinks only "bad cpu" and quickly continue, so now it according to my standarts starts in common fast way. So I wonder, did the technic flash the bios? One company advice me to reflash the BIOS unfortunetly m-flash doesnt work for me - yeah there are workarounds, but if it is PSU I dont want to accidently destroy the MB bcs of bad bios flash.

Ok I think thats all, this was the longest run in my life to repair my PC (and I hope it will end completely with new PSU)

New PSU, reflash BIOS, still the same, still testing and hope that I figure it out, bcs I dont want to deal with that company again and if it is CPU I am wasting my time
OP
S

I know, that by the title this possibly doesnt help somebody (especially overclockers ), but its finally ok - I bought the cheapest MB to test and everything is fine, that great company told me that my certanly (now) broken MB from MSI is OK, I dont know should I be glad that I solve it or go to find a stone and throw it throught the window of the company (you can delete it if you find it radical, but after about 2 months... ).
You must log in or register to reply here.

Advice on my new build
2