Is there an app to shut down iPad?

Not a timer, I mean an actual widget button you simply press to shut down iPad, just like there are widgets to shut down / reboot Androids.
The press & hold of the rough physical iPad button followed by a slider seems to be there to discourage you to shut this thing off.

Yea, but then you wouldn't burn your battery up faster and have to replace the device.

I don't know of one, though my 1 year old seems to have an instinctive knowledge of the power off button for every device (especially my work laptop...), so I'll stick with the complicated method hehe

Maybe you can place a shell script on your home screen? Is your iPad jail broken?
OP

Ipad is school property, they give them to kids nowadays. There is definitely a need to shut it off completely at times...

Apple absolutely went out of their way to discourage shut downs.


Do they not have an equivalent of a Google Play store? Is there no place where people offer useful Apple-equivalent apps we have on Android? In the entire (large) world of Apple users, no one ever had a need for a simple shut down button? To save their battery, for all kinds of reasons, this did not dawn on anyone in the entire Apple world?

Can one of us assign an apple shut down command to this picture and offer it to Apple people? And if we can, are you saying there will be no one over there who would be interested? Millions of installs (seven digits) on Android devices of just one single app to shut down Android with a single tap and not a single person ever had a need for that in the Apple world? And it's ten times harder to shut down an Apple product than an Android product?!? Wow. 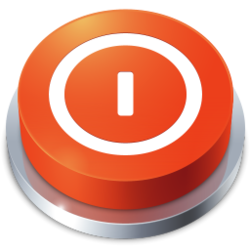 Yea, they have an app store. It'll only cost you $1000 a year and you'll have to go through a grueling review process

The only way I am seeing to power off via the touchscreen is with Assistive Touch turned on. It does not appear to simplify the process, however.
OP

Ha, I've never been there, but a thousand bones, every year no less, do they even have free apps over there? Does Google charge for their free store apps?

So you'll have to sell a thousand of these at 99 cents a pop to not make even on just the posting fee? So what's the deal, I'm sure it must have occurred to someone, what's the down side here, other than losing a grand if no one is interested? I mean it makes me want to do it, but I have been blissfully unaware about anything over there, never used any of their products, ever... so what's the down side?

The "app" would basically not do anything other than place an icon on the screen that shuts OFF the damn thing when you tap it. That's it. What's the down side, you can't get a thousand people to fork over a dollar? How about two thousand to part with fiddy cents? Or is there more to this?

Do you have a terminal emulator? "sudo shutdown -h now"
OP

I don't have an iPad. My kid uses it for school. My 100% only interaction with it is to shut it OFF.

It is physically awkward to hold that rough iPad button then wait for the slider to finally shut it OFF.
I have never successfully done this on a first try. It takes me SEVERAL tries to shut the thing off. Each times it happens, I... let's just stop there because this is irrelevant... I just can't believe people put up with this, that there aren't any threads on this when you do a search.


So the iPad has whatever the elementary school put on it, how do I place an icon on the screen that can shut off the device when tapped. Nothing more - nothing less.

$1000 is just a number I heard/saw several years ago. It might be completely inaccurate. The biggest difference, which I know of, is the more stringent review process for Apple's store compared to Android. I would assume, if someone hasn't produced such an app by now, it must be prevented in some way (maybe Apple doesn't allow apps to mess with power cmds?).

iPhones/iPads have a few good things going for them which have me roped in, but you do give up a ton of flexibility vs. Android. And, yes, most of the "good apps" for Apple are paid. When I switched from Android, for example, I had been using a great password storage app for a long time for free. To find something equally-featured on my iphone, I had to shell out $10 (and that was one of the cheaper options...).

I guess all that is worth Facetime? lol

Everything I read about it says to shutdown only as a last resort. They want your device on 24/7. Fairly certain, if you do your research, this can be accomplished with a shell script. Put it on the home page, and apply an icon to it. Only thing is if the school set up administrative rights, you won't be able to pipe an empty string in for sudo password..... I believe... Not an apple guy so I don't know first hand....

Have you considered getting a smart cover/case that will put the ipad to sleep when its closed? I would think the school would provide one.

It's possible that apple doesn't give permissions to the power settings to normal app developers in that the only option is to jailbreak your device to give you the option. Back when I had an iphone 3g years ago I had a button in a pull down bar.
OP

With this thing being in sleep mode, you still get sounds and battery wears out.
I simple switch OFF is all I'm after.
You must log in or register to reply here.

T
So when CPUs overheat and shut down...
2