Just throwing this out there...

When I started looking to convert my air-cooled rig to water cooling in my Phanteks Enthoo Pro case I wanted to make use of both of the windows in the side panel. How to use the larger of the windows was obvious but the smaller window was less so as it, as shipped, only looks on to an interal plate that is part of the structure that holds the bays and cages. I knew that I wanted to retain most of that structure so I was left with the problem of how to utilise a space which was only just over 30mm deep. I decided it would be cool to have the res visible through the window but couldn't find anything off the shelf to fit the space so I decided I needed a custom solution.

It was a bit of a leap of faith given that this was my first ever water loop build and I wasn't 100% sure what I had to take care of other than understanding that I wanted to have:
1/ The res feed and prime the pump through gravity (before the pump starts pumping)
2/ Some separation between the inlet and the outlet so that any air in the system had a chance to bleed out before being recirculated
3/ A couple of ports at the top to allow the system to be filled/topped up (one for coolant in and the other to let air out)

Anyway I jumped in and drew up a design that I then had manufactured at a local plastics company who knew nothing of water cooling PC's but do a lot of custom work making displays etc.

This post is simply to share the design and show what it looks like installed (which required a slot be cut in the panel behind it to hook it into the loop)...

Design drawings (all dimensions in mm): 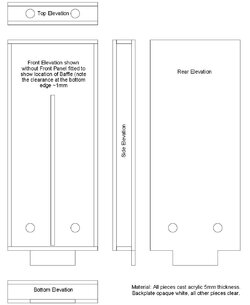 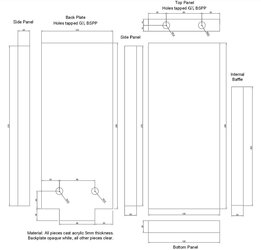 Installed and filled in the case: 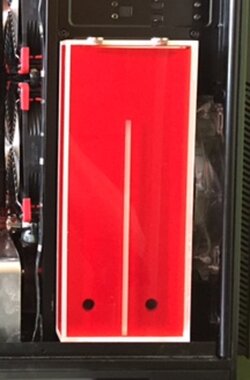 Some other small detail:
- The only things holding the res in place is the structure of the res itself slotting into the case, the connections to the loop and a small bit of velcro behind the res at the top.
- Res holds just under 0.6ltr of coolant (based on how hard it is to boil an ocean I figured no harm in going large!)
- Aside from cutting a slot for the connections to the loop I also removed the Phantek badge which was mounted there and fitted that to the front panel instead.
Last edited: Apr 19, 2016

I originally thought you were looking for some advise while doing some research for you as I recalled some of the past mods that were nicely done on the Primo line but once I finished reading your post, it came out very cool.

Here is a member a couple of years ago that did a mod to fit this res.

Always have seen those kind of bullet/billet/ball? reservoirs in the past and always wanted one. lol I have a extra XSPC dual bay reservoir that emulates one of those reservoirs with a plate in front of the "ball". When they light up they look really nice.

Regardless, you did a fine job and has filled the void that was once there.
You must log in or register to reply here.