Well, after lapping my HS, I've had this nagging little voice in my head telling me to do the same from the CPU. I did the job with 800 grit sandpaper. Initially, I told myself I'd just buff what's there right now just to see if it's level. After about 30 laps in one direction and 30 in the other direction I discovered I had quite a concave IHS. So I just kept at it. Two 9x11 pieces of 800 grit later paper later I was left with a darn flat layer of copper looking back at me. I finished the job and put a mild shine on it with a sheet of 1000 grit I got from the local auto parts store just for the f*ck of it.

Here are a few pics and the temp. results I got from lapping both my CPU and HS. I would recommend that anyone wanting the best $20 decrease in temps should consider lapping both the CPU and HS.

Each temp. point represents an average of data collected over approx. 1 h time period during the 2nd pass of a 2-pass x264 encode of a 720x480 DVD source using a high quality video profile. Data points were logged by Speedfan every 3-4 seconds over this time period. The average CPU usage was >99 % on all 4 cores throughout the experiments. Also room temp was between 20-22 °C.

This is my preferred setup: 8x10 piece of glass on a flat counter top. You can see I cut the sandpaper into a thin strip (about 2-3x the width of the CPU) and attached it to the glass with some tape. The glass is in turn tapped down to the counter top to keep everything immobilized. You'll want to moisten the sandpaper with some mildly soapy water (like 1 drop of dish soap in 1 liter of water), then blot it until you have no pools of water. Remember, if you get water into your chip you're sunk. Then simple hold the chip and gently move it front-to-back. I don't recommend doing circles since they tend to give uneven results. The copper color on the sandpaper is material I just removed from the IHS on the chip.

Remember, you're after a flat chip here so don't push down on it as you lap: let the weight of your hands do it without extra pressure and go slowly so you don't use uneven pressure. After about 30 laps front-to-back, I gently blotted off the chip with a moist paper towel to remove the metal particles I just sanded off, then rotated it 90 degrees and repeated 30 laps front-to-back. Then you'll want to clean off the sand paper (add more water, then blot it damp and repeat). I'd recommend changing the sand paper frequently since it's really doing the work for you. That's basically it. You can start with 400 grit or so and lap until you can't see variations in the surface of the chip (no silver color is often a good indication that you're flat), move up to 600 or 800, then finish off with 1000 or 1200. I did mine entirely with 800 and 1000, it just takes longer with finer grits. Remember, the key is FLAT, not shiny. I would recommend that you do NOT polish the chip with a metal polish since you'll leave behind a residue that will hurt your heat transfer.

You can test the flatness at any point during the lapping process by carefully placing a razor blade across the surface of he chip and looking at the area where the razor meets the chip. Now position your eye so that you're level with the chip and pointing at a light source (a lamp will do nicely). Do you see any light coming though? If so, keep at it. Another test you can do is to take a black sharpie marker and make about 9 dots in a 3x3 grid on the surface of the IHS. Lap about 5 times, rotate, and do 5 more. Now look at the dots... did they wear off evenly? If not, keep at it. You can also simply draw an "X" from corner to corner on the chip and do this as well. Again, you'll looking for even wear.

After about 5 minutes of lapping in each direction with 800 grit. You can see how the nickel plating has come off around the edges first which shows you just how concave this thing really was:

After more lapping most of the nickel plating has been removed expect in the really low areas (the camera flash fired so close to the chip makes all the scratches show up much more so than they do under normal light):

Another angle shows the nice dull reflection, still very so slightly concave at the extreme edges, but good enough for me:

I would recommend that anyone wanting the best $20 decrease in temps should consider lapping both the CPU and HS.

Oh, I also thought I'd mention that before I lapped the chip, I had a pretty big difference in core temps when loading with prime95 or 2x orthos: up to 6 degrees C (sorry I don't have a screenshot of this). Lapping the chip REALLY evened-them-out as you can see from the coretemp numbers after the IHS and base of the heatsink were lapped (stressed using prime95 v25.3):

The table I showed above was not based on prime95 or orthos, it was based on x264.exe which is a video encoder. It is good at using all 4 cores, but not as efficient as prime95/orthos which explains the differences in temps from that table.
Last edited: Nov 30, 2007

What's Intel thinking making those IHS so concave on a 125W chip?

How the heck can you cool one decently with too thick of TIM in the hottest part of the chip?

Location
in a magical field

It's probably the way it's manufactured. They must apply some pressure during the IHs application when the cores get bonded to the IHS. (look for pics of 'naked' C2Ds - they all end up getting ruined) You'd think they could pre-fab the IHSes to account for this but maybe at the final bonding the differences from chip to chip aren't predictable enough. I suspect the bonding is worth more temp-wise than any uneven-ness in the IHS, plus Intel is only really worried about stock settings.

Looks like it was worth about 5-8C drops, comparing the non-cured temps, nice lapjob Did you do the lapping in circles, figure 8s, or straight lines?
OP
G

Audioaficionado said:
How the heck can you cool one decently with too thick of TIM in the hottest part of the chip?
Click to expand...

@MM007- I did lines (front-to-back-to-front); circles and 8's can introduce uneven surfaces more easily due to the angular nature of the strokes. I'm not saying you can't do them, just that it's more difficult.
Last edited: Jun 12, 2007
P

well if you don't go in a straight line, figure 8, or a circle, wtf do you do? lol
OP
G

PearlJammzz said:
well if you don't go in a straight line, figure 8, or a circle, wtf do you do? lol
Click to expand...

Sorry man, chalk that up to poor wording on my part. I just edited the post. 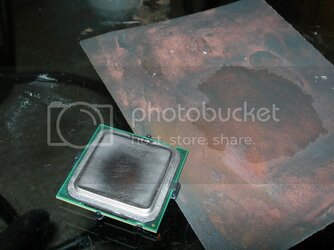 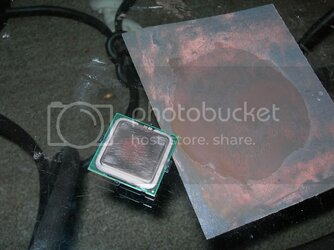 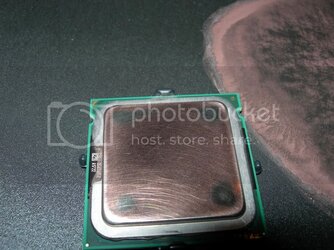 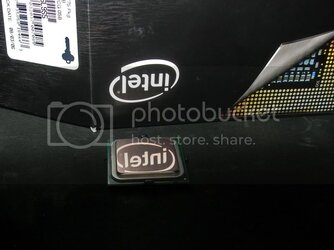 ohhh shiny . I have never lapped before but am going to do it first on my HS, then I'll try it on my Q6600. Is there rlly anything that I can mess up?

I don't know how any of you can rub sandpaper on a $800 piece of computer equipment.
OP
G

Nice job on that dude... did you happen to go some before/after temps you can share w/ the group?
OP
G

PearlJammzz said:
ohhh shiny . I have never lapped before but am going to do it first on my HS, then I'll try it on my Q6600. Is there rlly anything that I can mess up?
Click to expand...

I'm sure you'll do just fine. Just take your time and don't use much pressure at all; let the sandpaper and gravity do the work. Remember FLAT is what you're aiming for when lapping. Take some pics as you're doing it and also get some temps before/after (make sure you make not of the room temp).


Hazaro said:
I don't know how any of you can rub sandpaper on a $800 piece of computer equipment.
Click to expand...

Technically, you rub the $800 piece of computer equipment on the sandpaper

Do you use anything to hold the cpu while lapping, or just use your fingers?

Do you need to cover the non ihs side with anything to stop fine particles getting on the cpu pins/dots whatever?

I would strongly suggest that you wear a ESD wrist strap while grinding to drain off any ESD static charges from the sand paper. Even if the paper is wet, it could build up a charge unless it was grounded.

graysky said:
Nice job on that dude... did you happen to go some before/after temps you can share w/ the group?
Click to expand...

Phrenetical said:
Do you use anything to hold the cpu while lapping, or just use your fingers?

Do you need to cover the non ihs side with anything to stop fine particles getting on the cpu pins/dots whatever?
Click to expand...

I didn't cover mine. These particles you're talking about are trapped in the moisture you use to lubricate the sandpaper. I suppose you can use some masking tape if you're worried.

Location
in a magical field

I just use the little black plastic cover that comes with the CPU. It's not a bad idea to q-tip the backside with rubbing alcohol after lapping as well. LGA775s are soooo much easier to lap than socket types that have pins.

Damn thats some good results. Better than what I've gotten on any of my 3 CPU's that I've tried lapping.
OP
G

deathman20 said:
Damn thats some good results. Better than what I've gotten on any of my 3 CPU's that I've tried lapping.
Click to expand...

I think this IHS was pretty bad actually. It took quiet a few strips of 800 grit to get all the nickel off it/make it flat.
B

The only real downer to this mod is the loss of waranty. I hit my E6600 the other day, but I dont think I did a good enough job, whenever i get around to getting a new case, or my blisters go away from removing and reinstalling water blocks all weekend heal ill yank it out again and work on it some more. These things are definitely not flat, its a shame you cant just pop the top like my old opteron.
You must log in or register to reply here.

C
high temps on stress, normal without it on 12700K