Overclockers is supported by our readers. When you click a link to make a purchase, we may earn a commission. Learn More.
OP
S 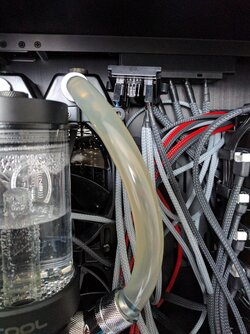 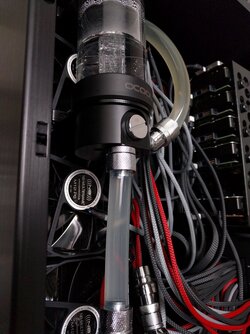 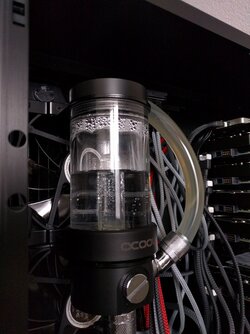 Any ideas as to how this happened?
OP
S

I only enabled TPU II in the UEFI, then ran prime95 (max heat) and furmark at the same time.

Didn't further OC the gpu, just copied the settings I last used on my old build.

Guess there's some room to reduce the voltage on the GPU, that would also reduce the temps significantly.
OP
S


I guess I'm lucky with the outcome of my delidding and the temperatures I can achieve, but not so much with the performance of my CPU..

I'm sorry you didn't get the outcome you were hoping for. In reality 4.6Hhz and 4.8Ghz will have little difference in real world applications unless you are doing video encoding or something else to that effect.
OP
S

Performance.. not sure I'll ever notice any benefit anyways.. but I delidded it to do overclocking, not to gather "experience".. lol

YYMV but pretty sure that's over spec. IIRC Max safe voltage was 1.45v vCore so I wouldn't recommend it.

From what I'm reading Ryzen wont be a huge improvement from your 6700K right away so you might want to stay with what you have. Until we actually have CPU's to benchmark it's all speculation of course.
OP
S

Also, I'm an AMD kid, so I really hope for Ryzen to shine.


All things considered, let's assume the Skylake must last 2 years but I guess I'd rather not risk burning it earlier.
on page 112 it says here that the max operating voltage is 1.52V
http://www.intel.com/content/www/us...ktop-6th-gen-core-family-datasheet-vol-1.html

Sharangir said:
Yeah, but 8C/16T at 4.6GHz must beat 4/8 at 4.6GHz, no.. That would depend on the bench. For single thread operations core count means nothing. For multi thread obviously core count is boss (i.e. video encoding, some modern games). What has really been the the shining star for Intel for the last decade has been better instructions sets. These have allowed Intel to stay ahead of AMD and doing it with less cores and lower speeds. Once we get some CPU's in our hands we'll run multiple comparisons for the world to see. Until then who knows.

Also, I'm an AMD kid, so I really hope for Ryzen to shine. I was a long time AMD fan boi dating back to the T-bird era. It's just been hard to stay a fan recently. I'm REALLY hoping they hit Ryzen out of the park this time!


All things considered, let's assume the Skylake must last 2 years but I guess I'd rather not risk burning it earlier.
on page 112 it says here that the max operating voltage is 1.52V
http://www.intel.com/content/www/us...ktop-6th-gen-core-family-datasheet-vol-1.html
Based on this sheet you should be fine. I don't own a Skylake so haven't had to look it up.

Since the idle power consumption is 200W that way, I won't be trying anything like this.

At 4.6GHz and 1.30V I'm currently stable and it draws around 100W in idle (psu readout from corsair link)

500W sounds pretty standard for a lot of these rigs. As I mentioned before 4.6Ghz may not be what your goal was, but it's still a very capable clock and you will likely not notice any loss in performance.

EDIT: I'm looking forward to some full set-up pics. I just scanned through this build again and had forgotten how gorgeous that amp is.
OP
S

Thanks.. coming soon I hope.

Will send the ram in for rma this week and should get the pwm dimmer for the leds next week.
Also, the Tygon Norprene (to replace that sorry excuse for a tube in the rear chamber) should be here next week.
I'll hopefully get it all done in March..
OP
S

I also set the voltage to 1.30V with 4.6GHz, absolutely stable.
With the "balanced" mode in Win power settings the CPU will now also clock down to 800MHz when idling. However, the Voltage remains at 1.30V

Shuld get my LED pwm dimmer, the cable combs and the norprene tubing soon and be able to install all those things within the next two weeks (I'm off to go shredding some pow next week)
Will snap some final pics once that's done.

I soldered the LEDs and am quite happy with the outcome, considering it's my first time ever. 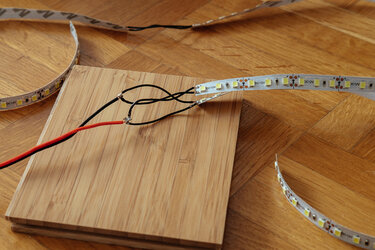 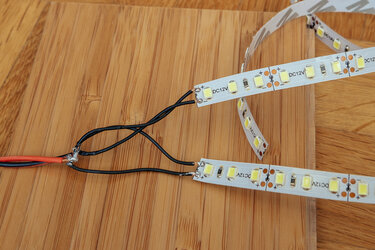 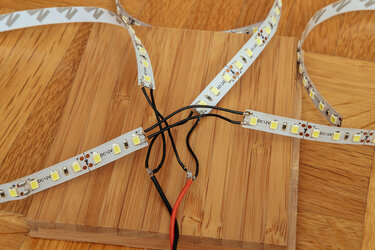 The main cable will get some sleeving too, as soon as I know the exact length I need to connect it to the pwm dimmer.
Using an old MOLEX cable with connectors already installed (since I don't have any spare ones to crimp my own cable )

The dimmer will be installed at the back of the case with the poti peeking out where the old dimmer for the Lian Li RGB LEDs was, so that I can regulate the brightness easily.


Once all that's done, I'll provide pics of the setup in use. (Including my desk, studio monitors, the tube amp, etc. )
OP
S

Done, done, and done
Got the RAM, tubing, LEDs and dimmer.

Only thing missing now are the cable combs, but I'm finally up and running and happily so.

Dimmer and LED's are connected for a test run 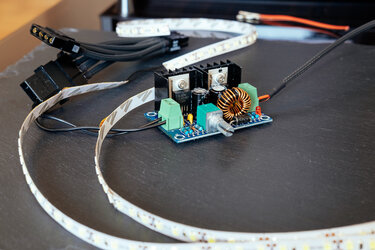 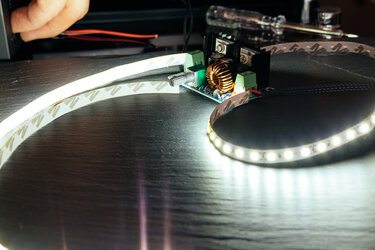 a little dimmer (no pun intended) 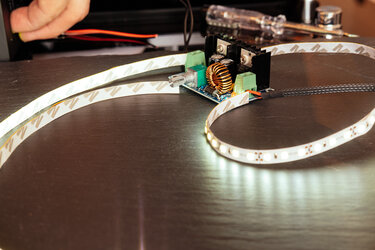 abused the RGB-control panels space to install the dimmer: 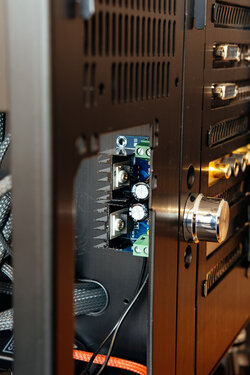 Then there was that.. I was told it's the UV light, but cannot be, since the little tube at the bottom was affected too and no UV reached there.. 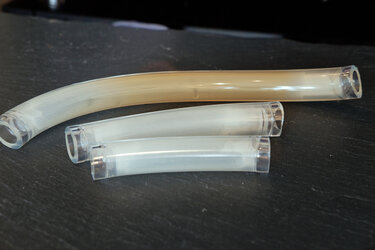 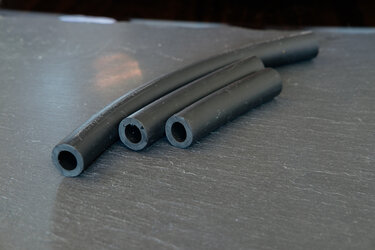 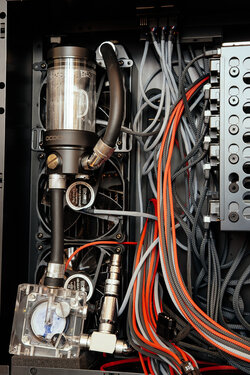 added some UV active (red fluorescent dye) to the water 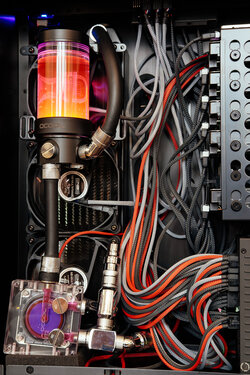 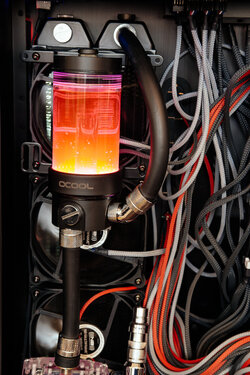 not perfectly happy with the cables, but I'm not gonna lose my mind over this, you can't even see them.. (okay, you can't see the red water with UV effect either, but I love that I know that it's there in secret ) 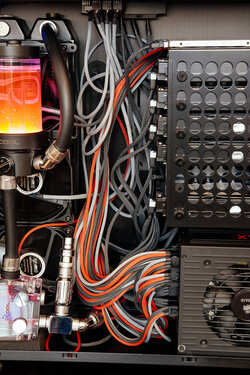 LED's in open case
too bright at full power 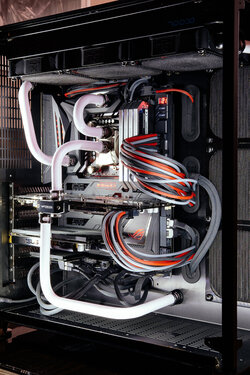 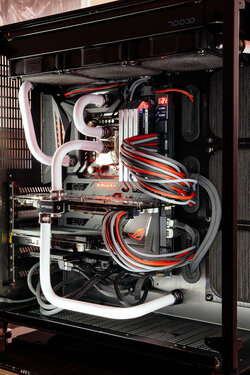 almost at the lowest level now 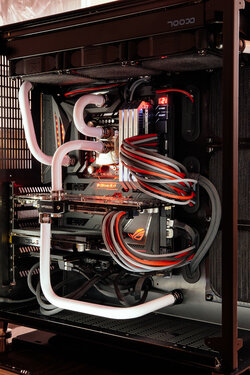 Now, with the windows on and on my desk 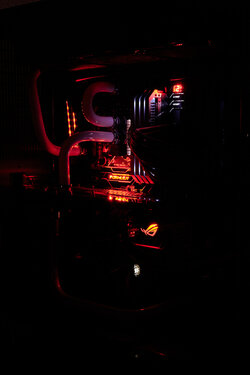 so glad I bought the dimmer.. would've been a pita with max brightness 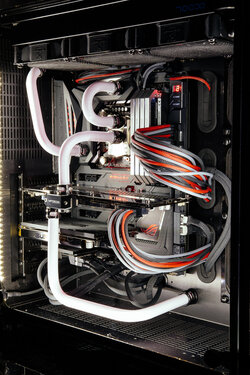 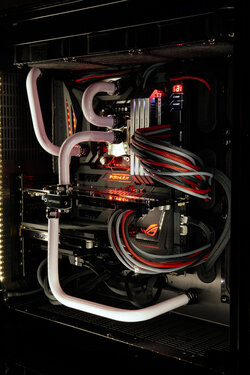 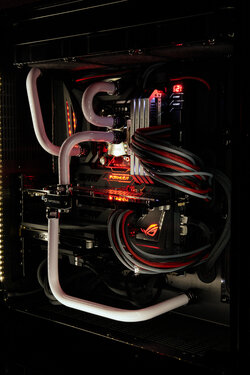 how I have it now: 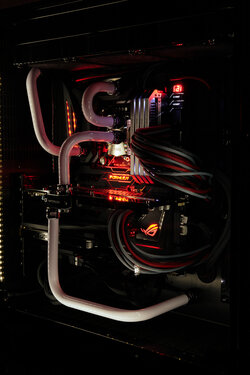 And the view on my desk right now:

white balance is weird, because the halogen desk lamp is much warmer than the LEDs, so I had to make a compromise with the white balance in the image.

Ask away, if you want to know something.
OP
S

Is there anyone left?

No feedback for me?

Lost the last 20 hours of my free time to Mass Effect: Andromeda.. (Damn, never thought I'd ever love a multi player implementation that much..need to get back to the story mode!)

It looks amazing Sharangir! I don't think I've ever seen lighting like your res before. Absolutely love it.
OP
S

Yeah, the res turned out amazing. I can see the glow when I look straight through the vertical rad
OP
S 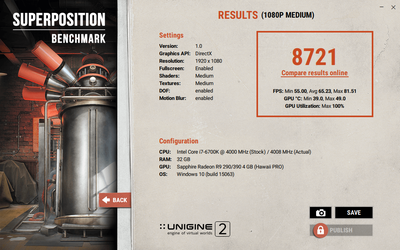 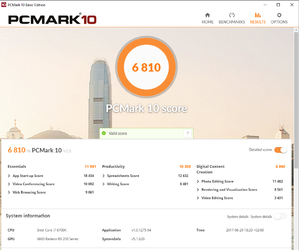 NZXT N7 B550 (Any alternatives with a white theme? With better performance/cost?