I'm thinking of doing a slight overhaul to my main computer/rig area by adding a 8port switch (Nighthawk S8000) to my existing Nighthawk R7000 WiFi Router. With that I could add some nice speed increases to my network as is and more reliability and help balance the load a little more (more ether, less wifi on heavy usage items). Since currently only have 4 ports that are being used by, PC, NAS and VOIP as musts connects, it really limits me with connections and only 1 floater which I had connected to a game console but the cable is shot now. It fell apart at one connector.

The Cables
That being said I should really start at my cables... and umm upgrade them. I've had some as far back as 2000 that I use. While they do connect and transport data still at 1gig speeds, its a little wishy washy sometimes and the cables are really not that great. Really I have no clue what to get, whats ideal, etc? Eventually might need cables that can do 50-100' no issues, though it will be in a totally different location of the house. So that being said I added a quick little sketch of my current layout in the basement. Everything else in the house (upstairs) is connected via 2.4Ghz and 5Ghz WiFi. With the things in the basement, if I can I will try to connect it via Ethernet Cable. Majority of stuff, 5'-10'. My PC is probably closer to 20-25'. TV/Console area is 40' give or take a little. So cable runs won't be super long but I don't want a mix of 1 type here and 1 type here. Just trying to keep things simple. Suggestions? 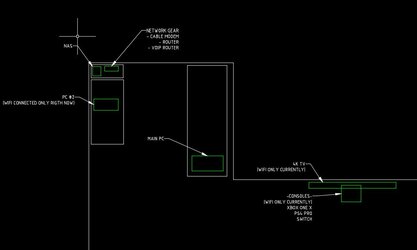 The Setup
Now dealing with the setup. Should I still use my WiFi router as my main gateway to the web? Have the VOIP and Switch hooked up to it + if I want something else connected to it? Would this be proper? Ideally My NAS (if I can) and future NAS box i plan on splicing 2x lan ports together to get better transferring rates between them (backups and such) so these would go on the switch. Probably the 2 PC's would also be on the switch. Suggestions with this that would be wonderful.

Check them out and see what you think.

For the setup, you won't see much difference whether you connect your gear to the switch or the router but... I connect my must haves directly to the router. This way, if the switch decides to be wonky for a day, my VOIP isn't bothered by it. The four ports on the back of your router are actually a switch. If both of your NAS's are on the same switch, they won't have to traverse to the other switch. So for example, if both NAS are on your 8 port switch, they can talk to each other without going to the router. If, however, one is on the switch and the other is on the router, both the switch and router will have to talk to each other to talk to both NAS. Similar, if both NAS are on the router, they will talk directly to each other. My personal preference would be to put them on your 8 port switch to keep them away from your router when they are going to town on data to each other. I would also put the PC(s) with the most transfer to the NAS on that same switch.

I'm not sure how you would splice 2x lan ports together. I think that your gear has to have load balancing built in somewhere but I'm not sure that I understand this portion of your proposed setup.
Last edited: Jun 25, 2018
OP

Don - Wasn't sure if there was any specific type or not for lan cable but that clears that up. As well for the connections on the router/switch clears that up and figured thats the way I'd run it but just wanted to confirm with others. Thanks,

Also couldn't think of the term before with the NAS and sharing 2 lan lines but its called Link Aggregation. For everyone its basically combining the speed of 2x 1Gb ports into 1 single 2Gb connection to the network. Way cheaper than getting 10Gb card and switch, and at least it improves speed since the system has the capability of it. Reason why I want to get it is if I'm doing large file transfers and someone is watching a video say, it can get a little crazy with the connection. Im sure I could set a QoS on the router a little better but, least this way I have over capacity in the line to/from the server so it won't stop the data.

Edit: BTW I like mono price for other cables in the past so good to know the network stuff is just as good.
OP

Oh and placed the order. Should be getting it Wednesday along with some other timely purchases. Just nabbed the switch tonight too
Network upgrade in progress.

Nice. I would set it up so that your heaviest traffic producers are wired to the same switch. I would avoid heavy traffic on the wireless as much as you can thus saving wireless for streaming and internet access. Intranet should be wired and grouped to the same switch as much as you can to avoid traffic jams. This of course assumes that you have extremely heavy traffic for long lengths of time but it won't hurt for short bursts of traffic either.

Good luck and have fun.
OP

Yup that is the plan. Both NAS's and PC's at very least will be on the Switch, as well probably the TV. The VOIP, Xbox and PS + the switch connection will be on the Router/WiFi box.
Amazing how quickly ports fill up with cables.

Oh I will have fun with this. Will push me to clean up my desk area and the crappy cable management I have and have a clearer understanding of everything going on. As well having a color coded system for the cables will be nice finally instead of a mix of stuff.
Last edited: Jun 26, 2018
You must log in or register to reply here.

Looking for a new router