I recently started using a Logitech MX Anywhere 3 wireless mouse using their tiny USB Unifying receiver. I immediately noticed the cursor would momentarily freeze and the extent to which it froze or stuttered varied with no obvious connection to anything else. Sometimes no problem, sometimes the mouse was unusable, but a problem at some level most of the time. I Googled the problem and found a ton of stuff going back a number of years referencing this exact problem with Logitech wireless devices but nothing I found proved helpful. A call to Logitech tech support got a woman in the Philippines with a heavy accent, scripted only knowledge, and chickens loudly clucking in the background (honestly - she verified she worked from home and the noise was indeed chickens). So, I threw in the towel last week and bought a hard wired Logitech M500 USB mouse. This mouse sucks because the two buttons on the left side are so incredibly sensitive I kept inadvertently jumping between browser pages. Coincident with this I stumbled on an article about RF interference and USB wireless devices and the light bulb suddenly lit.

I had the Logitech Unifying mouse plugged into a USB 2.0 port on the back of my machine in a port integral with the motherboard. I think it is very reasonable to assume any motherboard is an excellent source of a lot of RF radiation at multiple frequencies and a Fourier Transform wet dream of wave forms. The total energy emitted I believe is regulated by law and indeed very small but, relatively speaking, must be high right on the motherboard as is the location of the USB connectors that are part of the motherboard. I took a 36" high quality USB extension cable and relocated the Logitech Unifying receiver about 24" horizontally to the side of the computer. I am assuming this distance is enough to get the thing out of the RF noise "Near Field". The mouse now works perfectly with not even the slightest hint of a problem.

A lot of those bits back there are emi shielded on most boards. When I had a wireless mouse, I always put the receiver thing in a front port anyway. Never had an issue.

Relocating is a great idea.

I have this issue with the unifying receivers as well, especially at work, things like having a thumb drive plugged in next to it would cause it to do stuff like this as well. What i end up doing at work is get a 2' usb extension and run it up to the bottom of the desk or up behind the monitors, anywhere away from the chassis seems to help quite a bit.

Eh, I've been using an MX Revolution for the past few years that has the unifying receiver. Plugged into the back of the motherboard, with an open PC case and a metal desk between the mouse and receiver. Never had a problem.

Seriously doubt the problem is "too much interference".

I use the Logitech G110 and it has a USB port on the back to plug stuff in, I plug my unifying receiver for my Logitech M570 trackball with no problems. I do have 2 wireless mice where I had the receiver plugged in the back to the MB and had the same problems with stuttering years ago. 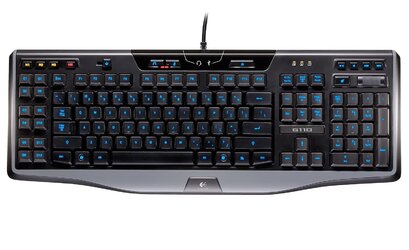 freakdiablo said:
... Seriously doubt the problem is "too much interference".
Click to expand...

This inspired me to do some experimenting.

First, I plugged the USB Unifying receiver back into the USB port it was previously connected to and the stuttering problem returned, just as before. (The extension cable also used this same port)

Second, I plugged the Unifying USB Unifying receiver back into the extension cable but placed the receiver flat against the motherboard back metal panel just adjacent to the USB port it was previously plugged into. The stuttering problem returned but only to a very minor degree.

Third, with the USB Unifying receiver still plugged into the extension cable, I let the receiver hang within a few inches from the back of the motherboard back panel and not a hint of stuttering.

Fourth, I purchased a 90 degree USB adapter plug and plugged this adapter into the USB port and the Unifying receiver into the adapter. Not a hint of a problem. I bought a 90 degree adapter only because I could not find a straight one for just extending the port out an inch or so away from the back panel.

The only hypothesis I can think of to explain this is RF noise originating from the mother board. The fact that RF energy decreases by the square of the distance, in my mind, lends credence to this because even a very small air gap significantly reduces the amount of RF energy (noise) seen by the Unifying receiver. I would be very interested in hearing any other explanation.
Last edited: Mar 3, 2021

Worth noting is the amount of interference each board emits is different. Depends on what the board uses...if/how it's shielded, among other things. So one person's experience may not be the same as others, for multiple reasons.
Last edited: Mar 3, 2021
OP
B

EarthDog said:
Worth noting is the amount of interference each board emits is different. Depends on what the board uses...if/how it's shielded, mong other things. So one person's experience may not be the same as others, for multiple reasons.
Click to expand...

After four days of using the Logitech MX Anywhere 3 wireless mouse with the Unifying receiver extended slightly away from USB 2.0 socket with the 90 degree adapter I described in Post #6 above (Fourth item), I noticed the stuttering problem was still a problem, albeit to only a very minor extent. So, I reinstalled the 24" extension cable and again placed the Unifying receiver about 18" horizontally offset from the back of the case. I feel a need to revise what I said above as the "Fourth" item in my post above is obviously not accurate.

In summary, no matter the reason, it strongly appears a Logitech Unifying receiver plugged directly into a back panel USB port has the potential to cause stuttering. The problem, when it occurs, can be significantly mitigated by extending the Unifying receiver even slightly away from the back panel and fully eliminated by moving it 12"-18" away from directly behind the case. It also appears the stuttering problem is more likely to occur with some motherboards and less likely with other motherboards.

Also, I connect a Logitech "MX Keys" wireless keyboard and the Logitech MX Anywhere 3 wireless mouse using a single Logitech Unifying wireless receiver. I only discussed the mouse stuttering problem because that so obviously effected the usability of the mouse. However, looking back, whatever caused the mouse stuttering problem was also effecting the keyboard. I was noticing letters would be missing after I typed something. I am a very fast two finger typer and just assumed it was my typing errors causing this. It is now clear that moving the Unifying receiver away from the back of the computer also made the missing letter problem disappear.

Back in 2014 when I built my first USB 3 pc (z97 era) I ran into this problem. Back then it was an easy google search (I know, there is no such thing anymore), but anyhow the work had been done to find the source of the problem.

As it turned out, the USB 3 ports themselves had so much current that the resulting em or rf or whatever field (cant remember what they referred to it as specifically) would cause this problem if plugged directly into them (or anywhere near them).

Subsequent research on my part discovered that if a USB 2 port was anywhere near certain chokes or VRMs etc.. on the motherboard, same problem.

The fix, as you have pointed out, is actually an extension to distance the transceiver from the rf "hotspot".

My family and I have been using wireless trackballs (thumb style) from logi ever since, and with few exceptions they always require an extension to prevent stutter/momentary drop out.
You must log in or register to reply here.

SOLVED Keyboard not showing up in Logitech G Hub (SOLVED)