Overclockers is supported by our readers. When you click a link to make a purchase, we may earn a commission. Learn More.
OP
A

NiHaoMike said:
The DSP is inside the fan motor. Look up "sensorless field oriented control" if you want to know more.
Click to expand...

and what about the one you have in sign? has it a built in DSP or it's different?

That's what it is. It's standard on all variable speed Delta and Nidec fans nowadays.

Note, however, that variable speed Sanyo fans (and presumably most other "cheap" variable speed fans) use a resolver and some analog electronics instead of a DSP, though the end result is similar.
OP
A

sorry for the inaction but I'm very busy at work nowadays..anyway, quick update:
I'm trying the option of the pwm controller (cutting and striping only the presumed pwm wires of the fans), but as I don't have time/tools for building my own diy pwm controller, I'm opting for the apparently only and unique commercial version of this stuff, the ZALMAN PWM MATE, but until now it has been very hard to find it, at least in Europe. N
ow I'm waiting for an order done on a Dutch web shop, and hoping..
OP
A

so I finally got the zalman pwm mate, but now I'm struggling with the connections , I'm using this review as reference, and thinking to
1 - plug the controller to the PSU for 12v,5v and ground
2 - plug the pwm from the controller to the fans (leaving untouched the other wires)
the only doubt I have is if the pwm signal itself requires a ground signal...

The fan just needs the PWM from the controller, GND is the same reference frame throughout the server, so you don't need a specific ground for the PWM pin.
OP
A

and here comes again my black hole about electronics..
I was just wondering if it's correct to send a 5v pwm from the PSU to fan, in case that 5v signal requires a ground that gets from the mainboard header...
I don't know if what i've written is understandable..

I don't think is that easy, because:
1 the system board has a 5pin proprietary plug, with a check wire(bridged to the fan ground)
2 every single fan need to be plugged to every single header (for speed and extra wire checks)
3 the pwm from the main board is reversed and I get no improvement if I drive it with the zalman

that's why I wanted to keep untouched the original circuitry and just plug the pwm, but still I'm not sure if that might cause some problem crossing 5v from PSU with ground from mobo.. 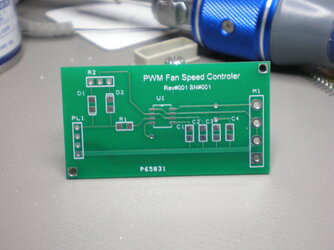 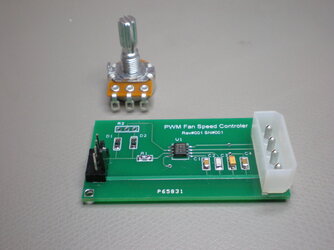 You'll have to pull the PWM pin out of the stock fan connector and connect that (and a GND from the PSU) to the Zalman thing.

Do not connect any 5V or 12V power wires to GND. Fireworks will result.
OP
A

ok, I've tried with the zalman interely plugged to the psu and one delta fan, result not as good as I was hoping but still acceptable, sending a pwm signal at 10/15% (actually 85/90% as it's inverted) I get a minimum speed around 1500rpm that's is not dead space silence but better than the jet turbine I had before.
next try (tomorrow) will be plugging the zalman to the server psu and sending only the pwm wire to the fan, leaving the 12v, speed, population check and (maybe?) ground wire of the fan plugged to the mobo header

That sounds about right. Silence you're not going to get out of a server fan, regardless of what some people may believe.
OP
A

today I realised I was worrying too much, I've disconnected the pwm pin of 1 fan from the server board, plugged the zalman pwm mate to the PSU and sent the pwm to the fan, and it worked great and nothing has blown up, so there's no need to plug a ground from the same power source of the pwm, probably a stupid thing for the most, but a big step for a noob..
anyway, the next step is to create the proper cabling, and I was also considering to
use only three of the fans (removing the redundant ones)
exploit the threes fan headers left free to power other fans placed in strategical points to compensate for the overall reduced airflow (like over ram and cpu heatsinks)
trick the system check up bridging the speed signal of the three deltas left to the "unpopulated" fan headers, so that the system doesn't complain at the startup when he wants to check the Max speed of the fans
a bit tricky, hope will work
OP
A

I apologize for the very late reply, I set aside all the server stuff for a while, but finally last week I had some time to spend on it, and tried to rebuild all the cabling again, in particular let's do a quick resume:
I. The server controls six fans
II. Every fan has got 5 wires: 1-Pwm, 2-Ground, 3-12V, 4-Population check (bridged to the ground wire) and 5-Speed.
III. If nothing is connected on any of the 4th and 5th wires, the system gives an error at the start-up.
IV. If I connect a different fan, the system detects that something is wrong and gives an error at the start-up.

So, I managed to connect only three of the original fans and control the speed via PWM with the Zalman PWM fan mate, in this way:

I. Cut off all the PWM wires from the server board, using the PWM from the Zalman (powered by a standard 4pin molex)
II. For the three active fans I have left the wiring intact (except for the PWM of course)
III. For the three unpopulated headers, I have: 1-cut off the 12v. 2-bridged speed, population check and ground to the corresponding ones on the active fans.

Result: the system thinks that all the fans are plugged and perfectly working, even if I keep the speed of the three plugged fan at minimum during the start-up (around 1500rpm roughly)!
I can even completely switch off the fans once I'm on windows (not recommended of course!).
Now I just have to refine it a little bit, I want to try and further reduce a little bit more the speed of the fans reducing the 12V signal, through some resistor or pot, and compensate for the overall reduced airflow putting a couple of 120mm fans above the rams (the hottest I have ever seen) and maybe 4 70mm fans on the cpus heatsink (not sure about it as it looks that they don't heat up much, it requires further testing)...
Last edited: Aug 24, 2014
OP
A

today I have found out that it's possible to further reduce the speed below 1500rpm, using both the pwm control and a resistor to reduce the voltage...the problem is that if I put a resistor bigger that 10 ohm the server gives me an error at the start up, and 10 ohm are almost useless as they reduce the min speed of just a few rpm, now I am trying to find a way to build a switch that allows me to bypass the 12v signal trough a cabling with some bigger resistors (ideally 30/40 ohms), so I can switch to a very low speed once I'm in windows

you can replace the resistor with a rheostat (get the biggest wattage of the rheostat, though).
this will give you a more convenient way to change the resistor value without having to swap out resistor.

need to mind you that the rheostat might got hot (probably way to hot so it might give away).
but on the bright side, you can determine what's the best resistor value to match your need, then replace it with the proper wattage resistor.
IMO, this will much be easier than dealing with calculating things that had tolerances

but I think you should consider WhitehawkEQ or Bobnova offer for the controller if you can't build one for yourself.
it works much better than anything else available in the market today
OP
A

inVain said:
need to mind you that the rheostat might got hot (probably way to hot so it might give away).
but on the bright side, you can determine what's the best resistor value to match your need, then replace it with the proper wattage resistor.
IMO, this will much be easier than dealing with calculating things that had tolerances
Click to expand...

It's a good idea, but now it's too late as I have bought so many resistors that I'll go with trial and error, even calculating is not very effective as the real current is quite different from the one printed on the fan (apart from the tolerance thing)


inVain said:
but I think you should consider WhitehawkEQ or Bobnova offer for the controller if you can't build one for yourself.
it works much better than anything else available in the market today
Click to expand...

If you are talking about the pwm controller, I have already solved that as I have bought a Zalman PWM fan mate, that works pretty good...but it's not enough!
V

Thank you for this post !
Because I have the same server and the same problem ...
To clarify mounting, here are a plan and some photos : 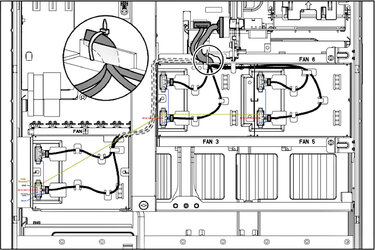 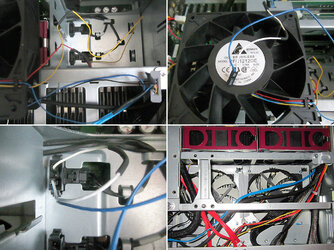 I'm sure i can supply 5V by this cable http://www.ebay.ie/itm/1m-USB-to-DC...633540?hash=item2c9adb70c4:g:G6QAAOSwEeFVTm2W from internal usb in the server.
Second thing, the fans that are in the server are: PFC0612DE http://partner.delta-corp.com/Products/FANUploads/Specification/PFC0612DE-F00(REV02).pdf From the specs i can read "The preferred operating point for the fan is 25kHz"
PWM generator i linked to earlier on has a range selection. Will this work if i select range between 1kHz - 100kHz?
If i have 5 fans to control, can i connect all of them to one PWM output?
JUst by looking on the picture, Where do i connect "GND from the generator" to? 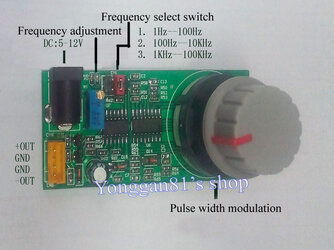 I have not tested but but normally it should work.


sayetan said:
Second thing, the fans that are in the server are: PFC0612DE http://partner.delta-corp.com/Products/FANUploads/Specification/PFC0612DE-F00(REV02).pdf From the specs i can read "The preferred operating point for the fan is 25kHz"
PWM generator i linked to earlier on has a range selection. Will this work if i select range between 1kHz - 100kHz?
Click to expand...


sayetan said:
If i have 5 fans to control, can i connect all of them to one PWM output?
JUst by looking on the picture, Where do i connect "GND from the generator" to?
Click to expand...

Yes but that the same signal for all fans.
I think it is not necessary to connect GND Out
You must log in or register to reply here.