Recently I gave Passmark a shot to benchmark my system. It also supports testing for memory read and write speeds as well as latency and it delivers comparison values for other systems. After the test I compared said memory values and had to realize that they were basically half of what similar memory was able to achieve. I'm sporting a single 8GB Crucial CT102464BA160B.C16 DDR3-1600 11-11-11-28 on an Asus M5A97 R2.0 mainboard with an AMD Phenom II X6 1090T BE CPU.

While this is certainly not high performance memory, being off by a factor of 2 seemed a little odd. Further research led me to the following two websites that listed the specs of this type of memory and other benchmarks of it, also done with Passmark:

The first link lists the following stats which are confirmed by the benchmark on the other link:

On my system I get the following values:

I've been going through the BIOS settings and everything's running at stock speeds, so I have no idea where this difference in performance is coming from. Another benchmark webpage showed values that were much closer to my own though, making things even more confusing.

I want to chalk it up to Passmark being an inaccurate test, but if the performance values of my memory are normal, how come Passmark could measure them correctly on my system, but not on countless others? There are too many discrepancies here. Does anyone have an explanation for this disparity? Is it my system, my RAM or Passmark? Are the performance values normal or unusually low?

If someone managed to get more performance out of this memory then I'd be thankful for some information. So far I pushed the timings to 9-10-10-24 while keeping the clock speed at 800MHz.

I remember reading something about Passmark not pulling the correct information from the memory...and it scored incorrectly.

Looks like these results are single channel vs dual channel. You should have about 5GB/s as I remember my old results and 8-10GB/s in dual channel. As Jr said, better check it in AIDA64. You can also take a look at MaxxMem or GeekBench where are many memory tests ( free is 32bit version but should be enough ).
OP
M

Thank you for the replies. Does dual channel really double the speed and halve the latency? That would be quite surprising.

By now I tested a few more benchmarks and the results seem to be operating system dependent. I'm running on Windows 10 x64 10525, but for testing purposes I also benchmarked my system in Windows 7. While most of Aida64's values were pretty stable, they were all over the place regarding L2 and L3 cache, showing similar discrepancies as I experienced with Passmark: 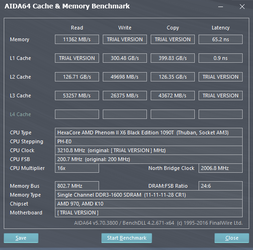 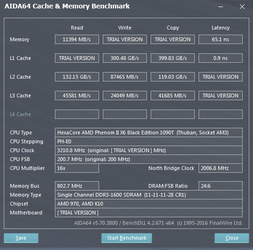 I also gave MaxxMem² a shot and realized that it sometimes measured the latency of my memory at 25ns while other times it jumped up into the mid 60s like the rest of the benchmarks. But this only happened on Windows 10. On Windows 7 the measured latency always stayed in the 60s: 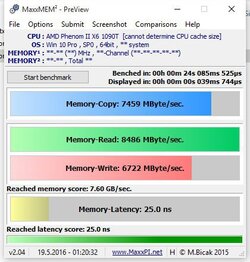 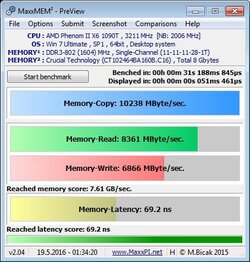 I'll give GeekBench a shot, but I have the feeling that I will see the same inconsistencies running it on Windows 10.
Last edited: May 19, 2016
W

Latency measuring in maxxmem isn't always working correctly. Don't look at that.
Latency in single and dual channel mode should be about the same. Bandwidth in dual channel will be up to 2x higher but depends from many factors so usually is maybe 70% higher.
OP
M

Thanks for the heads up. By now I also checked GeekBench, but the few memory values it delivered were just another set of new values not matching anything the other benchmarks spit out. It seems like there is no point taking those values too seriously and that comparing them among different programs is pretty much futile.
You must log in or register to reply here.