What is the new standard after M.2, will adaptors be needed for that?

If I have one M.2 internal drive and another mSATA Internal Solid State Drive, will they both go on this motherboard, or do I need adaptors for the second one... Does x4 mean I can fit four mSATA / M.2 drives mixed? 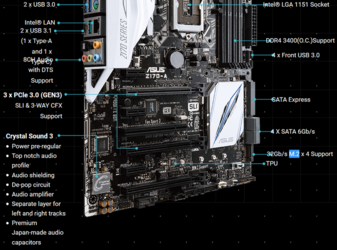 M.2 can use both a sata or pcie connection, first gen m.2 was sata only. Im not at home but if i recall right msata is a different conntor. If yours list x4 then it uses upto 4 pcie lanes, if the ssd is pcie based on the m.2 connector. Drives such as samny sm951,sm961 and 950 are pcie m.2 drives.

U.2 is what they are calling it for consumers but its actualky a type of sas connector that is i think the next gen m.2 for pcie based drives. You can find m.2 to u.2 adapters on newegg from asrock snd ithink asus as well.

I can post links when I get home. Hope this helps!
OP

Yes no hurry.
Thank you kindly, I need a primer for this, you are an excellent person to ask. Here is where I stand. I will wait for SM961, but before then I wanted to keep my current SSD in my old system and in the new system use something just to tie me over until SM961 arrives. To that end, I am considering a $19.99 purchase of this mSATA:
http://www.microcenter.com/product/460591/M550_64GB_mSATA_Internal_Solid_State_Drive
to fit into this M.2 motherboard:
https://www.asus.com/us/Motherboards/Z170-A/
Specific question #1: Do I need to buy anything else other than the drive, will it go into that motherboard out of the box? What connectors will it take up on that motherboard, one of the six SATAs? Or the separate connector on the picture where it says M.2 x 4.

Here you can see the physical difference.

what board is that?
saw the link.

you will need an m2 sata drive.
you will give up use of the sata express connecter.
OP

The board as pictured and linked to is an M.2 board. Of course I need am M.2 drive. I will get an M.2 drive. Until then I thought of getting the msata to tie me over and was asking about what I needed to make that happen.

c627627 said:
The board as pictured and linked to is an M.2 board. Of course I need am M.2 drive. I will get an M.2 drive. Until then I thought of getting the msata to tie me over and was asking about what I needed to make that happen.
Click to expand...

so you need an m2 to msata adaptor. lets go shopping.
ninja'd me!!

msata was developed for laptops since space is at a premium and you can find adapters for msata to other connections. if you havent bought it yet wait, but you want to look for a M.2 drive, SATA-express is still kinda new. i think there is maybe 2 drives out for that connection but they cost some money.

there is no need to wait on the SM961, it is an oem part like the SM951. newegg might carry the sm961 but i havent seen it yet, there was a article about the release of the sm961. at the time they where saying they could only find it on a .AU site. It could be a few more month but before some might be able to get it but expect to find the SM961 in thin-laptops or even pc-tablets.

might buy one of these u.2 adapters before they vanish, there use to be 3 manufactures at newegg now just one. Asus use to have one there as well as GB, not its just asrock.
http://www.newegg.com/Product/Product.aspx?Item=N82E16813998031
intels 750 line of ssd's you can choose the connection u.2 or m.2 since both are on PCIE buss it would matter which connection you get.

*edit*
do you really have no space you need to use msata? your just really paying more for smaller drive, why not just get a larger ssd-sata till you get your m.2 drive. i guess i should have asked before why use a msata drive in the first place, lol.
Last edited: Jul 9, 2016
OP

It appeared that the 961 was going to be a significant improvement over anything on the market now.
It appeared I should wait for 961 to arrive before spending more than a hundred dollars on a new SSD. Speed being more important than size for me.

Questions: Any difference between using the SSD like this vs. taking it out and directly connecting it my motherboard's m.2 port: 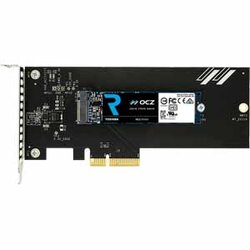 I have six other devices that need SATA connection. Will leaving it on allow me NOT to have to use a SATA port for it?

What is the cheapest way to get more SATA ports?
Do different SATA add-on cards have different speeds, what should I look out for...
Last edited: Jul 10, 2016

well current sata speeds are 6gbs or sata III so any card with sata III will do. the ssd will have the same performance weither in that card or plugged into the M.2 slot. since its what is call NVME it will use the pcie lanes so sata ports you dont have to worry about one of those connections being used. does the board you looking at not have enough connections? maybe another board with what you need + m.2 slot? if you get a board with more sata slots then what the PCH has then it will have another chip onboard for more ports. i guess it could go either way, you really need more then 6 sata ports?
OP

It all has to do with the fact that I would like to have as much data accessible from Windows XP internally when I reboot into it and WinXP limit is 2TB.
So I have three 2TB drives, taking half the slots.
Then I have a DVD drive and a Blu-ray drive, yes I use both simultaneously sometimes.
That leaves the sixth SATA for the SSD.

Now I would like to keep an old SSD in so that I can image from it to the OCZ RD400 M.2 but wait, that raises and interesting question...

Evilsizer, it was very kind of you to assemble all the links in this thread. They were of help to me as they will I'm sure be of help to anyone who hits this thread using forum search.

I have looked at the motherboards, all of which are selling at a hefty premium of $100-$200 or more from my planned system of Z-170A.
I have therefore decided to purchase this:
http://www.newegg.com/Product/Product.aspx?item=N82E16816124093
for $17.99 after coupon.
That card will effectively raise my available number of SATA ports to ten.

thats a nice find and not bad for the price, i wouldnt go hanging SSD's off the controller. i would stick the dvd/bd drives on it after you install windows ect, then you can get the speed from the pch for your ssd's. either that or see if you can find a x4 pcie card for a decent price, that way you wont be bw limited on the drives. this assumes though on the x1 card you are going to access all 4 drives on that card at the same time, in which case it will limit bw alot.

here is something about PCIE lane speeds that will help, it is a bit older but you should still get the jist of it. as there is not new pcie speed but they may be working on 4.0.
http://www.anandtech.com/show/2412/2

Consider that each port for you drives is 6gbps, that is less then a single pcie 3.0 x1 slot(@10gbps). on pcie 2.0 as your card says it can use, is x1 which is 5gbps total. now you have 4 drives on that one card with a 5gbps link and each ssd if your putting some on that card later is 6gbps/sata 3.
OP

Yes, the two optical drives would go on, freeing up two actual motherboard SATA slots.
That should not be a problem whatsoever, even if I am burning simultaneously on both, correct?

And now a separate question from this ↑
As a matter of fact, I don't need to but a useful question for you is what if this hard drive was placed on it: SATA/300 3Gb/s 5900 RPM drive and you are burning data from it onto the optical drives also connected to the card?

Would the two optical drives and a 3Gb/s 5900 RPM drive lose anything by being on that PCIe card, together?


I would not ever put SSD drives on the card, of course.

well more speaking about the card was under the thought you would be using SSD's. with the advancements on mechanical drives sustained data rates on a 7200/10k drive if both are maxing out you would have data rate issues with them. A slower drive like the 5400/5900 drives or older sataII drives, i dont think even if 4 in a sustained data rate, not burst would be much if any issue.

lets assume if your burning to both dvd/bd drives from your ssd and your moving files over to the 5.9k drive. i dont know the rate but lets say its 100mb/s for that 5.9k drive for a sustained transfer rate, that would still leave you with 150mb/s left to use. even if both burners can could transfer at 50mb/s while buring, you wont have any problems with bw issues on that add-in card, because in that situation you still have 50mb/s left to use before you hit the pcie limit of 250mb/s on x1.

Now internal transfer rate is another matter as in data being moved around to drives on that card, thats going to be what the controller can handle. that is something your going to need to test since each controller is going to be vastly different in how it does. Intel being ranked the highest and then down from there, seems mostly people are ok with Marvell and a few others. This also dives into something im not to up on, last i looked at higher end cards for xfer rates when talking ssd's is when Domnick did his 4 or 6 drive review/test for us around 2005(i could be off on my year).
OP

You've been such help and i thank you very much.

I see the card only handling optical drives on my system and that's it.
If I could do anything test-wise for anyone interested, just tell me how to test and I'll do it but I only intend to use the card for opticals.

the only way to test the controller would be to hook up as many sata III ssd's you have and transfer large file between them or if you could. im not really sure if it would be a large file on each drive then have each drive transfer that file to each other. like 1->2 and 2->1 etc or of there are other ways...
You must log in or register to reply here.