Okay so my last ATI (AMD?) card was a Sapphire 8500. The rx480s have been looking interesting so I pulled the trigger on a pair of MSI GamingX cards.

Heaven Results at 4k (2x AA). Not sure what par for the course is but I'm just excited to be moving out of the stone age and thought I'd share. These bad boys replaced a 560ti. 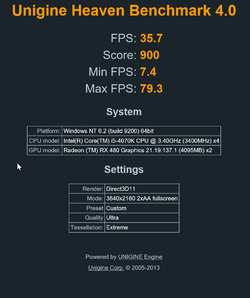 ..now to go play some Starcraft...

Nice! I got me a PowerColor Devil RX480 as replacement for a defective 390. Played The Doom demo and it was fantastic.
D

I'm finding these chips really love cold. The colder the better MHz/mV ratio you get.

I was maxed around ~1350 like you on AIR though. Switched to WC, and all of a sudden the GPU opened up. The mod BIOS thats going around doesn't even do much for me now that I'm on WC. Stock BIOS can get me 1.125V on load, which gets me up to 1425MHz Core for TB and games.

I stopped using the mod bios because Asus Tweak tool would not save my voltage on boot up, or at least it would once and than forget after the second. If I had a hard mod, I'm pretty sure I could get a lot more out of the card.

My bios' voltage max is about 1.115v or there abouts reported in Gpuz while gaming (FC4) @ about 1345. The mem however is another story as 2200 is pretty much the max as well. There are times my screen will go all white and I would have to back down the mem. 1350 on the core will result is screen freeze/lock.

I might have to go water on the card to see if my 480 will stretch it's legs like yours. Would be a shame if after I do slap a block on the card it won't make a difference

Your card is reference?


I have been using this unlocked bios: http://overclocking.guide/download/amd-radeon-rx-480-unlocked-air-bios/

Its only compatible with ASUS Tweak II, AB doesn't seem to recognize the difference in BIOS.

Yup, that's the "unlocked bios" for the Red Devil RX480 and no, it's non-reference design (longer pcb).

I don't think I can use the 2nd unlocked bios for my card. Using AB's new version works pretty good. AMD's wattman is confusing and I stopped using it as any setting I tweaked resulted in black screen/crash.

Anymore updates on this?
You must log in or register to reply here.

9
Help me with my i7 Gaming Rig Build